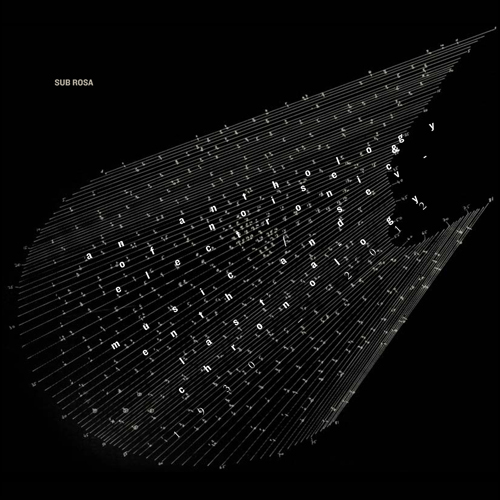 The seventh and final installment in Sub Rosa’s massive series. I’ll admit that this is the only one to which I’ve given proper attention, but with three discs totaling nearly four hours in playback, in itself it is an undertaking in terms of curation as much as in listening. While no compilation can ever really be considered comprehensive, Sub Rosa does the loose genre ample justice, covering not only a broad span of time (the oldest piece from 1930 and the most recent in 2012) but also in aesthetics. Not surprisingly, the terms “noise” and “electronic music” rae fairly vague. After all, how many times has any one of us heard someone describe music they don’t like as “noise” when in fact it’s simply pop music? My only point there being that “noise” means a lot of different things to different people and is often in the ear of the beholder. These three discs encapsulate the fringes of musicality into noise territory by virtue of a lack of discernible melody, song structure, or even rhythm in many cases.

I find it utterly fascinating, especially immersing myself so fully into this world in which I used to spend much more frequent time as a listener 10 or 20 years ago. Rarely does the music veer fully into the full-on sonic assault of an artist like Merzbow, but it does flirt with some pretty abrasive sounds, whether from an instrument like the guitar or from more concrete sor electronic sources. A nice aspect of this set when comparing it to a more self-proclaimed authority or primer on electronic music, like the 3-disc OHM set that came out in the 90s, is that Sub Rosa have opted to keep many pieces in their entirety here, rather than resorting to chopping them into edits or excerpts for the pure sake of variety or brevity. So while there are some concise, shorter pieces here, there are just as many that go well beyond ten minutes each.

Disc 1 begins with some of the earliest pieces here and starts off feeling a bit overly academic. Henry Jacobs’ “Sonata For Loudspeakers” was recorded in 1954 and falls loosely in line with other sound library recordings of its time, complete with Jacobs himself narrating the process behind the music (comparable to other fairly recent retrospectives of contemporaries F.C. Judd and Daphne Oram). Other early pieces by Dziga Vertov, Bebe & Louis Barron, and Bulant Arel share a similar exploration of effects and tape manipulations, with a standout being Luciano Berio’s “Thema (Ornaggio a Joyce)” from 1958, with its bending, warped voices and swirling sounds that still sound fresh today. It’s an interesting curatorial choice to then switch gears into contemporary music for most of the rest of this first disc, all post-2000 pieces by the likes of Slawek Kwi & Siobhan McDonald, Benjamin Thigpen, Hermut Schäfer, Thanasias Karpoulias, and Saule.

Thigpen’s “Thread0” from 2011 starts off with a shrill, high series of tones but then evolves into a chirping, squirming creature, sounding not unlike an homage to David Tudor’s  heaving, breathing, electronic organisms of yore. Karpoulias’s “The Insolence of a Poppy” from 2011, presumably a vague reference to Terry Riley’s “Poppy Nogood,” is a personal favorite, a meditative series of drones that eventually shifts focus towad an almost irritating supersonic series of tones. Saule’s “Paperfilm” from 2002 is another highlight, built largely around looping phrases of sound layered upon one another with feedback and effects, bringing the noise but in a somewhat lulling way.

The second disc is much noisier than the first, although John Oswals’s “Vertical Time” is a nice introduction that transitions from the first disc’s explorations. Israël Quillet’s “Pour Percussions et Saturation” is just what it sounds like: percussion and noise, fully saturated with distortion, and at 2:24, it’s just the right balance of brevity and abrasion. Pieces by Dennis Wong and Alan Courtis push the limits of shrill, textural noise, while selections from Justin Broadrick (of Godflesh and Jesu), Fausto Romatelli, and Storm Bugs are comprised largely (if not entirely) of guitar recordings.  The most satisfying and engaging pieces on the second disc for me are from E.A.R., whose music I hadn’t heard in some time, and from Henry Cow, whose bizarre “From Trondheim” almost certainly laid the groundwork for just about anything Nurse With Wound created in the early 80s. It’s Cow’s piece that I find to be perhaps the crown jewel of the set.

The third disc is varied, including late 70s drum machine experimentation (Cabaret Voltaire’s very early “Chance Versus Causality”), full-on rhythmic assault (“Blockade Is Resistance” by the New Blockaders, 1983), shrill, dense noise (Gustavo Serpa’s “Astro Metal,” To Die’s “Jurang Nustapa”), and absolutely terrifying vocal screeching (Warong Rachapreecha’s “Shambles,” from 2012). As in the other two discs, I tend to find myself most enjoying the pieces that incorporate varied techniques and dynamics, often touching on noise without fully immersing in it. Mika Vainio offers up a reliably doom-laden piece, “Transformer in 7,” while Klangkrieg’s “Korpus I” is a fascinating collage of objects and sounds. Jamka’s “Wild Rose Trees” is a healthy slab of post-industrial clatter and texture, another one of my favorites here. The odd man out is Agro/Brandon Spivey + Richie Anderson’s “Only Those Who Attempt The Impossible Will Achieve The Absurd,” a ridiculous acid-gabber track from ‘95.

Of course, I haven’t heard the other editions in the series, and so it’s hard for me to have context for this final installment in that scheme. On its own, however, it’s an impressive body of work from a wide variety of artists, times, and locations. This is very far from easy listening, but those interested in the outer limits of musicality and what “noise” can be in its various permutations and variations will likely find this to be a treasure. Highly recommended. (For American readers, it’s a total steal on Amazon for $15 digitally.)