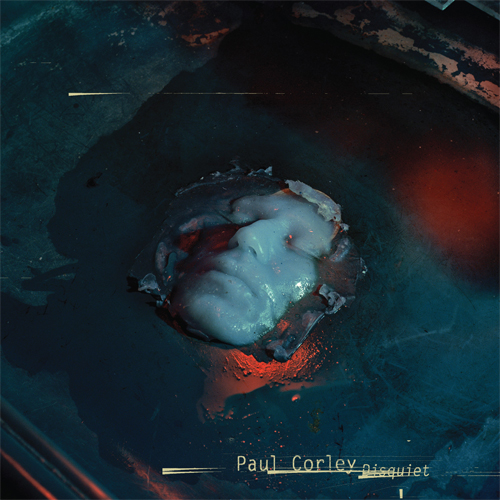 I’ve been waiting for just the right moment to review this album. I needed complete silence. I wanted a bit darkness. I craved a sip of wine. By now I’ve listened to Disquiet half a dozen times, and knew that a proper listening setting was required for my in-depth review. The time was now. I pick up the album, and look at the cover art. A blue waxy face is submerged in some liquid. I search for a higher resolution image on the web, and find a brighter version, where I can see this pale blue face mask lying on a surface, perhaps ready for its final mold. I read the title tracks again. The first is “She Is In The Ground”. Images of earth dropping on a plain wooden casket are blocked by my intense awareness. Sounds of the same earth dropping on the same plain wooden casket sneak through and bounce in my mind. I can never erase that one particular sound. This is not going to be easy. And I hit play.

At only fourty-three minutes in length (and four tracks in total), the debut album by Paul Corley is simply sublime. It has the same effect on me as when I first heard music by Ben Frost. Goosebumps. Mild heart palpitations. Slight dampness on the palms. There’s tension, but not in a stressed out way. More of a beckoning concentration. Like when you try to meditate and stay with the present moment. After the first ten minutes you realize it’s hard. And Corley doesn’t let you settle. There’s plenty to pay attention to. Plucked strings, a rasping something, a ripping scotch tape, a bouncing object on a prepared piano, a growling bass. There are no concrete melodies per se, but the abstraction in the music draws you in to place your ear against the wall, and eavesdrop on the sound, in curiosity, in peril, and in shame. Beyond that wall lie all your sketchy secrets, and Corley soon will have the key…

The reflective mood on the album drills deeper, scratching at the inner riddles of your suppressed psyche. Perhaps it is the wine talking, or the darkness, because this silence simply can not talk. Instead it’s filled with resonating echoes and vibrations, of sound pre-recorded far away. And are those memories or just imagination? And did that really happen in the past? And how on earth this little disk of ones and zeros can bring so much of this musician here and now? And where can I located the missing pieces – the limitless amount of which exists between those binary numbers. It’s got to be much more than ‘on’ and ‘off’. But in between the pensive notes and subdued strings, I hear Corley’s breathing. And then he shuts the lid, gets up and walks away…

“Disquiet is music that never settles. Music that makes the listener fiercely attentive to the present, to the very idea of listening. It takes some doing, and some patience, to produce an atmosphere so unearthly and yet so radiant, to organize fragmented – sometimes found – sounds into such sparse, sustained and spiritual coherence […] The album seems to be the recording of a dream, not necessarily Corley’s own, as if he slipped into the mind of someone asleep and calmly set up his equipment.”

Ah, but on one of the tracks I swear I hear Ben Frost in there again! Some passages remind me of By The Throat (Bedroom Community, 2009) [and how is it possible for that album to be three years old already?]. This can not be! Believe me, I dislike straight out comparisons, but there’s a deeper connection! You see, Paul Corley indeed contributed to By The Throat, along with Sruli Recht, Valgeir Sigurðsson, Lawrence English, and Nico Muhly, where he is credited with percussion, prepared piano, programming and engineering. He also appears in the credits on Ben Frost & Daníel Bjarnason‘s Sólaris (Bedroom Community, 2001). So yes, it all makes sense. He’s part of the Bedroom Community after all. It is a family indeed.

Be sure to read Interview with Paul Corley