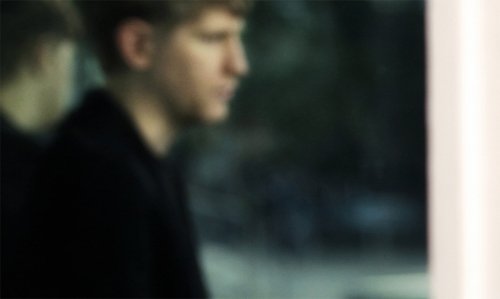 Hi Paul. How are you, where are you, and what have you been up to this past weekend?
I’m good, I’ve been working with Oneohtrix Point Never this past week in Brooklyn.

You’ve been lurking in the shadows for some time now. What prompted your decision to finally release a solo album?
It wasn’t a conscious decision. I’m always writing. I usually just finish things and move on. I’ve not really felt the need to release any solo work before now. The four pieces that make up Disquiet were different somehow.

And how long were you actually working on Disquiet?
Quite a long time. Most of my focused work is for other people. I try to separate my production work and my solo artist work. My production work takes up most of my time so the process of Disquiet was usually happening in the spaces between other projects. A slow burn in the background.

How did you join Bedroom Community?
Six years ago I moved to Iceland to work at Greenhouse Studios, the home of Bedroom Community, as an engineer. That’s how I became friends and colleagues with everyone. After a while these pieces found their way onto an album and I was fortunate it was released on BedCom. Since I had been there for so long I was part of the family, which is very much how the label operates.

You show a lot of restraint on the sound of Disquiet. What particular aesthetic were you going for?
No aesthetic in particular. I try to think about it as little as possible. It usually just comes down to listening and knowing when I’ve found the next part or the next sound that fits into the piece.

Pardon the association, but you and Ben Frost have been circling around the same sound stage for some time. He even returns the favor of your appearance on his past albums and plays guitar on a few tracks of Disquiet. Tell us a little about your relationship with Frost and your collaboration in the studio.
When I moved to Iceland Ben and I became friends and found that worked well together. We share some similar ideas about music and our processes in the studio are both very much results oriented. I’ve worked with Ben in a variety of roles from engineer to programmer to performer in studio and on stage. There is a constant flow of demos and works in progress between everyone involved with Bedroom Community. We all have our strengths and whether its just lending an ear or something more involved there is always some sort of musical exchange happening.

There are a lot of sparse field recordings and non-incidental capturing of all aspects of instruments themselves. These particular elements really make the listener focus on all parts in play. Tell us about the art of listening…
Listening is the most important part of my process. Much more than any technique, piece of gear, skill, etc. Put on a Chris Watson album and you can learn more about the art of listening than I could ever attempt to explain.

What’s happening on that cover art? Is that some wax mold of your face?
Yes its a silicone cast of my face. I had 2 casts made and send them to Alexander Gehring to photograph. He and I discussed ideas for the artwork and he executed it amazingly.

I hope that this is not the last Paul Corley album and we will hear some more! So what’s next?
I’m working on another solo album, Also some sound recording projects and installations. I have a new piece that I wrote for Violist Nadia Sirota on her upcoming album. She’s amazing and its a crazy piece of music. As far as my production/engineering work goes I’m doing some work on new projects from Tim Hecker, Oneohtrix Point Never, Ben Frost and some other Bedcom releases.