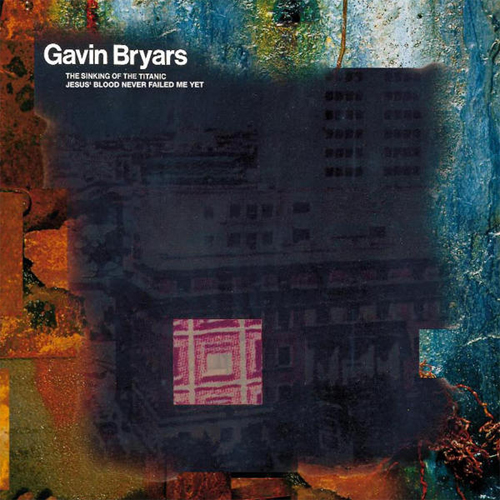 Going to a live performance is more than just an experience for the duration of the show. First of all, there’s that whole act of “going”. And prior, the anticipation thereof. The buildup, if you will, of an upcoming evening in the company of musicians, fellow sonic connoisseurs, and a few alcoholic beverages. Saturday nights are the best, but I made an exception on this past Sunday to venture into New York City, to witness a live performance of Gavin Bryars‘ The Sinking of the Titanic, by Ensemble LPR and Wordless Music Orchestra at the beloved (Le) Poisson Rouge. This venue, located in the heart of NYC’s premiere music spot, is quickly becoming one of my favorites. I’ve spent a few nights here already, enjoying the crispy and bass-heavy electronic sounds, but this was the first time when I got to see a live orchestra.

Upon my arrival I immediately began observing the crowd, and noticed that… that I was probably the youngest one. That’s not particularly surprising, considering that Bryars composed the score back in 1969, and that the gathered aficionados were most likely his fans for over 40 years! The crowd shuffled down the stairs into the performance space, which suddenly took a more sophisticated atmosphere than I remember from my last visit (I saw Sepalcure and Africa Hitech back in November). The stage became a seating area, while the dance floor – the stage. Individual tables were setup very close to the orchestra, creating a cozy and intimate environment. Once the music began, this configuration was particularly special to my heart – the last time I sat this close to a cello was when I was playing an upright bass in high school orchestra. 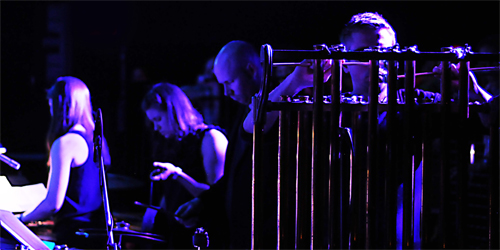 The piece opened up with a summoning gong, followed by the rolling thunder of an assorted percussion, beating the wooden blocks in what may be a Morse code rhythm for a distress call. The violin section picked up the opening, proceeding to measure out equal bars of a major-scale hymn, reminding me a bit of a chord progression from Amazing Grace. One of the disaster’s survivors later recalled that he heard bits of Episcopal Autumn hymn as the ship tipped upright on its nose and began to sink. Members of the orchestra gave cues to the music by raising their eyebrows, and frowning their faces, revealing the secrets behind the score – perhaps that one last note was an intended surprise in the movement that I should have picked up on. The players’ delicate fingers danced on the violin necks, their bodies rocking with the movement, making love to the music and space. 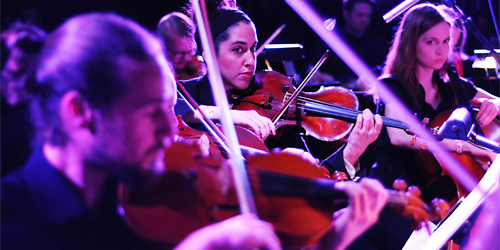 Electronic static, radio frequencies and bits of [intended] conversations echoed over the music, occasionally colliding with camera shutters, clanking utensils and bits of [unintended] waitress’ last calls. The most poignant samples came from the recordings of interviews with the survivors of the disaster. Music flowed from every corner of the venue, mixing in with a wide range of industrial sounding objects, attempting to replicate the sounds of bent, scraped, and twisted metal. A bass clarinet woke up from its solemn meditation and cried out in angst as the ethereal choral voices faded away. I even watched a percussionist drip water into a metallic bowl in front of a microphone. I wondered what that particular direction looked like on sheet music. 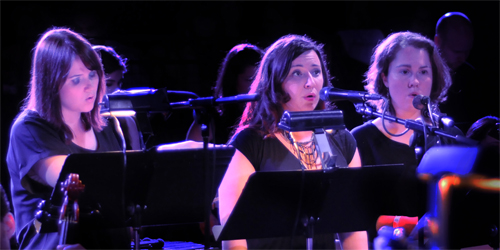 The piece was beautiful, the experience unique, and the performance expertly executed in the hands of a renowned orchestra, most celebrated for their concerts with Radiohead guitarist Jonny Greenwood, the Japanese instrumental post-rock group MONO, and former Battles multi-instrumentalist Tyondai Braxton. The orchestra is composed of New York’s young musicians and members of groups such as Ensemble Signal, Alarm Will Sound, ACME, and Bang on a Can. The Sinking of the Titanic was first recorded and released on Brian Eno‘s Obscure Records in 1975. In 1994, the piece was remixed by Aphex Twin as the Raising the Titanic (later appearing on the 26 Mixes for Cash). This particular perfromance was presented on a centennial anniversary of the day of the Titanic’s sinking, on April 15, 1912.