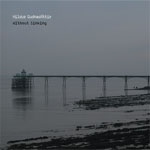 It is dark, dense, and brooding. The sky is gray. Winter is refusing to leave. Wind becomes the rhythm; dissonance – the melody. In the delicate hands of the Berlin-based (but Icelandic by birth) Hildur Guðnadóttir, the cello whispers and moans. Perhaps it’s grieving for an uncertain future, perhaps accepting a buried past. The voice of sorrow seeps through the trembling fingers and saturates everything around it with something invisible, but wet and salty. Then, a heavy, thick and warm knot builds up inside my chest. And when I sigh, it escapes in a condensed vapor, ascends past the naked tree tops and joins a dark cloud in a stubborn winter sky. Finally the rain falls. And I cringe at all the pain.

Hildur Guðnadóttir is not a newcomer to the scene. As a classically trained cellist, she has previously performed with and contributed to works by her Icelandic contemporary artists such as múm, Valgeir Sigurðsson, and Ben Frost, as well as Hafler Trio, Nico Muhly, and even Pan Sonic. For Without Sinking she was able to round up a talented group of friends, like Skúli Sverrisson, the prolific Jóhann Jóhannsson, and her father, Guðni Franzson. Dropping all of the above names should give you a brief idea of the circle that Guðnadóttir revolves in. I guess it’s not surprising, since she is an active member in the neu-Iceland collective, Kitchen Motors. This is _the_ Reykjavík music scene think tank, owned and operated by Jóhann Jóhannsson, Kira Kira, and Hilmar Jensson.

Without any exaggerations, this is indeed an acoustic modern classical marvel. Absolutely a must for this year! Add Without Sinking and Guðnadóttir’s previous works to your collection. The debut album Mount A (12 Tónar, 2006) was originally released under the moniker Lost in the Hildurness. Her recent one-track complimentary release to the album, Iridescence (Touch, 2009), is only available as a digital download, as part of a new series of digital singles launched by Touch on April 1st. On May 16th, 2009, Hildur Guðnadóttir is scheduled to perform for Short Circuit, A Festival of Electronica, during a Touch showcase along with BJ Nilsen, Philip Jeck and the Gavin Bryars Ensemble, and [back on the road!] Biosphere!!! If you’re anywhere around The Roundhouse in London, please go… For me…