I just spent my first week with Spotify (since it went live in US), and I’m already reeling from all the music that now I have access to. But being overwhelmed by a nearly unlimited catalog of digital media makes me want to pay even more attention to handcrafted and meticulously produced albums. Labels like Hibernate Recordings strive to remain if not profitable, then at least relevant in this music industry, and it is the focus to detail, both from the label and the signed artists, that continues to retain my faithful following. Support for this type of music is easy to provide – if you like it, buy a limited edition physical copy directly from the label – you will have a piece of history in your hand, holding one out of a hundred limited copies. And if it’s already sold out, you can always buy a digital copy from bandcamp, or at least send a ‘thank you’ to the artist. I may be just rambling here, but the recent exposure of an enormous digital library on Spotify once again reinforced the concept of appreciating music, made with one major ingredient: love…

This Sound Bytes entry is accompanied by an exclusive Hibernate Mix. Make sure you also read [ part one ] and [ part three ]

Field Rotation – And Tomorrow I Will Sleep 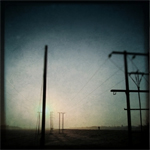 There seems to be more than just a collaboration between Daniel Crossley‘s Fluid Audio and Jonathan Lees‘ Hibernate Recordings on compilations, such as the Japan benefit release, Kanshin — some artists appear to migrate, or rather float, between these independent labels. Christoph Berg, recording under his alias Field Rotation is one of those lucky fellows who seems to have a deep well of inspiration, artistic creativity, and genre spanning output. After a few carefully crafted releases, Lich Und Schatten (2009) and Acoustic Tales (2011), Berg emerges on Hibernate with a conceptual album, produced and recorded after many sleepless nights. Designed to serve as Berg’s own lullaby, the slow moving drones and peaceful waves of sound swell and recede in the peripheral auditory field of the subconscious mind, settling the thoughts that rewind the remnants of the day. Gentle strings seep through the frequencies, and penetrate the half asleep brain, painting fractal patterns of colorful light behind the closed eyelids. The six tracks on the album are almost designed for a short day-time nap of an agitated patient, cycling through names like A dimly haze (Asleep Pt. 1), Shoreline (Adrift, Dreaming), Slumber, and finally Swayed by the wind (Awakening). Packaged with extreme care and personal touch, each physical copy is wrapped in a hand-cut personalized envelope (mine came with my printed name!), in a hand sewn fabric sleeve. The cover art is by none other than Antonymes with a mastering touch from Rudi Arapahoe. I almost can’t wait for my next jet-lag – I will surely remember to put on this wonderful album and enjoy the fantastic atmospheres that it offers right beneath the thin veil of dreams. Good night… 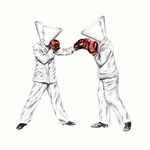 After his 2009 solo debut Harsh, Final. on his very own White Box label, Danny Saul lands on Hibernate. The cover art, titled Boxers by Rachel Goodyer, is at once mysterious, and perhaps a bit deceiving. With a few photographs of American stand up comedians Sam Kinison and Bobcat Goldthwait, and the reminder of their feud over the origin of their act, the over aura only intensifies the feeling of action, dispute, and fierce confrontation. Yet the music of Kinison – Goldthwait is nothing of that sort. Ambient excursions into incredibly textured sound fill my room with a sense of longing, sadness and nostalgia. Titles of the tracks hint at a deeply rooted conceptual work, but in fact provide an ‘ambiguous narrative’ as Saul himself admits: “Throughout working on this record, for some reason, I couldn’t stop thinking about these three people and this particular incident on the Howard Stern show”  – The argument between the comedians became explosive when Howard Stern added some fuel into the fire on his radio show – “That’s not to say the music or album is in any way conceptual – it isn’t.” The atmospheric pads, deep rumbling drones, and reverb drenched guitar loops, build up towards the second half of the album, exploring minimalism, dynamics, and deconstruction of what should be a recognizable instruments into their blistered, raw, material form. Sine waves oscillate, then go out of phase, fighting for the lead, until they are thrown off by hungry distortion that once again climaxes and dies. Perhaps the concept of the album is there all along, and instead of comedy, Danny Saul is able to convey the duo’s tragic rivalry through music. Highly Recommended! 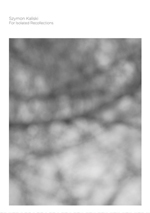 Simple keys and sounds of a water stream seem to be the minimal elements comprising the four-track ambient release by Szymon Kaliski, a young musician from a small town near Poznań in Poland. For Isolated Recollections is a sixth installment in Hibernate‘s Postcard Series. Designed out of delicate loops and field recordings, the recordings are at once basic and complex, like the Buddha’s lotus flower sermon, surrounded by complete silence. Hinting at inner insight and personal reflections in isolated surroundings, these miniature recollections offer a meditative soundtrack to a restless mind. With lo-fi crackle, static and organic imperfections, the sounds are left to unfold at their own pace, in their own space, free of structure and suffocation. Kaliski’s previous release includes an digital release on David Newman’s Audiobulb offshoot, Audiomoves, titled Out Of Forgetting (2010). Easily a candidate of future signing to pioneering electro-acoustic labels like 12k, Kaliski demonstrates a complete restraint and control over the sound, which is a welcome breath of fresh air, in a densely populated bombardment of everyday frequencies. All physical releases in the label’s Postcard Series are strictly limited to 100 copies. With many past installments already out of stock, I recommend that you reserve your physical copies. Some digital versions (including this one) are available directly from the artist’s bandcamp site, with no set minimum price. File under hauntology.