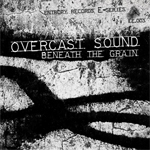 You don’t have to descend into a deep cavernous space inhabited by the hollow reverberations of the Overcast Sound – you’re already there. You don’t have to close your eyes to embrace the darkness and inhale the dampness – the candles are already gone. You don’t have to travel back in time to enjoy the memories of the early minimal, dark, atmospheric and dub techno days – the duo brings the sweating warehouse walls and vibrating concrete hallways into your home. In fact, no strain is necessary on your part today – sit back, relax, and enjoy the passage. Here’s how it works. Deep vibrations bounce off the ceiling, drop on the floor, and jitter the air condensed with thick humidity of sound, thick enough to suffocate the breathless, until the fluttering of the closed hi-hat cuts through the layers and sets the rhythm of the groove. Atmospheric pads hide behind the old school claps, while a mysterious and musky voice recites some syllables in German. Hypnotic beats pulsate over never ending loops, metallic minor chords, and the darker side of dub techno. This may not be a familiar place, but nevertheless a place you’ll call home.

Beneath The Grain is the debut full length release by the Canadian duo, Overcast Sound. Although Michael Pettit and Jamie Drouin have already released a handful of digital EPs on their own similarly titled label, as well as on Silent Season, basic_sounds and Rohs!, the album marks their first cohesive output, spanning an hour of a mind bending trip. Overcast Sound is no stranger to top notch quality production – created for a huge sound system and headphones alike, the album oozes with the low fidelity crackling of  vinyl and at the same time rich reverberation of a powerful DSP. The pristine qualities of the sound design behind the album do not come as a surprise. Jamie Drouin is a sound installation artist, exploring silence, noise, and “auditory phenomena of environments”. He has previously released albums on Yann Novak’s Dragon’s Eye (check out A Three Month Warm Up [2009]), and his very own, Infrequency Editions (see his latest collaboration with the co-founder of the label, Lance Olsen, on Absence & Forgiveness [2011]. I can only speculate that Michael Pettit is the man behind the analogue sounding percussion and the driving beats of the sound on Beneath The Grain.

The album, drenched with German influence, is the result of the duo’s three-month residence in Berlin. “Each track investigates a particular place or theme discovered during their residency, drawing from the textures and sounds unique to those experiences. The ethereal vocals in Devil’s Mountain make reference to the crumbling Cold War listening station on the outskirts of the city, while Lackadaisical bubbles and meanders with the reflected sounds of inner city parks and neighborhoods.” So it’s no sacrilege if I throw out label names like Force Inc., Perlon, and of course, Basic Channel. Released on the French Entropy Records, the album marks a welcome entry intro the arena of the masters such as DeepChord, Quantec, Thomas Fehlmann and Monolake. Check out Overcast Sound’s EPs – The Changeling, Green Space, Losing You.  There’s also a free Holding Patterns Remixes release out on Basic Sounds. And be sure to grab a free mix put together by the duo for Headphone Commute’s podcast, titled April Ambient Mix.