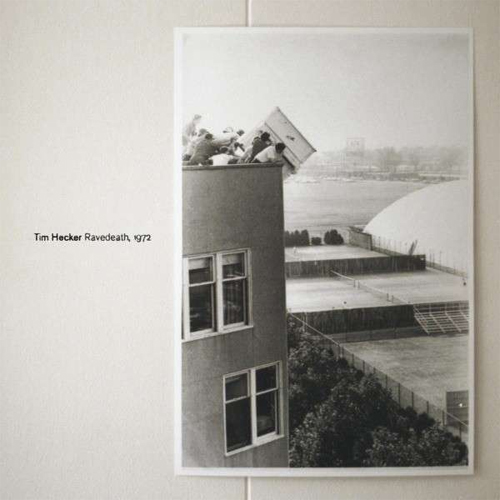 When winter arrives and the sky goes grey I like to close the blinds of my apartment, turn the heater up to eleven and cuddle up in my bed. Usually this custom of mine goes together with the computer placed on my bed and a thick blanket of music that fills up the air around me. When this morning I glanced outside and there was no apparent source of sunlight to be seen, the never-ending stretch of clouds had me a little bit excited as I figured this would be the perfect moment to experience the new Tim Hecker release, on the Chicago based Kranky imprint.

Ravedeath, 1972 is the result of a live improvisation session in a church in Reykjavik and the studio process that followed afterward. Recorded with the support of none other than Ben Frost, I anticipated a throwback to the guitar themed noise that was so prominent with Hecker in his early EP, My Love is Rotten to the Core (Substractif, 2002). The two installments of “Hatred of Music”, “Analog Paralysis” and “Studio Suicide” also had me brace for a grim listening experience much like Frost’s By the Throat (Bedroom Community, 2009). But when the heavily edited organs start to buzz through my room, it seldom had me grind my teeth.

Not that this is a bad thing. Hecker playfully combines his characteristic chromatic chords and dissonant layering of sounds with the special qualities of the ‘studio’. The acoustic of the recording location rubs off on the already churchly character of Hecker’s work. He takes full effect of the reverb that the church permits, creating even more dense structures with each layer of sound folding up on itself. The record does not get violent or grim, instead it feels like a careful study of different motives that entrance the listener.

“In the Fog” is a suite consisting of three pieces that starts out with a landscape of sounds that has different tones colliding with one another much like waves hitting other waves near a cliff. At the end of the first installment, a rhythmic pulse sets in and the music becomes more fluent. This sine wave, that reminds me a lot of the pulse used by Jim O’Rourke in I am Happy and I am Singing and a 1, 2, 3, 4. (Mego, 2001), gradually fades out during the following section, before coming back in “In the Fog III”. The inclusion of touches of the piano at the start of the third section is maybe a sign of Frost’s presence. This together with the buzzing pulse and a growing almost dronish noise makes this the standout track for me.

“Hatred of Music” starts out with high pitched ethereal waves of noise in which textures slowly turn into something darker. The light tones are transformed into multiple layers of sound that take shape in a grim dissonant sound sculpture. It is the first and only sign of the unnerving atmosphere I anticipated when putting on the record, but the moment is fleeting and quickly dissipates growing into a calm yet dark soundscape. The triptych “In the Air” functions as some kind of closing piece of the album. It starts off really accessible with nice soothing tones, but gradually gets filled with Hecker’s heavy chromatic chords.

Ravedeath, 1972 very much builds up on his previous work. The typical dense layering of sound is something Hecker has mastered like no other and the abstract form of his music creates a different experience for every listener and on each listen. I feel as if Ben Frost’s major influence was in the inclusion of some more pure tones. Both the touches of piano in “In The Fog” and the steady guitar based drones that are present in “Hatred of Music”. This is good music to listen to or rather experience on a day when the weather does not let up. Recommended for listeners that enjoy Fennesz, Stars of the Lid and Lawrence English.