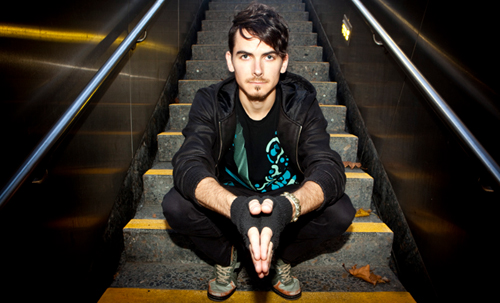 I noticed that you’re using vocals on the album (your own voice, right?). How has the Eskmo sound evolved over the years?
Yep I’m singing. I’ve had tracks along the way since the beginning where I put my vocal in there as a hook, but this recent album was the first full on diving in to take it to another place. I know the sound right now in the electronic world (for the most part) is all on the r’n’b tip with vocals, but that’s not what inspires me. The idea of ‘characters’ inspires me no matter what the sound, so I took that and ran with it. Ultimately the music has always stayed true to being a reflection and metaphor of an inner process that has been happening within me over 10 years. The ways in which it has changed would be, the most obvious, in terms of production levels / concepts. But more deep than that would be the way I approach the tracks. Whether from a place of 2005 or 2008 and trying to write something that sounded ‘heavy’ and could make the dance floor go wild, to the more recent material which explores some more emotional terrain. Lately I’ve really allowed the idea of storytelling and memes to come through no matter if that places the track into a gentle area or the opposite, an uncomfortable or challenging one. Either way, I feel more is being said than me still going down the route of dj oriented tracks. (Not like I would ever get that big in that world anyways cause my stuff was always a bit ‘odd’ for most of dj crowd).

The latest music video by Cyriak Harris for “We Got More” kicks Inception’s butt… Tell us more about videos that are now featured with your album. How have these complimented your music?
The first was “Cloudlight” which was directed by my friend Dugan Oneal. The 2nd was the video you mention. I’ve been real blessed to have been able to work with these two directors. Each song definitely comes from its own little world and different intention was put into each. We (Ninja and I) wanted to show 2 very different sides to the Eskmo character. Cloudlight comes from a very personal subtle sorta place. There is lots of story behind that one. I knew before the album was even done Cloudlight needed a video, but Pete at Ninja convinced me to do one for We Got More. They knew Cyriak (I hadn’t heard of him before), and I trusted his judgment that it would be a good fit. And luckily it definitely was. I feel he nailed the exact quirky vibe I was hoping to achieve in tune.

Your signing on to Ninja Tune has definitely brought more attention to your music. Talk about the new opportunities that have presented themselves since the signing.
Signing with them has been a great experience. Their presence is so well established already and the fact that they are putting in a whole new level of focus into the brand and label these past couple years is just exciting. Through this I’ve been able to travel to new spots in Europe and Japan as well as meet a whole new crew of musicians I may have not encountered otherwise. It has also has brought its own set of challenges, which I also try to see as opportunities to grow. Releasing the music to such a large audience and with this much force behind the release brings a lot of leering eyes. Your work just gets examined in a different way. Especially if you don’t give critics what they were expecting. I look at all this as chances to expand my sound and view of what this all means to me and how I might grow from it.

Do you think we’ll see more material from your other project, Welder? Also, how would you classify the separation of sound between Welder and Eskmo?
I’m currently diving into another full length Welder release right now. Welder is the gentle, inward, very organic sound in me. No attention paid (for the most part) to bass lines or anything that feels the need to make a track ‘hit’ on the dance floor, where sonically or to make people bug out. Once you enter than sort of territory, the whole game changes. Eskmo, is the more open, outward, big sound. He understands the dance world and intentionally messes with it, where as Welder doesn’t even acknowledge a need for playing with the rules, cause there aren’t any. At one point I thought to make them extreme opposites from each other, but I could never bring Eskmo to be an annoying dance anthem character and still be ok with myself. I’m curious to see the direction of this next Welder album.

What are you working on right now, and what’s next in store for Brendan Angelides?
This Welder album…