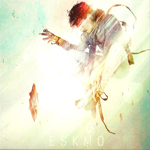 Well, it looks like after a few years of being quiet, Ninja Tune finally got their $h_t together and released an excellent album, by a long time favorite of mine – Brendan Angelides. This San Francisco based beat master has been dropping tracks for over a decade now, releasing under Eskmo and Welder on a variety of 12″ and digital labels. Then, out of nowhere, in 2009, Angelides landed an EP, Let Them Sing, on Planet Mu. Soon after, he released a digital EP on his own label, Ancestor, Hypercolor (see our review in Sound Bytes), which he followed up with a single track, collaborating with Amon Tobin as ESKAMON. I bet that got the world’s attention! In 2010, Eskmo landed a split with Eprom on Warp, and after the Cloudlight single release from Ninja Tune, the rest became, as they say, history. Here’s a taste of Eskmo’s latest work from the self-titled, Eskmo album:

Be sure to pick up Eskmo, as well as his previous releases, Ascension (Eskmo, 2003) and one of my all time favorites albums as Welder – Vines And Streams (Cyberset, 2006) and Bamboo Snow EP (Native State, 2007).