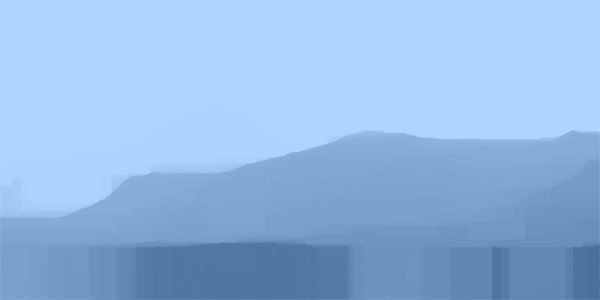 First of all, I have to ask about your moniker, TU M’, which is named after a Duchamp’s painting. What is the association, if not fascination, with Marcel Duchamp?
Tu m’ is a painting whose complexity and mystery has always fascinated us. In 1998 we were struck by that grouping of real and symbolic elements, the idea of the realization “of a painting of cast shadows”, in an ambiguity of shapes and contents. Like that apostrophe in the end of the name, for example, which was put there to indicate an incompleteness which only the spectator/listener can fill up. A silent collaboration between author and spectator where, in the best of cases, the roles are swapped.

Describe the process of the live audio performance and its connection to the video. What software/hardware do you use to sync up the two?
We are not interested in the synchronization of two or more types of media, for example, an immediate reaction between cause and effect; but, rather, the juxtapositions of two elements and their possible resonances. In TU M’ we have this idea of the duo/double which has accompanied us for years: the two identities, the two laptops, the horizon line, the analogue and the digital, audio and video etc. Elements that when brought together, project a third shape, a vibrant shadow.

Is there an audience present in the room during the performance, and how much of their participation affects the outcome?
No, there is no audience during our studio performances; the room must be a place of silence and absence. However, right when you press REC on the recorder, you are connected with a possible audience that, sooner or later, will listen to your work, and therefore you have to be very clear about what you would like to express. We are intrigued by the idea of creating music for a single listener, and also how he/she relates to it in the various daily contexts. We are interested in the intimacy between the piece of music and the spectator, in the same way a painting is approached to in a museum, or when the work is left alone to be later found again, we do not believe much in a collective fruition.

What is the modular source of the generated audio? Are there any field recordings?
In 2006, after the last recording session of “Fragile Touch Of The Coincidence”, we realized that we were increasingly using less instruments to compose. We gradually went on from the composition of 24 channel multitrack to the live stereo recording of laptop improvisations. We removed every external sound source, like acoustic instruments, field recordings, etc. and we decided to use only loops generated synthetically by laptop/Reaktor, reprocessing them live through a digital/analogue feedback. Thus, we decided to rid ourselves of all that unused instrumentation, to remain with only: 2 laptops, 2 mixing-boards, 2 headphones, some cables and a 2-channel recorder; the basis for the future project “Monochromes”. Currently, accompanied also by a setting of the 2002 Reaktor, our instrumentation has remained almost unvaried. We see the laptop and the mixing-board as veritable contemporary musical instruments with their own voice; a metaphor of the double, of the digital and of the analogue, in the search of a coexistence, or maybe of an exchange of identities.

Can you elaborate on the quote from Jean Cocteau? Are you purposefully limiting yourself to the quantity of material in music and video?
In 2006, we started to delve deeper into the study of ars antiqua, of chamber music, of landscape painting, and of the softsynth; trying to investigate the possible limits of the duo, of the instrumentation, of composition. While rereading some notes, the following quote emerged: “A poet always has too many words in his vocabulary,  a painter too many colors on his palette,  a musician too many notes on his keyboard.” Not by coincidence, from “Le Coq et l’Arlequin” by Cocteau; right in our most subtraction period. A 1918 sentence, written subsequent to San Francesco d’Assisi but before Donald Judd and which revealed a current state and a possible direction towards a greater awareness in making decisions. Giving a greater importance to the action of choosing.

When is the second volume out? And are there any plans on releasing Monochromes on Video?
We decided to work calmly and to record the new compositions only in four sessions during the year. The silence and the time between a session and another are as much important as the composition itself. We think that “Monochromes Vol.1” still has much to say, even in the coming years.