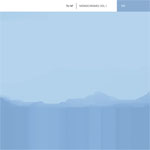 Monochromes Vol. 1 is the first volume of archival installations by the Italian multimedia duo, Rossano Polidoro and Emiliano Romanelli, performing under the moniker TU M‘. The name, taken from Marcel Duchamp‘s same titled painting, is a French expression in which the verb is missing (tu m’…). This literally translates to “you […] me”, where the missing verb must be provided by the viewer (of the painting), or, in this case, the listener.

The album, released on Richard Chartier’s LINE Records, features the first four (out of nine) audio compositions, created for “two laptops, two mixing boards, two loudspeakers, one video projector, [and] one room.” These pieces were recorded live at Vico Santa Chiara Studio, Città Sant’Angelo, Italy in the summer of 2008. For the installation, the duo create an atmosphere where “sound and light vibrations reverberate inside the room, blending together in an enveloping monochrome, that creates an atmosphere to be contemplated.”

The visuals, available as excerpts on the TU M’s website, are composed of drawn out monochrome landscapes, resembling distant mountain silhouettes and sluggish geometric figures, visible in change and movement only through sporadic skipping through the captures. Attempting careful observation, or trying to make out patterns that are not there, is futile. It’s like watching yourself age in the mirror. It’s like watching the clouds…

The audio compositions paint the same picture. Over a slight white noise hiss and endless loops, the melody swells in ambient waves of sound, sparkling in the light of distant piano notes. Like the waves of an ocean that have been crashing against this beach for thousands of years, and many years to come, this music is new and ancient – it exists _all_ the time, somewhere completely on its own, only to be summoned into this moment with the press of a button. The sounds fade in and out with the rhythm of my breathing. Inhale soft pads. Exhale minor chords. Let this pattern wash away all worries. And when the [almost] 30 minute track ends, the melody is still there, in the background of my mind.

To round off this exploration of space, sound, and light, intertwined together to create this minimal composition, the duo includes a quote by Jean Cocteau:

A poet always has too many words in his vocabulary,
a painter too many colors on his palette,
a musician too many notes on his keyboard.

Check out previous numerous releases by TU M’ by rummaging through their sound and visual works, carefully catalogued on their website. Their project under the name of Steno, for example, describing themselves as “a world made up of second-hand music“, is released on their own, Mr. Mutt label, which, not coincidentally, is the name Marcel Duchamp signed on the upside down urinal, and named his found art as Fountain.

See also Two and a Half Questions with TU M’