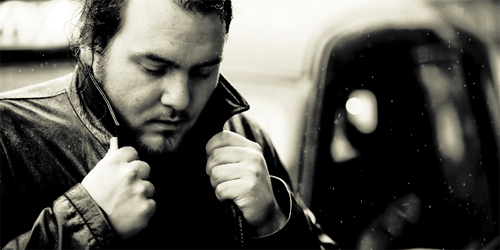 Can you provide us with some background on the locations referenced in song titles?
A lot of the track titles are names of places in the South West of England that I associate with my childhood or adolescence. I grew up on the edge of Exmoor national park, which is a really beautiful part of the country; very empty, and quite bleak and melancholy. That landscape really haunted me as a child, and had a profound effect on my imagination, I think. Some of the other tracks are named after nearby places in North Somerset where my mother’s family had a seaside holiday home – those are the “Doniford Beach” and “West Quantoxhead” pieces. I lived alone for a whole summer on Doniford Beach, and without sounding too corny, that time had a very strong affect on me in terms of my personal development, my ability to appreciate solitude, and to feel connected to the landscape and area. A good deal of the mood of that time went into this record, I think. I was really on a kind of nostalgia trip with this record, and so some of the tracks, like “Where We Walked” for example, are named after some pretty personal things; when I was making that track I was thinking back to a time when I was 17 years old, and a long morning walk I took on Doniford beach with a guy who shortly afterwards became my first boyfriend. That was pretty crucial day for us, but while we were walking, I remember him randomly suggesting that “Where We Walked” would be a good track title for my kind of music. For some reason that stuck in my head, and seeing as the memory of that walk was in my head when making the piece, it seemed right to finally use it as a track title.

Please describe your production workflow. What software and hardware did you use?
I hardly used any software or hardware, actually. It was mainly made on tape. The album was made out of a series of ambient recordings I’ve been making on tapes for many years now, nearly fifteen years actually, going right back to my school days. The compositional process mainly consisted of collaging these various sketches, layering them on top of each other, and finding out which ones fit together. To do that I had to transfer the original recordings from my old four track tapes into a digital format, but aside from converting them and importing them into Adobe Audition, I didn’t tamper with the tracks very much at all. The original recordings had a lovely lo-fi, tape-y quality that I wanted to retain, and there was very little processing involved other than what went down onto the tape at the time of recording.

What instruments were employed to create riverrun’s dense atmosphere?
I normally just worked with my guitars and some really cruddy, broken down keyboards! Quite often they were detuned or transposed to extremes so that I could get some really interesting, bass-heavy sounds, and I re-pitched and slowed down a lot of things digitally. I used various old percussion instruments, like an old rainmaker and some bells, and I had some field recordings that I threw into the mix. But there weren’t any really unusual instruments being used; it was mainly a case of using conventional instruments more as noise-generators than in their usual capacity. One of the things I’m most happy with was being able to use my voice in a really interesting and subtle way; there are some vocals on the record, but you’d never notice them as such, because they’ve been bent out of shape by various effects and treatments. In fact, some of the things which sound like animal noises are actually me, just slowed down or processed beyond recognition! I really enjoyed using my voice that way.

Can you tell us the meaning behind Pentimento? It seems to perfectly describe the music.
It’s an art term and what it means, basically, is an artist painting on top of a previous painting. With some paintings it’s quite apparent that the artist has changed their mind halfway through the process, maybe because they changed the structure of the composition, or just because they thought the first version stank and needed to be painted over! Hahaha. I thought that the process of making this album was kinda 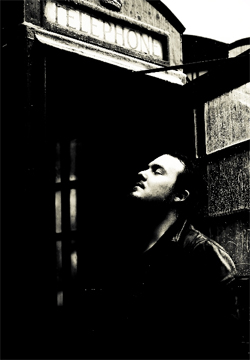 similar to that, because I made the album like it was one big canvas, as one continuous audio file. Each time I added a new musical element, I did a complete mixdown of the whole thing, and deleted the component files… this meant that once I had added something, I was unable to remove it or change it, a bit like in painting where your only real choice is to paint over the things you don’t like. Now, I think most musicians would say that this is an absolutely suicidal way of working, and I’d certainly agree with that! But what was interesting for me was that it really, really worked for this style of music. I liked putting myself in the position of being unable to retract mistakes and of being unable to go back into the mix to “fix things up”. I became very skilled at painting-over things – as it were – and if I did something I was not entirely happy with, I would just add more stuff on top of it, to ensure that the part I wasn’t so happy with was pushed further back in the mix. What this means is that the whole history of the work is present at all times, even the mistakes – and “behind” the record is a whole level of subliminal detail, right at the fringes of perception, of stuff I wasn’t so happy with. I really like that, actually. It gives the record depth. It’s a bit like that Brian Eno trick of mixing something almost “out of earshot”; I’ve totally stolen that idea from him.

Will you continue collecting sound samples to compile future projects?
Yeah, I’m collecting already, and have a lot of new ideas. I’d say I’ve probably got about half of a new album ready to go, and there’s still a vast treasure trove of the older tapes that I’ve not got around to listening to yet. It’ll take a while, but I don’t think it’ll be another ten or fifteen years! Now that I’ve made one album following this process I have a much clearer idea of what to do and what to look out for. I’m expecting to have another album ready for early next year.

What motivates you to create something so diametrically opposed to your work with The Modern Painters and Engineers?
Well it’s funny, because when the riverrun album first came out I did think that there was a big gulf between my “song” work, and my “ambient” work, and I did an interview in which I said that I felt the two were diametrically opposed to each other. But as time’s gone on I’ve become less certain of that, really. Obviously the two styles of music are very different but in terms of an approach to sound I can see that there are a lot of similarities; the key thing for me was realizing that with both types of music I’m really concerned with the same thing, which is to do with the more environmental aspects of sound, of creating a sonic environment that totally envelopes the listener. Also, I’ve also realized that what I learn from working in one discipline I can subsequently apply to my work in other areas, in very interesting ways, so it’s good crop rotation for me. I guess I’m pretty restless musically, I like to follow my whims and so it’s good have a couple of outlets for my stuff at any given time.

Any chance you might collaborate on a project with Ulrich Schnauss?
We already are, kind of. Ulrich mixed the Daniel Land & The Modern Painters 7″ single that came out a couple of years ago, working with Mark Peters from Engineers; I think they both really enjoyed working on my songs, and we talked about maybe working together as a trio at some point. Then last year the original line-up of Engineers folded, and Ulrich and I both joined the band as full members, so we will all be collaborating on material for the next Engineers album. As for whether Ulrich and I will collaborate directly on anything else, I can’t really say as yet. We have an idea for one future project, but it’s still very pie-in-the-sky, and nothing’s confirmed yet.

What artists have most influenced your work?
For this project I’d say I was mainly influenced by the classic ambient artists like Brian Eno, Harold Budd, Harmonia, Biosphere, and so on, although shortly after finishing the record I did pick up the d_rradio album “Leaves”, which I thought was in a similar area to riverrun, and I was quite impressed by it. Outside of ambient, I’m most influenced by artists like The Blue Nile, Slowdive, Peter Gabriel, Cocteau Twins, Spiritualized, Laurie Anderson, and a lot of the classic stuff that was on 4AD. I guess like most musicians though I have pretty catholic tastes, and a lot of what I listen to doesn’t bear much relation to the music I make. For instance I’m a massive fan of Latin American music and world music generally, but I don’t think that really shows in my work. Yet. Hahaha.

Please expound on the impact that James Joyce’s Finnegan’s Wake has had on your work.
I’ve always been a great admirer of Joyce’s work, and of Finnegan’s Wake in particular. The name riverrun comes from the famous opening line of the novel. It’s a phenomenal novel, but I wouldn’t say that I understand even one percent of it; it’s so unbelievably complex and dense, and extremely clever academics have spent the best part of a century trying to unpick it, without much success! But nevertheless, I think the book shows in a very powerful way the bizarre logic of dreams, metaphors and fantasies; it’s almost like a demonstration of how the unconscious and subconscious minds work, with all these bizarre symbols appearing and disappearing. It’s a flimsy link, admittedly, but with riverrun I was working in a very metaphorical way with a bunch of sounds and symbols that functioned as psychological triggers for me, in a way I couldn’t understand; I guess I chose the name riverrun for the project to try to allude to some of the surrealistic, symbolic atmosphere of James Joyce’s novel. I find that Finnegan’s Wake affects me without me knowing quite how, or why; that’s pretty much the same way I feel about the riverrun material too.

What are your future plans for this ambient incarnation? Is there any way to tour behind this or is it strictly a studio project?
I’m hoping to do a couple of live shows next year actually. I don’t think the riverrun project is a good proposition for touring generally, but I think that a couple of choice shows in nice art galleries (or somewhere similar) would be a very interesting thing to do. I’ve recruited some musicians from my circles who are really keen to get involved, so it’s all looking positive so far… I never thought I’d get chance to do a riverrun show though, to be honest with you! It’s so funny to see riverrun turning into such a promising parallel career to my song work. I never expecting to release this album, and couldn’t even really believe that anyone else would even like it. So it means a lot that people are being so enthusiastic about it. I feel very humbled.

See also review of Pentimento in our Sound Bytes feature.