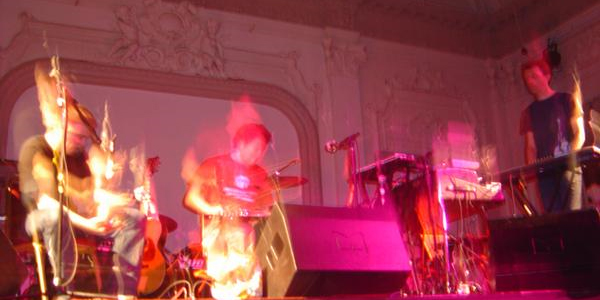 [editors note: answers provided by Daniel Freeman of Rameses III, and spot checked by the rest of the band]

On your website you noted that “I Could Not Love You More” was very hard work, but that you considered it your best album yet, to which I would definitely agree. Can you tell us a little about the recording process?
We generated a lot of material whilst working on this album and it was only on the 20th version that we were all finally happy. Element of some tracks – such as ‘We Shall Never Sing Of Sorrow’ – were actually started several years ago and it was only with this album that we found a way to finish the tracks to our satisfaction. We spent a lot of time just listening to the results before ruthlessly editing out anything that we felt did not work or did not fit the spirit of the album.

There’s a strong sense of nostalgia that’s created with “I Could Not Love You More”. I felt this with your earlier work as well, but it seems particularly strong here. Is this album a more personal work for you guys or am I looking too deep into it?
There has always been an element of nostalgia to our work. Several tracks have been named after or have been about loved ones lost: for example ‘For Elsie (Cheery Blossom Falls)’ off 2004’s ‘Jozepha’ was for my then recently desceased grandmother. However we did make a conscious decision to make the artwork for the new album more personal so it includes photos of Spen’s grandmother Jozepha who passed away last year.

How do you go about composing your songs?
Generally most tracks start with a recording of 1 or all of us playing live which we’ll then edit and process into something less obvious before we start layering other elements on top. The difference with this album was we didn’t just pick the best tracks for the album, instead we often ended up picking the best elements from the best tracks and then created entirely new tracks from those elements. The first 2 tracks are prime examples of this, each being made up of elements of 3 or 4 earlier unused tracks.

And what gear do you use?
Guitars, keyboards, sampler, voice, field recordings, processing, effects.

Who are some of your contemporary influences?
Between us this is a very very long list! But obvious communal touchstones for us would be Stars Of The Lid, Arvo Pärt, Fennesz, Loren Mazzacane Connors.

The term post-rock has been used to describe your music, which made me wonder about your earlier musical projects? Any old hardcore or punk bands in your musical evolution?
Rameses III started in around 1999, originally when Spen and Steve’s previous punk band had ended and Spen was looking to create more open-ended music and so turned to me as we’d had an earlier art-metal project running about 6 years before. Steve then joined about a year later after these initial experiments and our first recordings came out shortly afterwards. I’ve helped record a lot of friends’ music over the years so I’ve had experience with all sorts of genres.

I’ve noticed that many of your live shows have taken place in chapels and churches. I saw Mountains play in a church last year in Toronto and I found it much better suited to their sound rather than in a cramped bar or noisy club. Where would your ideal venue be and why?
Personally I loved playing the Union Chapel in London, UK last year. A beautiful church, great promoters, friendly bands, hot food, we played well, nothing broke and people turned up!

Speaking of live shows, any chance you guys will play some gigs across the pond in 2010?
Very unlikely I’m afraid. We don’t make any money out of Rameses III to speak of and we all have full time jobs. Would be nice to play the US one day though.

I like the band name and am curious to know why you named yourselves after Rameses the Third?
Spencer came up with the name: I think he just liked the sound of it and there are 3 of us so it just seemed to fit.

What’s next for the band in 2010?
First off, we’ve just finished a 3 inch CD for Under The Spire so we’re hoping that will be out by the summer. We’ve done a remix for Aarktica as a thank you for his contribution to ‘I Could Not Love You More’ off the new album. We’re trying to finish off a more folk-based single for Geographic North. And once that’s out of the way we’ll start thinking about the next album.

See also review of I Could Not Love You More