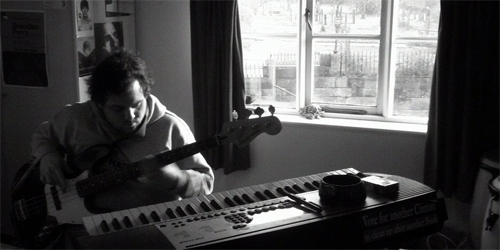 The title of your latest release means, The Sea. Can you tell us why water is featured so heavily as a theme in your work?
The tracks are named after favourite places of mine; places that I like or consider to have an atmosphere. The first album was more land-oriented, and this one, I suppose, is a bit more “by the sea”. It’s a bit of a naff concept really, it’s just the way it worked out… I grew up in the south west of England, which is a kind of peninsula surrounded by the Bristol Channel and the Atlantic Ocean. I didn’t exactly grow up on the beachfront, but going to the sea was a kind of weekly occurrence, and the occasion of many trips and outings. I mean, there’s not a lot to do in the south west of England, especially as a child, so a lot of your “entertainment” consists of driving in the car to go and look at the moors and the scenery and the seaside and so on – in the depths of winter, hahaha. I think a lot of kids would find that really boring but I later came to appreciate the sense of wonder that instilled in me… on these trips I’d have my little walkman with me, listening to Eno or Peter Gabriel or “Tubular Bells” or something, and because of this I made a strong mental connection early on between landscapes, seascapes, and certain types of music. I see landscapes and music as the same thing, in some funny way. I tend to disappear to these places in my head when I’m working on music – I kind of work on autopilot and what I’m actually doing is remembering landscapes and scenery rather than thinking about the music that I’m making. And I find it impossible to construct music without some reference to geographical phenomena – I tend to see my songs as organised like the cross-sections of landscapes as seen in, erm, geography lessons or something like that. So in my band, for example, I’m always using words like “contour”, “plateau”, and so on. Is this even making sense? I get a lot of blank looks when I try to describe this to people…

Tell us about Elly Webb and Five Mile Beach.
Elly is my dearest friend – we have been best friends since we were sixteen or something, we studied together, and we lived together in Devon during our college years and shortly after. She’s originally from Jersey, and I went to stay with her there one summer, after she’d moved back home for a year. This was in 2003. It was a very memorable time and our walk along Five Mile Beach – the most massive beach, it’s literally named! – was a particularly evocative memory that was in my mind whilst writing that track. Jersey is situated between the coasts of England and France; in fact it’s actually much closer to France, so although it’s mainly English-speaking, there’s a massive French influence there as well. The French influence can also be seen in the album’s title and the other track titles like “LaCorbière” and “Val De La Mare”.

Was your production and composition technique any different from Pentimento? What instruments and methods were employed?
The first six or seven tracks on the album were originally intended to be released on their own – there was a label that was interested in putting them out as a mini-album. For those tracks I broadly followed the approach I used on Pentimento, which basically consisted of working with layering various old tape recordings and old experimental pieces, and slowing things down on tape to get some more grainy, warped sounds. And when I was back in Devon at Christmas time I found a mini disc of some old recordings I’d made years ago – recordings of the sea, environmental sounds, things like that – and decided to throw those in as well. I guess I became interested in pushing the environmental-sounds aspect of Pentimento a bit further – normally the only kind of music you hear that has the sound of the sea in the background is terrible, terrible New Age crap, so I had an idea that it would be nice to do something a little bit more credible with real environmental sounds. Then when the plan to release a mini-album fell through, I had the idea to make double album, which would allow me much greater scope to include a wide variety of tracks than I could have fit on a single album – I really had a sense that I was trying to test the boundaries of what the riverrun sound could be, how many things it would include. The tracks like “Atlantic Beach” are, basically, the Pentimento sound pushed as far as it can go, I think. And then there’s ones which are a lot lighter and feature less layering, like the “Doniford Bay Revisited” track or “Jared By The Sea”, which were pretty much recorded live in one take and are very fresh. Then there are tracks like “Dancing Ledge”, which at over 35 minutes is the longest thing I’ve ever made! These structural differences aside, I’d say the compositional process was broadly similar to the first record, although unlike the first record, there was a lot of rather underhand sampling that went into this one – processing and reprocessing things and slowing things down to such extents that the original source is totally lost and degraded. They’ve been messed around with so much that, in one case, even the person who played on the original record couldn’t tell even when I pointed it out. Hahaha.

Which tracks did Graeme Meikle (Modern Painters) and Mark Peters (Engineers) work with you on?
Graeme and I jammed the tracks that would become “Jared By The Sea” and “Little Sea” one day last November. We’ve lived together since 2003 or so, so it’s quite easy to just plug in and make stuff on a kind of casual basis. The tracks that I did with Graeme happened when we were just messing around with some guitars and synths – we were actually writing stuff for the forthcoming Painters album, but got a bit distracted. Quite often in situations like that, I’ll just keep the recorder running, and some of the droning, warming-up things we do wouldn’t work for the Painters, but with some mixing and slowing down they can end up being used as riverrun pieces. As for Mark, he gave me some really beautifully recorded bell and vibraphone samples that I made into loops which ran throughout some of the pieces – we didn’t sit down and play together, but those loops added a lot of character to the pieces, so I felt that some credit was necessary.

Are those the bell samples at the beginning of La Corbiere?
I think those are from something else actually, but the vibe samples are definitely on “Jared By The Sea”.

There are so many places touched on: La Corbiere, Donford Bay, and Hollow Ponds. Can you describe their impact on you?
I think it goes back to the thing that I touched on earlier – these locations are places that I mentally escape to during the writing process, in a funny way. They’re touchstones of a sort, in the sense that I’m trying to capture something of the ambience of the place by writing a piece of music about it. I suppose an important point to add is that there’s a certain amount of nostalgia involved – these are all places associated with my childhood or adolescence, places that I haven’t been able to visit much, if at all, since I moved away to the city ten years or so ago. It’s nice to visit these places again, if only mentally – and in fact, these places and the memories associated with them are slightly changed, improved and made more poignant by the fact that I don’t have daily experience of them. I suppose this way of thinking about memory and the improving-effect of nostaligia is something familiar to anyone who’s read any Milan Kundera… or even just Brian Eno’s sleeve notes for “On Land” – an album which is always a big inspiration on riverrun!

You are incredibly prolific. Have you already started work on your third riverrun project, or will you focus on the Modern Painters in the second half of 2011?
Well, The Modern Painters is really the central focus of my musical life, and getting our second album finished, mixed, released and promoted is probably going to be the biggest thing I’ve ever been involved in, purely because this time round we’ve actually got a label involved. That’s going to eat up a lot of my time and energy, but the good thing about the riverrun stuff is that’s is pretty easy to make – you know, compared to making a “band” album with drums and string sections and backing vocal choirs and so on! – so it’s something I can make at home, privately, whenever I have a moment or a laptop or whatever. And it’s good crop rotation for me – whenever I get bored or run out of ideas with one type of music, there’s something totally different I can immediately turn my attention to and get results pretty quickly. So there’ll definitely be a new riverrun album at some point next year and maybe even two. A good label has approached me with regard to signing riverrun up for a release, so that means the next album will be on a”proper” label, which is all very positive and looking very hopeful. I’m not sure exactly what the next album will be like; I imagine there’ll be a certain amount of continuity. I also have a collection of “ambient piano” pieces, none of which have been released yet, so that’ll be out next year as well, probably under my own name. And at the same time I’m putting together a live band for riverrun concerts featuring some really interesting people, including Bing Satellites, who has his own ambient label, radio, and musical projects. So it’s all very exciting. I think however it pans out, 2012 is going to be a pretty busy year for me!