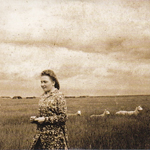 After a string of releases and collaborations on various labels over the last few years, London based trio Rameses III released I Could Not Love You More on the always intriguing Type imprint in the fall of last year. It is a soothing and pastoral album full of lush drones and ambient soundscapes. Combining acoustic guitar, lap steel, loops, voice, synths, and field recordings of idyllic summer days, Daniel Freeman, Spencer Grady and Stephen Lewis, have composed a relaxing and intimate album reminiscent of Brian Eno, Helios, Mountains, and Klimek.

Like all good ambient and modern classical, there’s a sense of weightlessness to Rameses III’s music, yet there’s still an inherent feeling that a band is playing this music — it’s not overly produced, it’s soft and very organic. Tracks like “All Shall Be Well” and “Cloud Kings” play up the trio’s love for sprawling drone, while tracks “Across The Lake Is Where My Heart Shines” and “No Water, No Moon” are more song-like in composition, where the instruments maintain their sonic shape, rather than morphing into a whir of sound.

The album conjures up a sense of nostalgia that I cannot quite put my finger on. Listening to it makes me feel a closeness to the past, a nearness, a uniformity even, to a forgotten yearning from years before. The beach side samples in “No Water, No Moon” reminding me of summers come and gone — the soft strum of guitar creating a wall of white nostalgia, visceral feedback reverberating in my ears — as the band’s use of haunting vocals brings me back to the surface of my present, and I realize I’ve just totally zoned out on the streetcar and missed my stop completely. Such is the beauty of music, and such is the aural allure of Rameses III’s I Could Not Love You More, which ranks as one of the best ambient, modern classical albums of 2009. Check it.

See also Two and a Half Questions with Rameses III