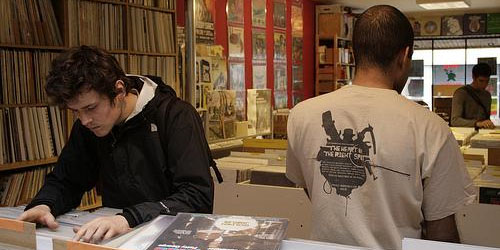 Tell us about your upcoming live track on Project: Mooncircle compilation, Silent In Truth.
It’s actually something new we wanted to try out: finding a way to incorporate live instruments in our beats. We decided to do a little jam in “the lunar bar” over here in Antwerp. We asked some friends of ours who play instruments to come over. After the sessions we mixed everything in the studio. One of the tracks that came out of that jam session will come out on the next Project Mooncircle compilation.

Can you recall one of those exhilarating experiences during record digging, when you found that one riff, or one beat, that put a huge smile on your face?
Not much during record digging. It’s mostly when I come home from the record store and have a good listen to the records again. That’s when I realize what kind of treasures I’ve found. It’s always nice to go digging in other countries. Last year I was in Cuba. I met this old lady who wanted me to have her record collection. I had to travel around with 20 kilos of records in my backpack for the rest of my trip in Cuba, but it was worth it!

How did the underground world of mix tapes contributed towards your success in getting signed to a label?
I don’t think the tapes we made had any effect on labels. Mix tapes are a local thing. We only made 100 tapes of ‘Hit The Hay’.

What is the Hip-Hop scene like in Belgium?
Belgium is a small country, so it’s a small scene. We have a french speaking side and a Flemish speaking side. The two sides have a scene on their own so that makes it even smaller, haha. But that doesn’t matter, there’s a lot going on.