Let’s start at the very beginning. Can you tell us how you got involved in composing, and what was your very first piece of gear?
At the very beginning, my mum used to play the piano with me on her lap as a baby. We got really into The Snowman, which became one of my favourite films and still brings me to tears. At primary school, we had a ‘choose an instrument day’ and I chose clarinet. I learned that and piano Kodaly method with a lovely teacher called Meredith. That was rhythm-centric which I used to tap out on the table with Dad. So school, orchestras and music exams aside after difficult teenage years, dad brought me a demo tape from a composer for one of his film pitches and I played it, learned it and then started playing with it. I became obsessed with making these themes on the piano from this one fragment of material and I was given an old mini tape recorder that my mum used to use for dictating at work, to start recording ideas. I had experience in notation and theory from school and at the time, my music teacher gave me some CDs of minimalist artists, noticing my interest. I think it went from there.

How many different studio iterations have you gone through, and what does your final setup look like right now?
Quite a lot! I have moved through different homes, tables, desks… For a while, I had my grandma’s painting table as I was in her old art studio but just downscaled to a smaller surface as I was reaching over a lot. I definitely like to switch things around at least once a year and you end up making do with what you have. I’m happy to finally have a piano in the studio now, but equally happy to travel to other spaces, like my friend Bob’s where the Philicorda lives or to my parent’s house to use the Pleyel or Yamaha pianos. 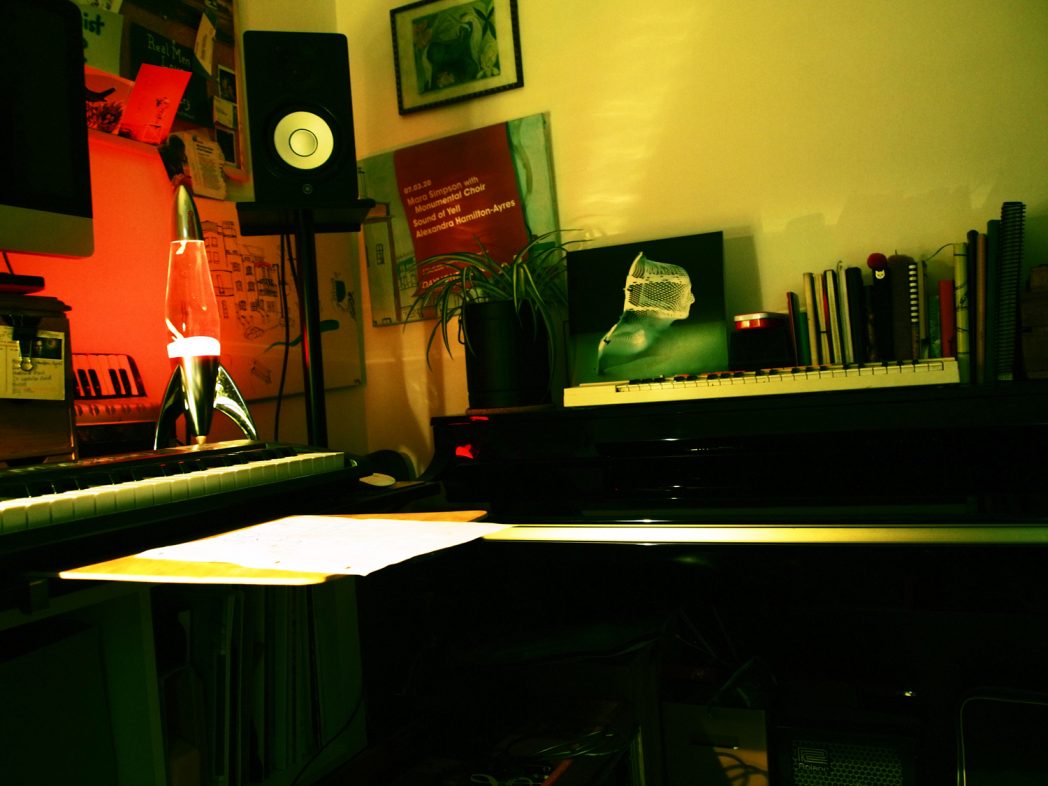 Tell us about your favourite piece of hardware.
I don’t really have a single piece of hardware that I love but many things. I was given a Philicorda electronic organ by another Bristol composer Matty Loveridge whose grandpa it belonged to. It lives at my friend Bob’s house who is a real support, so not part of my studio as such, but an extended part of the setup. It has such pure deep bass sounds and has a really nostalgic feel to it. We also got excited about the spring reverb and I used it on Overflow on ‘2 Years Stranger’ plus on film scores. I also recently restored my Grandma’s old Decca radio and tape player which I have used to record piano on tape. It was a really fun restoration project a bit like the organ and I am playing with it a lot more on my new work.

And what about the software that you use for production?
For film work, I mainly use Logic and on stage Ableton. I used to use Reaktor on stage but it was actually far more complicated than I needed. I do like using it for film work still or as a plug-in in Logic. 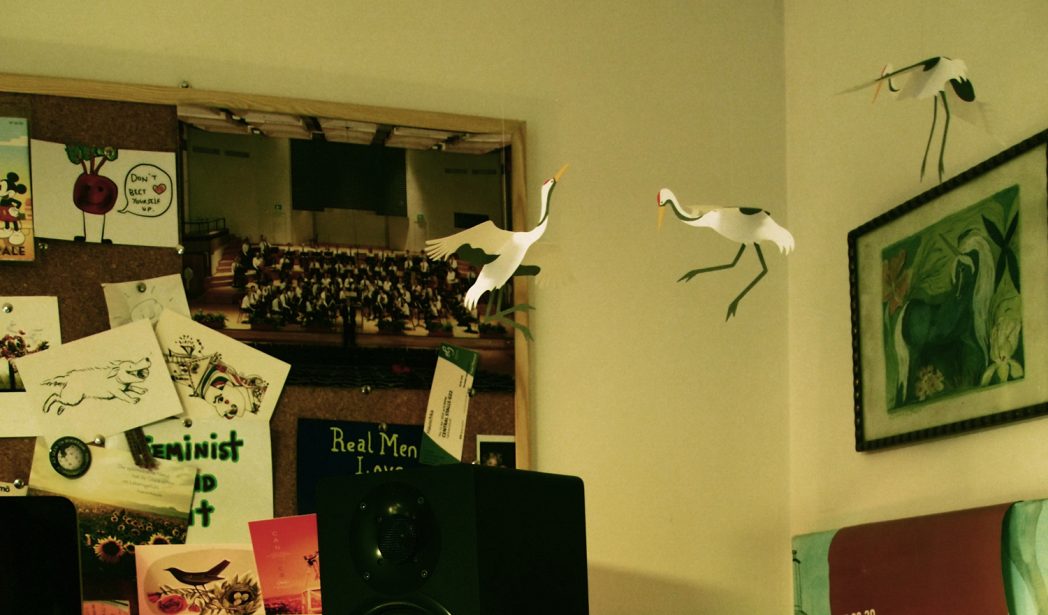 Is there a particular piece of gear that you’re just dying to get your hands on and do you think one day you’ll have it?
I am not really a ‘gear head’ as such. I just get really into instruments in phases and feel thankful for whatever I have access to. I guess I would love to have a full-size harp one day and noodle with it which is a crazy dream. I had this idea that I wanted to try and learn every instrument once to see if there was something I was secretly really good at that I didn’t know about. I recently borrowed a Minimoog off my parent’s lovely piano tuner and I guess that got me a bit more into hardware synths. I loved the freedom otherwise of being able to make my own dream instruments in Reaktor and don’t fancy growing a massively complicated setup, even though I am sure I would be really excited if I had a room full of synths.

Can you please share some aspects of sound design in your work?
I am interested in textures in music and everyday life and how they blend together, perhaps coming from general hypersensitivity. When I hear something that inspires me, I record it and play with it. Finding sounds is like looking through a jumble sale and finding something that really catches your senses until you become slightly obsessed with it. A bit like the trains in 19-88 EP or the sounds in the hospitals that then became musical themes in ‘Coma’ or ‘tears’ in Overflow. I think that real sounds from everyday life give music much more of a reality and even, I guess, a cinematic quality. There is sound mixed into music in film, a door closing at the end of a phrase, ambient noise, so I am interested in how that can feature in music releases to conjure up visuals. 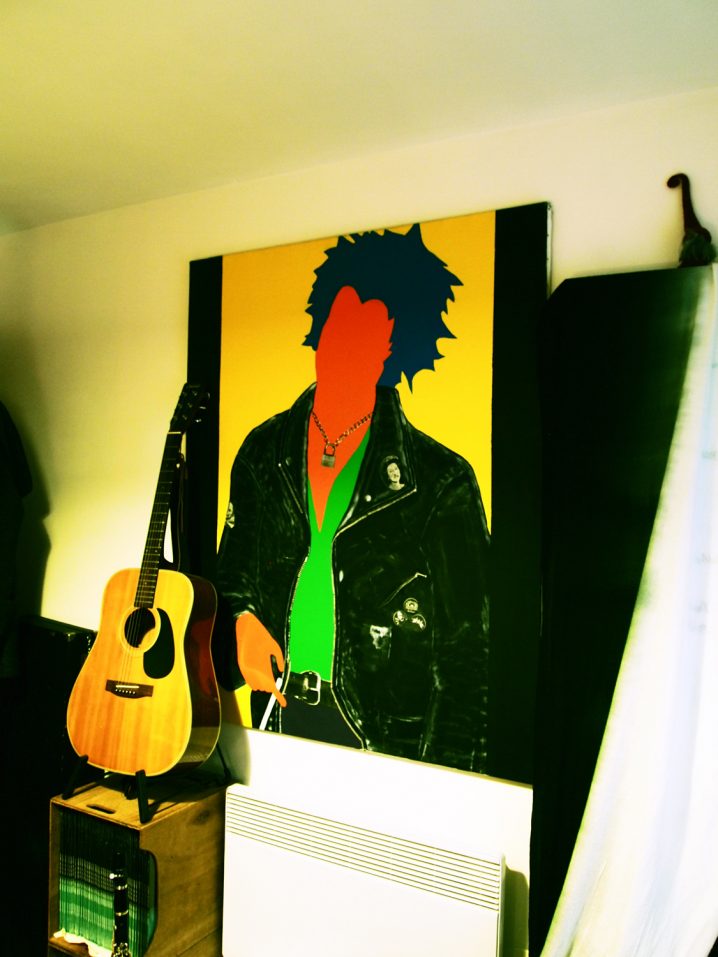 Any particular new techniques that you tried out for your new album?
This was the first time I worked with a lot of fragmented piano recordings and almost reworked them into an album. So it was like I had done all of the research and had the elements to make an album and explored how the material could be used and processed. There was a lot more experimentation with how the piano can sound too. I really played with processing it, through the tape, through different samplers and just seeing what came out and creating more intricate layers than in ‘19-88’. I was keen to develop that side of piano exploration further. I am aware there are loads of artists who work with piano in the new classical genre so I also really wanted to explore how I could carve my own sound a bit more. I also re-recorded the piano from lots of different angles. Sometimes from the other side of the room with the window open for different textures and traffic noises to feed in. It isn’t something you would notice on first listen but I think it adds an extra something to the music that warms it for me. There were also fragmented vocalisations that I decided to granulate and warp. I wanted to explore how these vocal textures could make the tracks more human even in being super-processed to sound more like instruments and synths.

What is the most important environmental aspect of your current workspace and what would be a particular element that you would improve on?
For me it has to be somewhere I want to spend hours. Having lots of nostalgic things on the walls and sides that trigger emotions is really important to me. Even old journals from certain times in my life, letters from friends and people now gone from my life. I like writing things down a lot, so I also have a giant mirror given to me by cellist Juliet McCarthy that I use as a whiteboard to write down ideas with big pens. This idea was a recommendation from a film composer friend Daisy and it really harnesses my inner artist. I have a lot of my own paintings on the wall. This year’s zoom favourite has been Sid who was a school art project on pop iconography. I would love a bigger space one day out of the city with a full-size piano in, but I absolutely adore my little studio and I am ever grateful for what I have. 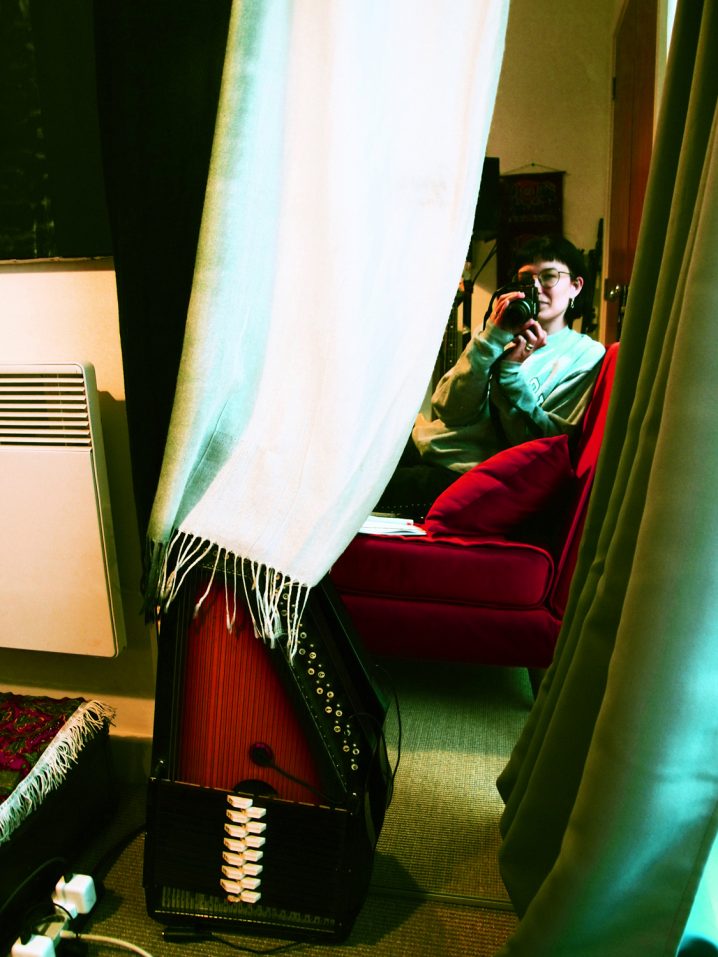 What can you tell us about your overall process of composition? How are the ideas born, where do they mature, and when do they finally see the light?
It’s a little obsessive in nature. I spend a lot of time thinking about ideas, in fact, most of my time there is always something in the back of my head. I guess film work has given me a quick response process too, but with my own work, I love that I can take the time to develop ideas more slowly. There are always ideas lingering and if I come up with an idea, I like to leave it and then come back to it the next day and if it doesn’t come naturally again then it gets forgotten. It’s not a very conscious process from start to finish and sometimes it takes someone else to say “it needs to go up here” or something like that. I love to ask friends for opinions because even if I disagree with them it helps me define the direction.

After the piece is complete, how do you audition the results? What are your reactions to hearing your music in a different context, setting, or a sound system?
It’s a very strange process. It’s like a track you know really well but go through a separation process as it becomes another entity that is no longer part of you. I normally give things space and then come to terms with them being mine again. I don’t tend to analyse things once they are finished, but I don’t think the thrill of hearing your music loud in a cinema or on stage with dance and seeing an audience getting really into it will ever disappear. The album triggered really strong emotional responses every time I listened until it was released and I shared it with more people. Then it got easier to hear again. 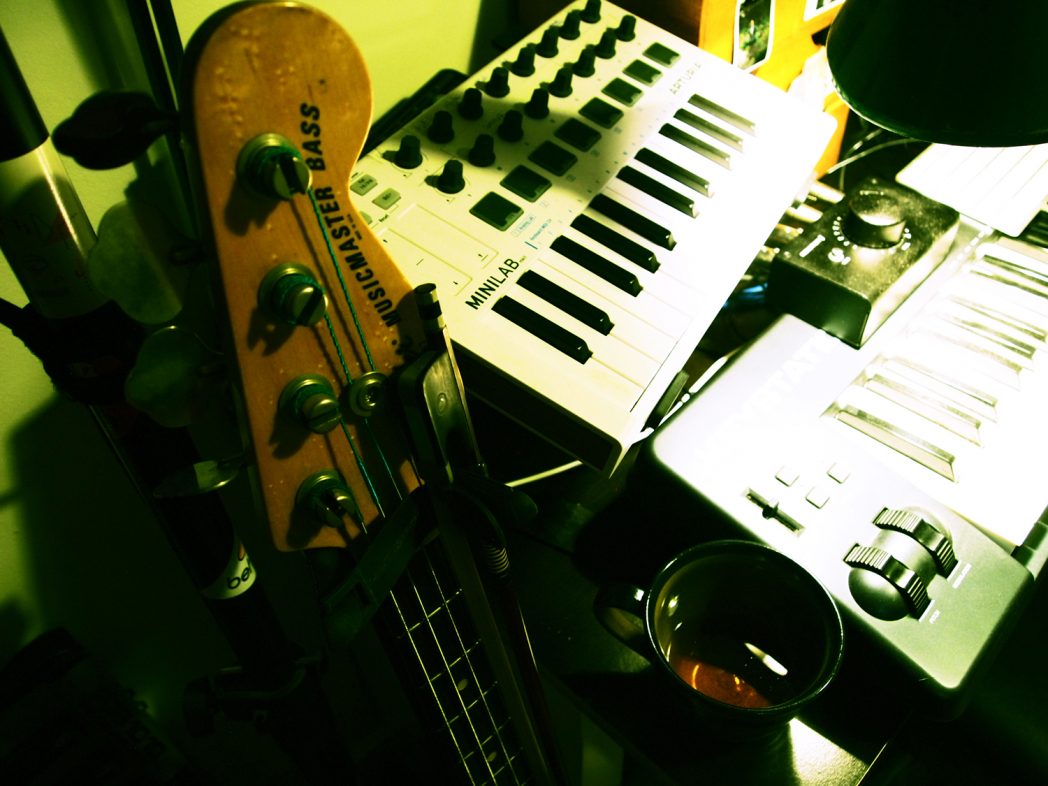 Do you ever procrastinate? If so, what do you usually find yourself doing during those times?
I like to think of it more as thinking time as it’s never really wasting time. I end up either cooking, eating or doing something that is seemingly more urgent (usually more exciting) at the time. It’s amazing what your brain convinces you to do when you don’t feel like actively composing.

What gets you inspired?
All sorts of things, but it tends to be things that trigger emotional responses, that can be anything from a thought, theory or sound. I love watching new films and listening to new music. Hearing amazing things that other people create always fills me with energy and especially stories. 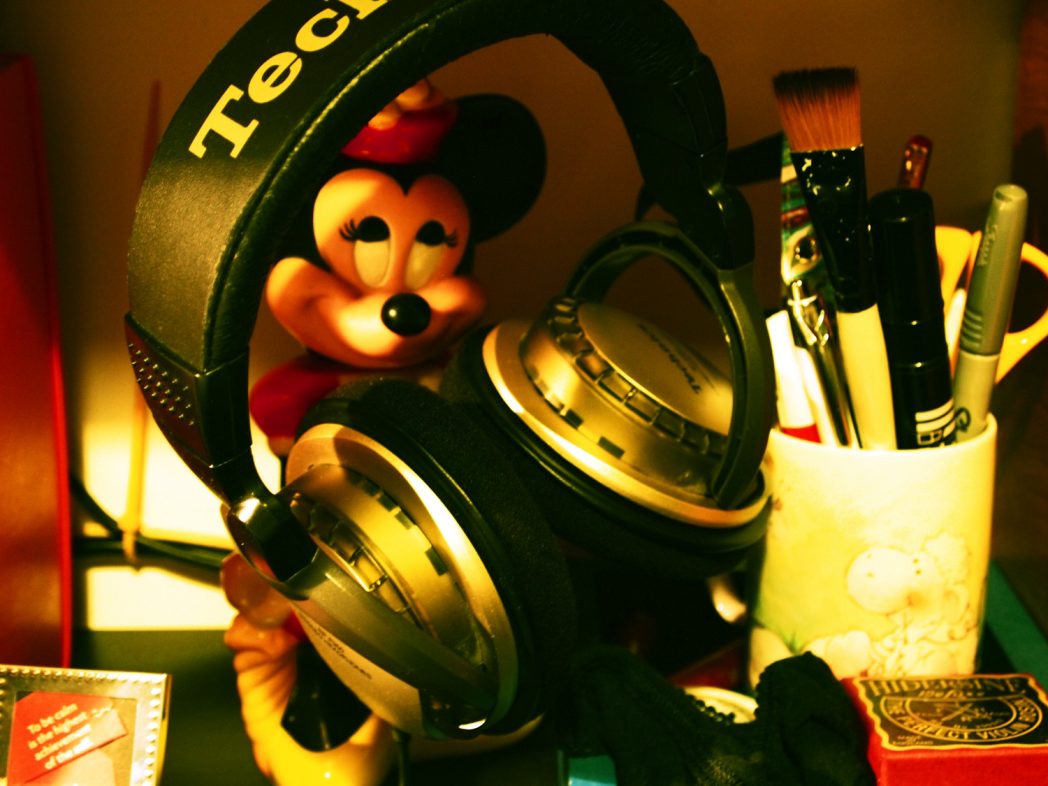 And finally, what are your thoughts on the state of “electronic music” today?
I’m actually honoured you are even asking me this question because I think there is growing respect for classically trained artists treading into electronic territory. I think there are some really interesting styles coming out of so many genres and I love that electronic music is blossoming into many different directions. There is some stunning new music on the scene and writing this right now is making me want to make more music.