I was a little late on the music-making tip. I was the last chair trumpet in a band. I remember in 6th grade, after a holiday break, we were to take a test where each student played a solo we were supposed to learn over the break. I was told I was the only person that didn’t take their instrument home, so I was told to go first, haha. After a few notes, the teacher stopped me and told me to move down a chair, then proceeded to say a few things about how that chair was better than me. I never really cared much for trumpet anyway, but I kept on going. Sadly I don’t have a story here where I got any better. You’re young, cute girls played in the flute section, and that was that.

As for composing, I started in the 90s with a Yamaha DJX keyboard best piece of gear on the market jk. I’m just some Polish teen listening to a mash of trance, techno, and happy hardcore. I don’t know anything about anything. In maybe 2000, I got into fruity loops and switched to Reason in 2002. I was not good. I still have the 2002 Reason files. That DJX Keyboard I traded with cash (obviously) for Numark Pro TT-1’s, and I never got a piece of gear for many years because of those.

How many different studio iterations have you gone through, and what does your final setup look like right now?
I have a very small setup since I live in Reason. Loyal (2012) was made mainly on Ableton but a few parts on Reason. I’m comfortable with the cassette players that I record onto, a handful of guitar pedals (Moogerfooger MF-104M and a few Boss pedals) which aren’t pictured, and Minilogue that lent to Beacon, but I just got a new one thanks to Aaron David Ross (Gatekeeper, OPN) who I think used it on Uncut Gems.

Tell us about your favorite piece of hardware.
Honestly, I love pad sounds. That’s where my head goes first if I’m starting from scratch. The Korg Minilogue is it. I’m surprised by its price tag. I flat out just enjoy the sounds that are on it. For me, I don’t need much more than that. 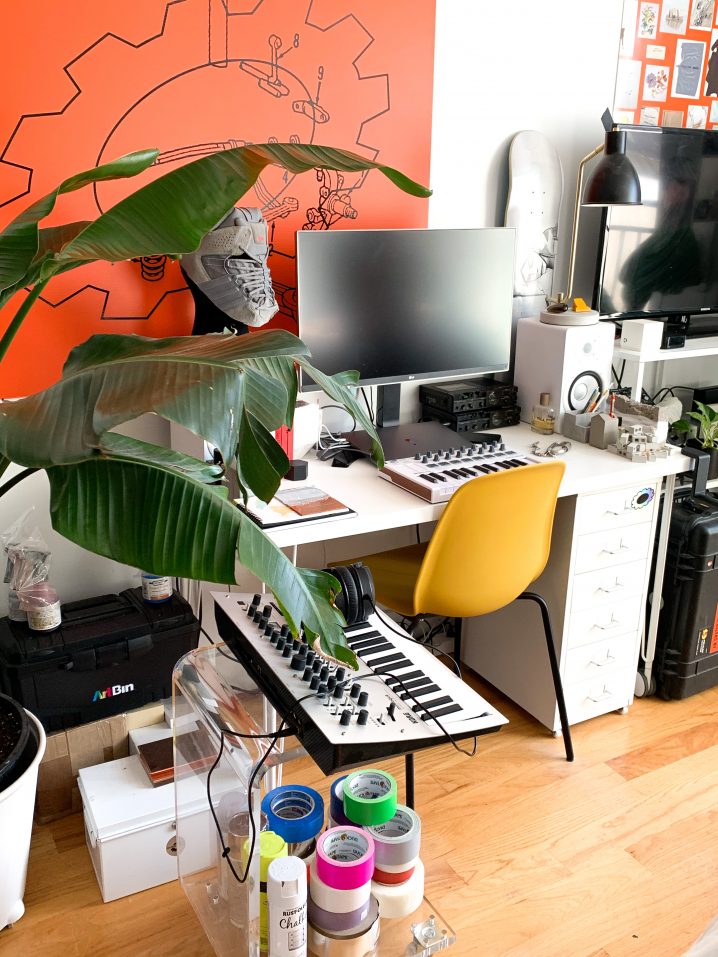 And what about the software that you use for production?
Reason, by a good distance. Sure I sometimes wish I was a Logic man or an Ableton boy, but I’m sticking to what I know.

Is there a particular piece of gear that you’re just dying to get your hands on, and do you think one day you’ll have it?
A Strymon Big Sky & Eventide Space are on deck, I used guitar pedals during DJ sets years ago, and I’d love to bring those into the mix in the studio.

Can you please share some aspects of sound design in your work?
I enjoy controlling noise to a point that it’s always in my music and attractive. I’ve said for years I’m not a noise musician or even an ambient one, definitely not a techno one. I’m just sitting in this hypnotic realm of melodic looped music. That’s the sort of my playing field when it comes to sound design. Where that hurts me, though, is sequencing out sections to create a song structure people might want to hear. 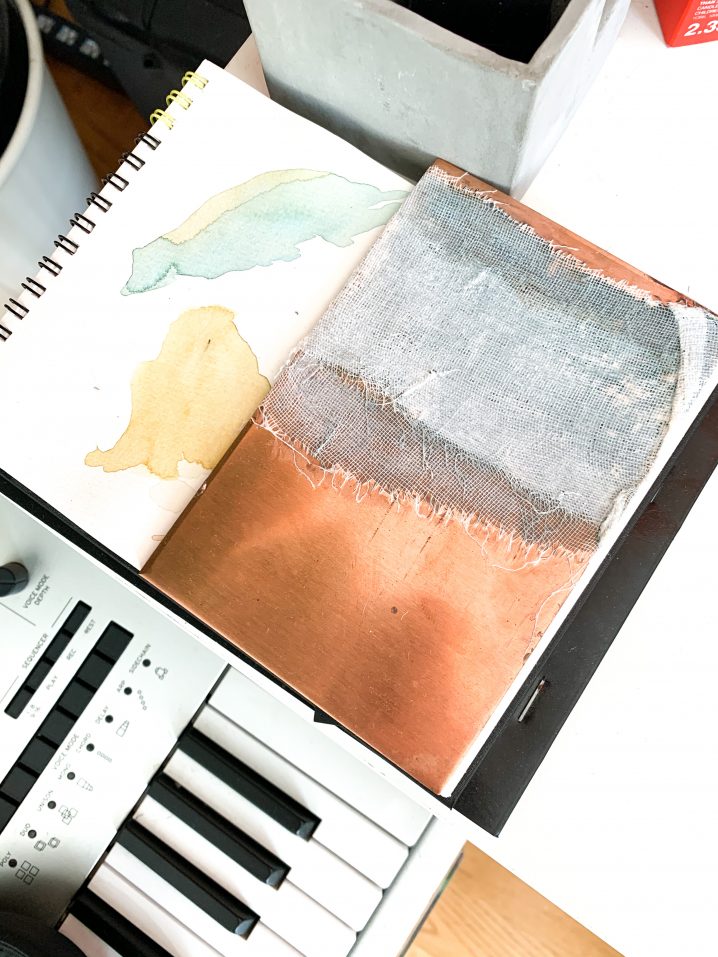 Any particular new techniques that you tried out for your new album?
Yes, putting traditional instruments and spoken word onto my album front-facing, a hell of a creative idea, huh. I’m happy I did. It kept making music feel like artwork again in a language most people might not skip over.

Since we’re talking about new techniques, can you talk about the hand made process of designing the album cover?
A bit about the artwork, it is all physical pieces, no photoshop even down to the shadows, which are manipulated natural light in the studio. Here are the 4 pieces. 3 are the single covers for Basic Needs, Salvaged Copper, and Missing Highs. 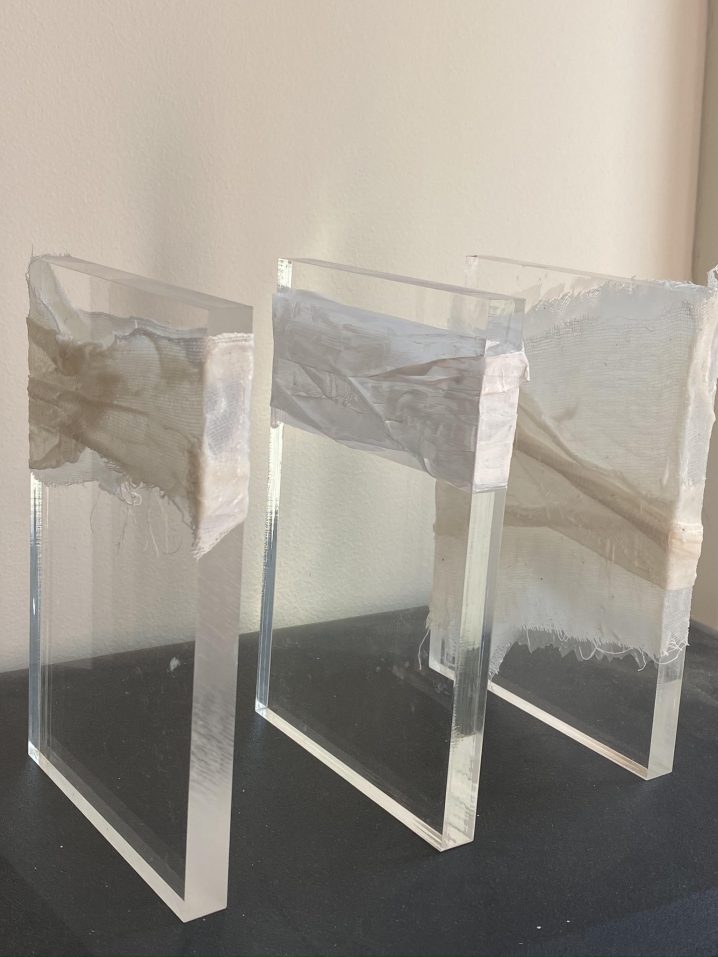 The concept was having all 3 singles as in-process / work area captures of other ideas that could have been the album cover. Most of the time, I’m more interested in the process than seeing some polished finished piece of work, same with my album cover Loyal. It’s the palette & photo that’s the cover and not the painting of the photo. 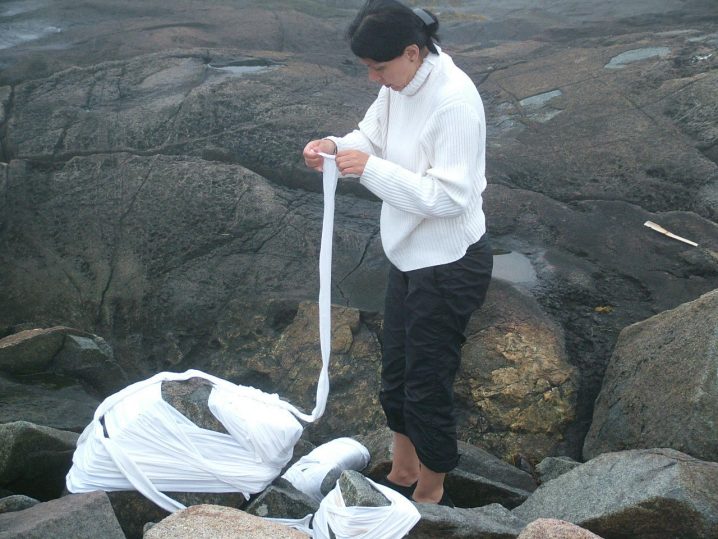 The final Cast piece is copper that has gone thru a patina process, which is a mixture of a few chemicals I’ve put together. The gauze is a rework of a project my mum worked on 15 years ago that I loved and pushed her to revisit. She would wrap heavy stones in gauze in the same technique she learned to wrap people’s limbs for injuries representing healing and self-care. I asked her to do Plexi for my cover so you could see-thru to the copper. The Plexi / Gauze pieces also vary in size (larger scale) and are their own pieces as well that I’m finishing with her. 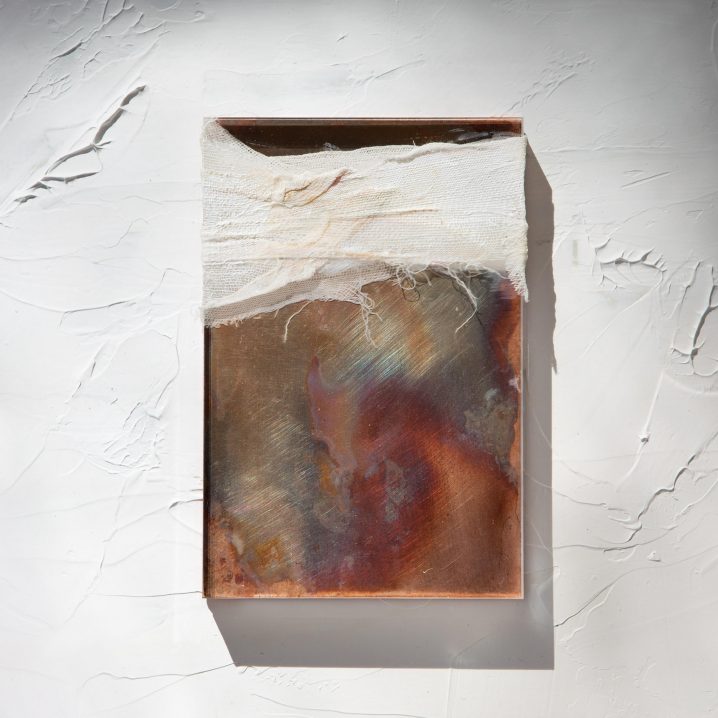 What does your live setup look like, and what do you bring with you when you travel for an extensive tour?
I actually don’t have one at the moment. In 2013-2017, I used to have every song on a different cassette, 2 tape players, a mixer, and it all ran through guitar pedals. I would put raw recordings of my songs, muting all effects, and re-effect the cassettes live. I’d also have 2 women on stage helping to distract the crowd by making mundane gestures like reading a book, pouring sand in vases, or painting flowers as a distraction but also to engage with the crowd. The lights were on, usually bright pink, and no laptop. I just went to too many boring ambient live shows that no effort was put in, so I had to not do it when it came to me “performing.”

And what do you have to say about the concept of “anti-performance”?
The stigma of amateur to professional performance, especially from on-stage or even from the educational theatre side, has this theme that I can’t relate to. I do enjoy noise/punk shows, and that’s performance, but I don’t make music like that. I don’t feel like I fit in with gearhead musicians either that sit on stage with a mass of instruments by themselves and don’t engage with the crowd. So, mainly on Cast, it’s just my way of saying, hey, there’s Spoken Word here, but it’s not a poetry slam or me being expressive to be intellectual just to be intellectual. It’s casual over here in Heathered Pearls land. 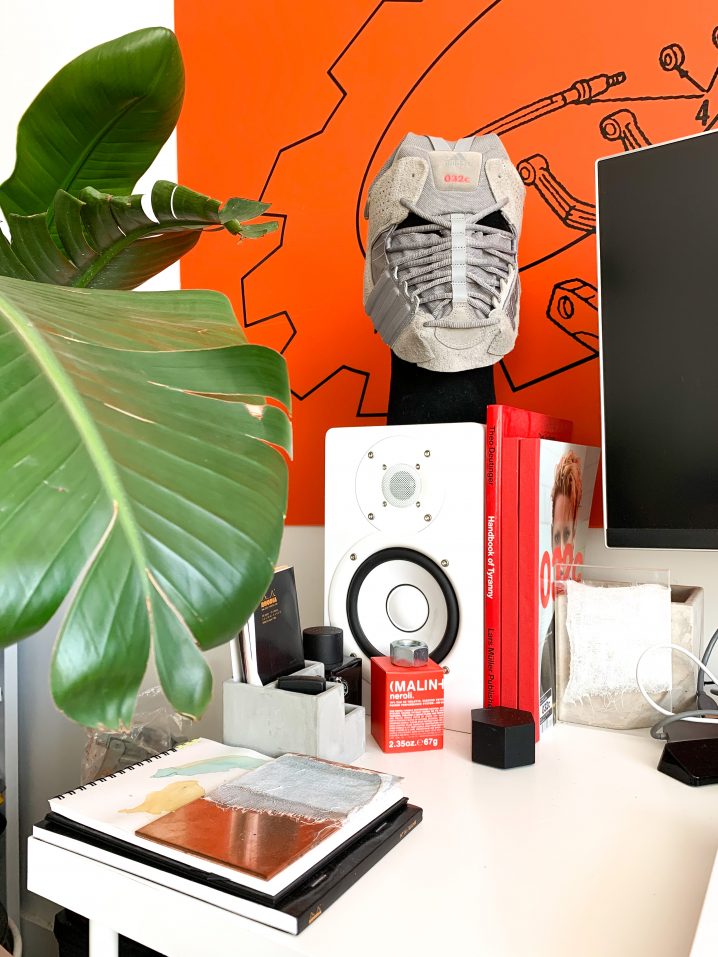 What is the most important environmental aspect of your current workspace, and what would be a particular element that you would improve on?
I have plants, some that you can’t see in the shot. I just want to be sitting in an indoor jungle. Outside of that, I’d love to have a better way of importing sounds. I don’t sample at all, I did on Loyal (2012), but it’s all from scratch.

What can you tell us about your overall process of composition? How are the ideas born, where do they mature, and when do they finally see the light?
I think some of the sounds I make happen within the hour I start. I usually crop myself into a 4 bar loop and maximize what the song will be at its apex, and deconstruct later. That way, I know if the song is worth finishing.

After the piece is complete, how do you audition the results? What are your reactions to hearing your music in a different context, setting, or sound system?
Definitely not a sound system. I think sometimes I look at my dog’s reaction to see if he fell asleep, or at times I don’t audition them all until I have the concept together. They can be rough and very loose and just loops, and I’ll just share them with close friends without any shame. 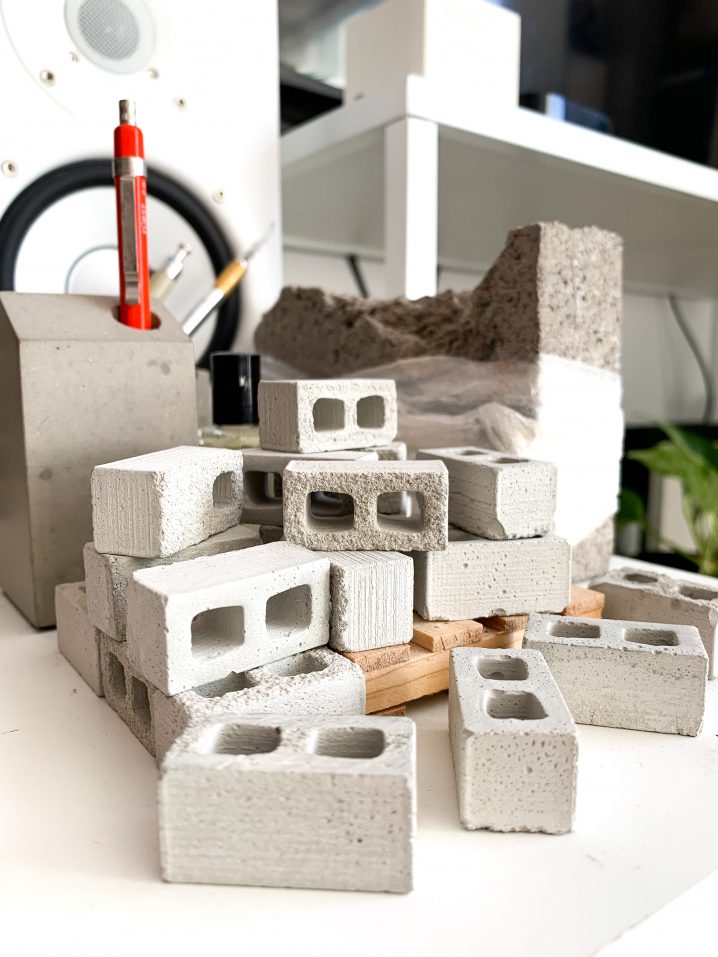 Do you ever procrastinate? If so, what do you usually find yourself doing during those times?
Oh, this record is 4 years old. I have procrastinated by getting into relationships that I didn’t make any music at all. I started playing online videogames with different friend groups. But the best has been making physical artwork pieces.

What gets you inspired?
To finish? Lately, it’s been just to push me to make something that can stand out and will not fall out of trend. Knowing that’s doable and I can just jump out of bed and attempt it gets me really going.

And finally, what are your thoughts on the state of “electronic music” today?
Gutted, with shows not happening, the energy just feels like it’s being vacuumed away. Techno to Ambient, I need it to be something I can visit with others, I do love my headphone sessions with my favorite consistently updating playlists, but there’s a lot less to feed off of right now. 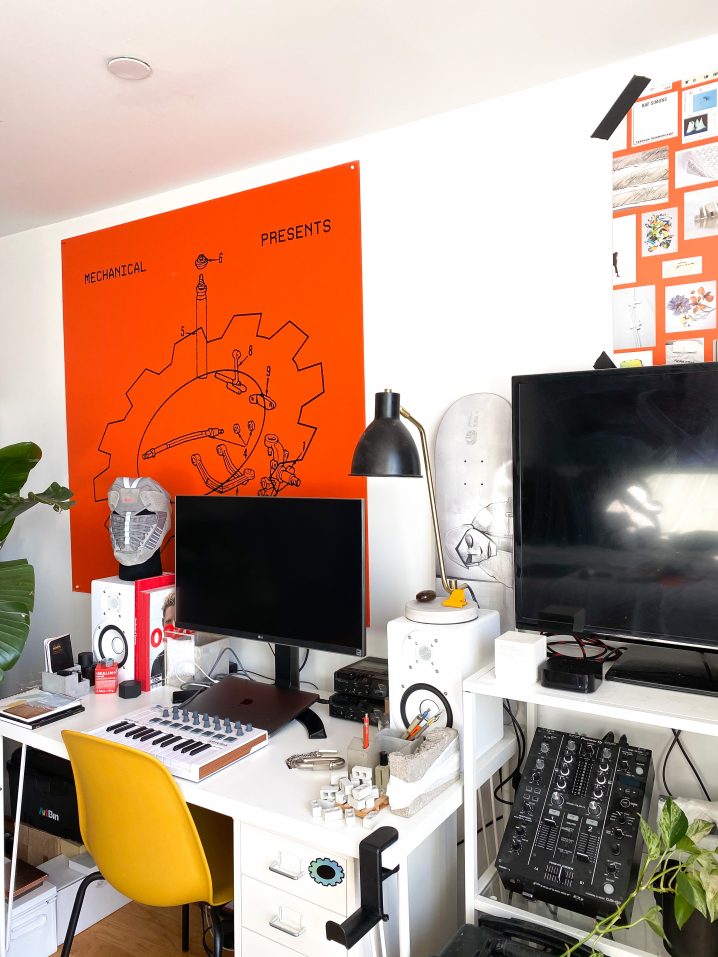