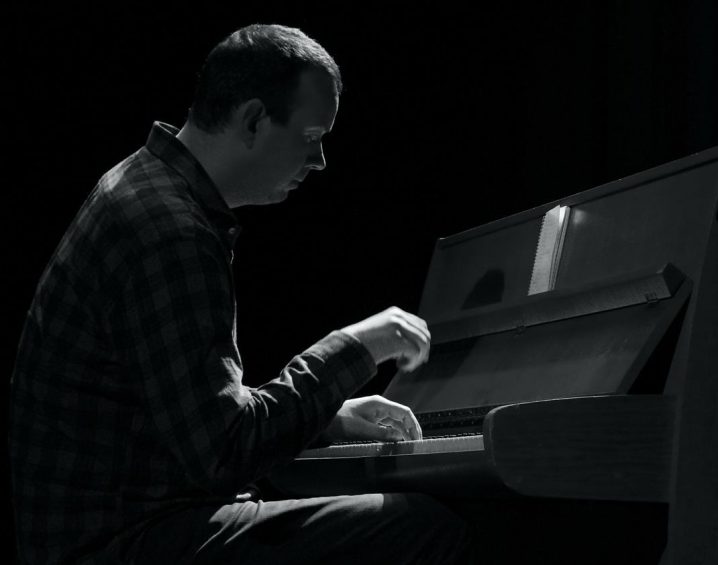 How were you introduced to music? When did you start creating your own?

I’ve always felt a natural pull towards creating music since I was very young. I wasn’t immediately drawn to the piano – I started making music with computers and music software. It started with “trackers”, where you plot in the music note by note. Later I moved on to sequencers and MIDI keyboards – and that is where I started learning to play the keys.

I learned a lot from this. Recording bass-lines, drums, string chords and so on via MIDI to build my compositions. I tried piano lessons just a couple of times, but that really wasn’t anything for me – I wanted to explore the instrument on my own terms. It’s a slower process for sure, but I believe I developed my own characteristic going that path. The transition from working with computers, synths, and sequencers to focusing more and more on the piano, has happened gradually over the years. These days, I mainly just play the piano.

You’ve previously explained how you have different approaches to composing, could you elaborate on that for me?

It is very hard for me to explain how a new composition is born because it is very coincidental, different and almost never planned. When I sit down to play the piano, I never have any intention other than “I feel like playing the piano right now”. Sometimes I’m in “rehearsal mode” and other times I’m in “exploration mode”. Honestly, from there, things arise. Some pieces are formed as part of an improvisation, others from a specific new playing technique I try out or a set of chords I like. But then suddenly I get obsessed with a new idea or melody, and that often ends up being a new composition.

As an example: On ‘the Lost’, one of the compositions I spent a lot of time on is ‘Greiner’. I already had the melody I play with my right hand; I don’t remember when I first made that because it came to me effortlessly. I decided that I wanted to create a melody for my left hand that complimented it, and that was the hard part. I built it note by note, spending many days working on it. Then I spent equally long learning to play them together. ‘Greiner’ was hard work to compose and to learn to play – other compositions like ‘Fox’ came suddenly and effortlessly.

Has this approach changed over time?

My approach hasn’t changed, though I did learn a lot making ‘Pinô’, and that experience made me more determined and focused composing and preparing for ‘the Lost’. As a result, there isn’t as much improvised material on ‘the Lost’. That may be the main difference between the two.

What or who is your biggest inspiration when composing? Do you do anything, in particular, to get in the right mood for composing?

I don’t have any particular routine. It’s like working out at the gym. You go in feeling tired and not in the mood for training; but when you start, you are surprised at the amount of energy you have that day – and vice versa. It’s this weird unpredictable thing. I have days I feel down and depressed, but then wonderful things happen playing the piano. Then I have periods where I’m very productive and periods where I can’t create anything. But one thing I’m sure of, it really motivates me to have a goal. As of right now, I don’t have any plans on doing a third piano album, so I’m not as productive.

What can you tell me about The Lost?

The feedback I received after releasing ‘Pinô’ was so incredibly warm and loving. People understood and felt exactly what I wanted to express. I felt connected to them and their appreciation was so authentic.

After Pinô’s release, I didn’t plan on doing a follow-up. But when Nils told me he was willing to do another album with me, I knew I wanted that to happen as well. I spent the next one and a half years composing and preparing for the recording of ‘the Lost’. I didn’t want it to be just more of the same, but still similar to ‘Pinô’. We used three days recording and three days mixing and mastering ‘Pinô’. ‘the Lost’ was recorded in two days and mixed and mastered in one; half the time. I was better prepared this time, though. Still, it’s such an emotional experience. I didn’t touch a piano for weeks after that… it’s strange. I came out of it very satisfied but also completely creatively drained. I do believe other artists have similar experiences as me, when creating an album.

Were there any other differences to creating The Lost as opposed to Pinô?

The process of creating them was very similar. Both were made with Nils Frahm as the producer in his Durton Studio (now moved to Funkhaus, Studio 3) in Berlin. Going in recording ‘Pinô’, I wasn’t prepared for what an emotional experience it would be. How different it is playing for an actual recording, compared to sitting alone at home playing the same piece. I had a more determined attitude the second time. ‘The Lost’ was played on a different piano and with different recording equipment. The process was exactly the same as well as releasing it on Monique’s Sonic Pieces. It’s a true follow-up in every way.