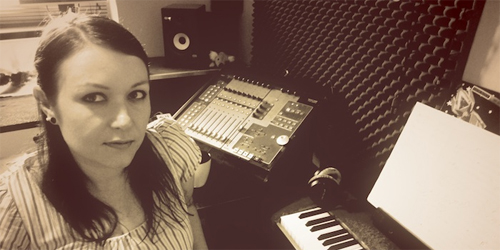 You’ve been composing for a while… what finally triggered the decision to produce a solo album?
I remember feeling very inspired by some ‘concept albums’ I saw coming out of the contemporary classical channels – Nico Muhly’s Mothertongue, Terry Riley/Kronos Quartet’s Cusp of Magic, Fitkinwall’s Still Warm in particular. I love the idea of using the studio as a kind of expressive instrument in it’s own right, and working with timbre, texture, sound combinations, proximities and space to communicate ideas and feelings. The more I thought about it, the more I quite fancied making one: something autobiographical and personal, a concept that could make use of and celebrate all of those ‘other’ sounds that live around the notes.

What is it like getting a PhD in Music Composition? Can you tell us about that?
It’s great! It gives me a nice excuse to spend time experimenting and trying out new ideas. I get to indulge myself and think at length about my own creativity. I’m not even sure if I want to use the thing to get an academic job in the future, I took it on as a personal commitment to self-development. It’s practice-led research; the way it works is I make a lot of music, basically, and through those processes develop and understand my creative methodology. The dissertation then frames my experiences as knowledge that other people can use. My work looks at the evolving role of the composer/producer, and examines some of the unique creative opportunities presented to us by technology.

What are some of the most exciting aspects in your research of music and technology
I’m most excited about the idea of ‘recycling’ my music, squeezing the most out of my work and playing with the assets of my creations. It sounds a bit wanky, but let me try to explain… The journey of a composition through different stages – from, say, captured MIDI improvisation to score to sight-reading and rehearsal to performance to recording/mixing to remixing – and looking at the whole life of a work, capturing it at different stages, using those captures to form new works or fresh evolutions of the old. Technology facilitates these opportunities, from MIDI capture within sequencing software to mobile recording setups using interfaces and devices; the myriad options available to manipulate your materials using audio editors, processing plug-ins, samplers. I’m not at all interested in building my own Max patches or discovering a new type of bleep, but I get very excited when technology allows us to engage with music and sound in different ways. Notes on a page have power and will always be important, but using production technology to play with psychoacoustics can make your listener feel things in a different way – and the creative/expressive potential of that thrills me just as much as the former.

And what about your own studio setup? What software did you use in the production of Feather Hammer?
I used to have a neat little studio built into my house, unfortunately it’s gone now. It had a nice little live room and really well treated mixing/control room, and that was where I did almost all of the production work on Feather Hammer. I used Logic 9 exclusively for the project because it was easier to keep things mobile and shared between a few different computers and laptops. I recall making very frequent use of the flex/stretch audio functions in Logic, and making sampler instruments out of recorded bits using the ESX24. I also used the FabFilter plug ins, StutterEdit and the PaulStretch application quite a bit.

What piano did you use for the recording of the album? Tell us about some of the microphone placement.
I recorded a bunch of different pianos in different environments using all sorts of methods; stereo pencil condensers, clip on mics, SM57s, omnis, even my ipod touch voice memo recorder. All into a focusrite sapphire pre-amp, straight into my macbook pro running Logic. The pianos that feature most prominently are the Yamaha grand from Koolworld studios in Luton, and a Yamaha upright that lives in my friend’s house in Cambridge (where I was housesitting during the summer of 2011), and this is mainly because I had unrestricted access and spent a lot of time with those instruments collecting various assets to use. With mic placement, I just tried to get as much of the performance as possible on all available channels. I generally thought about it in terms of proximity: up close with the strings, fingernails, pedals, hammers, chair squeaks, doing the traditional piano mic set up to get the music, and finally, making sure I always got enough ambient/distant sources from the environment I was in. That said, after all that effort, some of the most useful sounds I got were from phones and ipods.

When you imagine yourself composing a soundtrack for a film – what kind of a story do you envision it to have?
Horror. I just love scoring horror. I think that appeals to the old goth in me, I really like creating dark, tense music.

What are you working on right now, and what can we expect next?
For the next few months I’m focussed on writing up my PhD, but I do have some music bits in the pipeline. I’m in the process of finishing off my first string quartet, and I have just completed a set of solo piano works that I want to record the ‘journey’ of, recycle and fashion into an EP release at some point. If the fates smile upon me and I manage to get the grant that I applied for, I’ll be starting production on an album of vocal works in April/May. And beyond that, so much other stuff. I’ve always got too many ideas!