Let’s start at the very beginning. Can you tell us how you got involved in composing, and what was your very first piece of gear?
Alright! My first piece of recording gear was a mono cassette tape recorder with a built-in microphone and speaker and I now find it remarkable that back then I never once thought that the sound wasn’t good enough. I recorded my band with it and everything and we all loved it and thought it was perfect. It must’ve been! In terms of composing, I always tried to understand how the music I heard and learned was put together. Only with some analysis is it possible to remember longer passages or a lot of music – even remember something that you played a long time ago! So once you learn how it works you automatically begin to see alternative avenues in what you’re playing and it became harder for me to play something simply as written – only when a composition is super convincing is it easy to play it down without changes – and I suppose that’s the beginning of composing.

How many different studio iterations have you gone through, and what does your final setup look like right now?
I have been working out of the same room for a good solid time now – 2020 is Lichte Studio’s 10th anniversary – and a few things have come and gone in that time. It’s important to me to keep a simple but excellent quality setup because I find it interrupts the flow when, as is the case with many studios, half the gear is in need of service or simply unusable. It is difficult to keep things running well, and the first prerequisite for that is to have them in constant use. You only know how those things are doing that you always have your hands and ears on. Even the most sturdy piece of equipment becomes a potential for problems after it’s been idly sitting on a shelf for a year. So I always try to improve my workflow without creating sleeper gear in the process. The answer is usually fewer but better options. 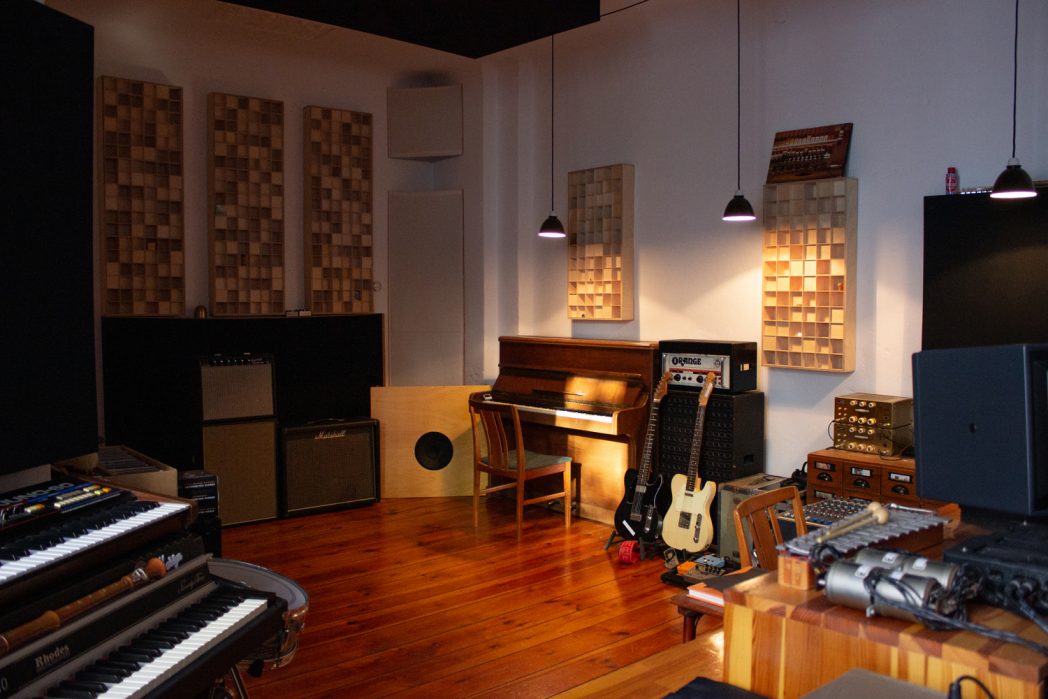 Tell us about your favorite piece of hardware.
Uhm, it may be just a guitar speaker – a Celestion G12 form ’63 – that I use all the time and the sound of which I absolutely love. Also, for its 10th birthday this year, I got my studio a Studer 962 mixing console which sounds fabulous and has naturally been getting a lot of attention recently. The Förster piano at Lichte is one of the best uprights I’ve played. My Binson Echorec always does something cool. I don’t know, I don’t have a favorite because if I don’t love something it doesn’t stay. My studio is my favorite piece of hardware.

And what about the software that you use for production?
Some pieces of software I wouldn’t want to be without are Avid’s Pro Tools, DMG’s Equilibrium EQ, and RME’s Digicheck meter. And the Mac OS.

Is there a particular piece of gear that you’re just dying to get your hands on and do you think one day you’ll have it?
Really not. Gear has simply become the most overrated aspect of music production. Knowledge being the most underrated and time the most overlooked. The possibilities and the quality of today’s gear are very high, while at the same time the knowledge of how to use it is paper-thin. It’s really getting funny. And I mean this from a purely technical perspective! In terms of artistic output, it’s pretty much all down to attitude anyway as far as I’m concerned. However, I will say this: great pieces of gear can be interesting teachers and someone who has used most of the classic microphones and compressors, for example, will have a better idea of what the possibilities are with these things and may be able to use supposedly ‘lesser’ pieces to greater effect. But again, I would never wait for any gear to get something done or think any job depended on a particular machine. Use the best you’ve got and get on with it. All the great recordings were made with what people had available to them at the time and Picasso already knew: when I haven’t got any blue, I use red. 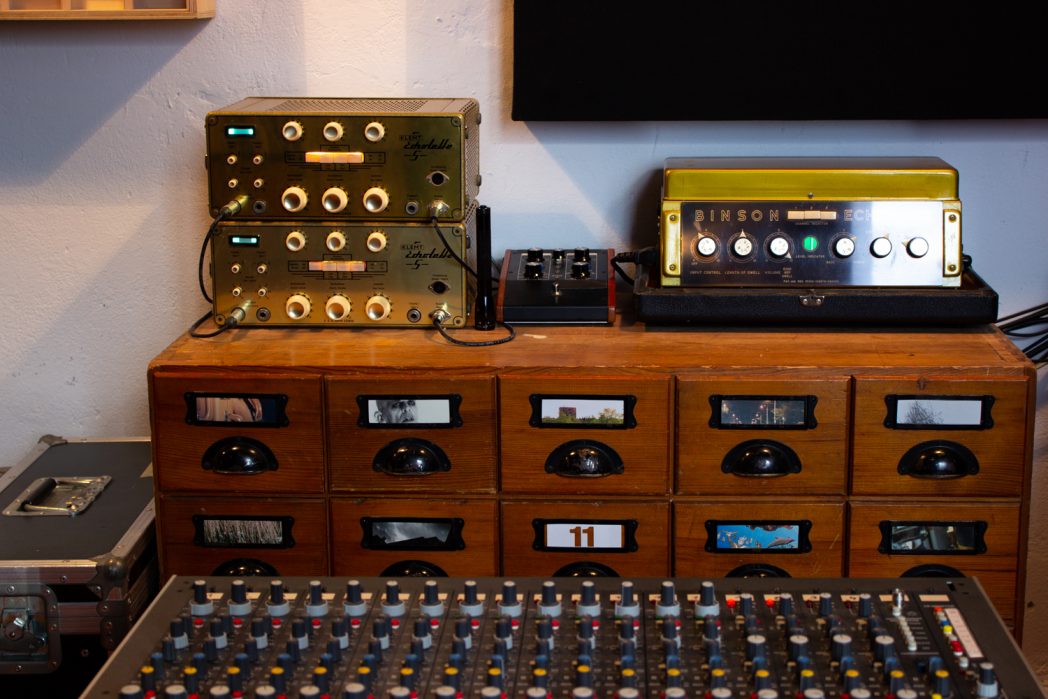 Can you please share some aspects of sound design in your work?
Yes, my sonic rule of thumb is: the earlier the better. The sound design starts in the arrangement and continues in the recording. For example, why are all pianos recorded the same way now? I think – and this goes for any instrument – that there isn’t any single best way to mic something but one needs to have a clear idea of the sonic role of an instrument in the music before recording so that one can find the appropriate sound at the beginning. The earlier the sound is ‘designed’ the better.

Any particular new techniques that you tried out for your new album?
Yes, to illustrate, the piano on ‘As Mad As Man’ was recorded with a single microphone from a bit of distance because in the mix it comes in as this extra character off to one side and not at the front of the stage. The piano on Neuwerk, however, has big slamming chords that are wide and happening around the centre – drums, bass, guitar – of the music. So it’s miced closely and in stereo. The chords are also in a low register so the stereo pair is pretty far to the left of the piano to centre this particular part well in the mix. These two parts are recorded on the same piano in the same room but had the micing been reversed, they’d have been unmixable. Arranging and recording purposefully makes a great mix come easy. 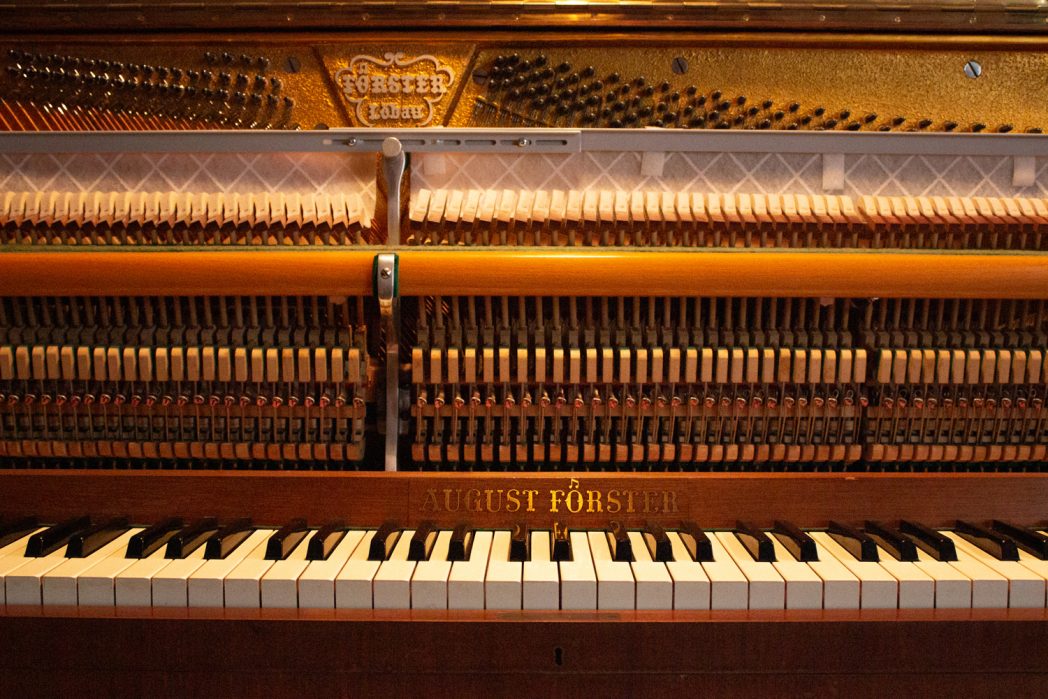 What does your live setup look like, and what do you bring with you when you travel for an extensive tour?
I need a guitar, an amp, and an echo. After that, it’s season to taste. I’ve played shows with my drum machines and with (fantastic!) drummers, and with both at the same time, and without either and like all these options. Other than that it’s important to me to have zero-latency monitoring which is most easily achieved by having a good-sounding amp close to me. In general, monitoring is underrated – when the performer hears something too different from what the audience hears, much of the live magic is lost.

What is the most important environmental aspect of your current workspace and what would be a particular element that you would improve on?
For a music studio where you work long hours, I have found the two most essential qualities are silence and sunlight. And while both could sometimes be even better here, I do have them. Lichte Studio is also located next to the former Berlin Tempelhof airfield that is now a public park right on my doorstep. 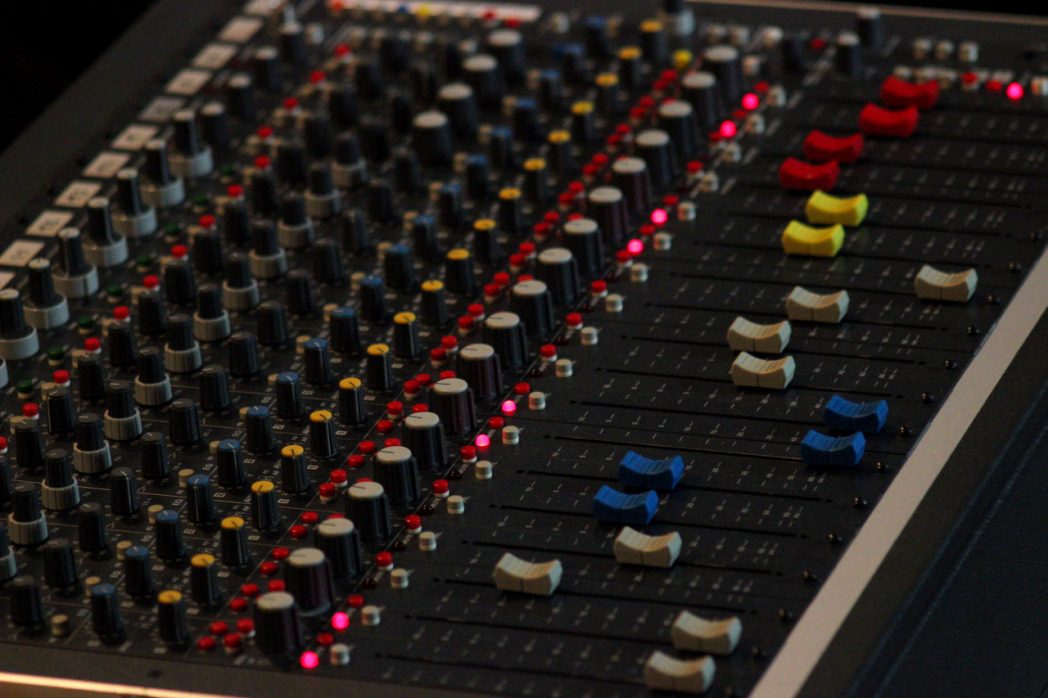 What can you tell us about your overall process of composition? How are the ideas born, where do they mature, and when do they finally see the light?
First I have to sit down and try to come up with something. That part can’t be skipped. Then the idea has to be strong or substantial enough. A too tiny or fragmented idea isn’t the beginning of a piece. Ideally, it pretty much comes as a whole and only needs working out. Bits to be attached or ironed out and so forth. If a fresh idea has come, it’s good to shield it from anyone. It can easily get crushed or, worse, watered down at the beginning. Play around with it for a while until it has become stronger. When I think a piece is ‘finished’ is when the trials really begin. I play it live, record it, and so forth. That way I’ll naturally start to make adjustments. ‘The Hall’ was originally 15-17 minutes depending on the tempo. After a long tour, it was about 10, the album take is 7. At some point, a version crystallizes that I rarely want to change. Then it has arrived.

After the piece is complete, how do you audition the results? What are your reactions to hearing your music in a different context, setting, or a sound system?
That’s a great and important question. Personally, I think of my compositions rather than my recordings as the work itself. Many times nowadays we think of the recorded music as a work of art, and often it doesn’t exist in any other way, so it makes sense. Music, however, is not originally recording based and there are many musical functions that don’t fully translate to the recording. Music, as performed live, will not be fully captured in a recording. This is not only a technical problem – although it’s also impossible to fully capture just the sound technically – but the bigger problem is musical. That’s because things like timbre, volume, dynamics, acoustics, and tempo all interact and are situation dependent. What feels moderate at 5 p.m. may seem too fast at 2 a.m. The reverb on a mix made in January may seem excessive in June etc. In a performance, these things are automatically, often unknowingly even, adjusted to the situation by the performers. On a record they are frozen and the best one can aim for is that all parameters are coherent within a given recording. They might, however, not always fit the reality of the listener. These basic functions of music are often overlooked and are the main factor in, for example, why inexperienced musicians may obsess over a production endlessly. They don’t consider enough that different playback systems and situations, and even they themselves, change, and therefore aspects of the recording sound better or worse depending on the context. Of course, recording on the other hand can do many things that aren’t otherwise possible. If one takes it for what it is the frustrations fall by the wayside and it becomes a fun and wonderful exploration of sound. 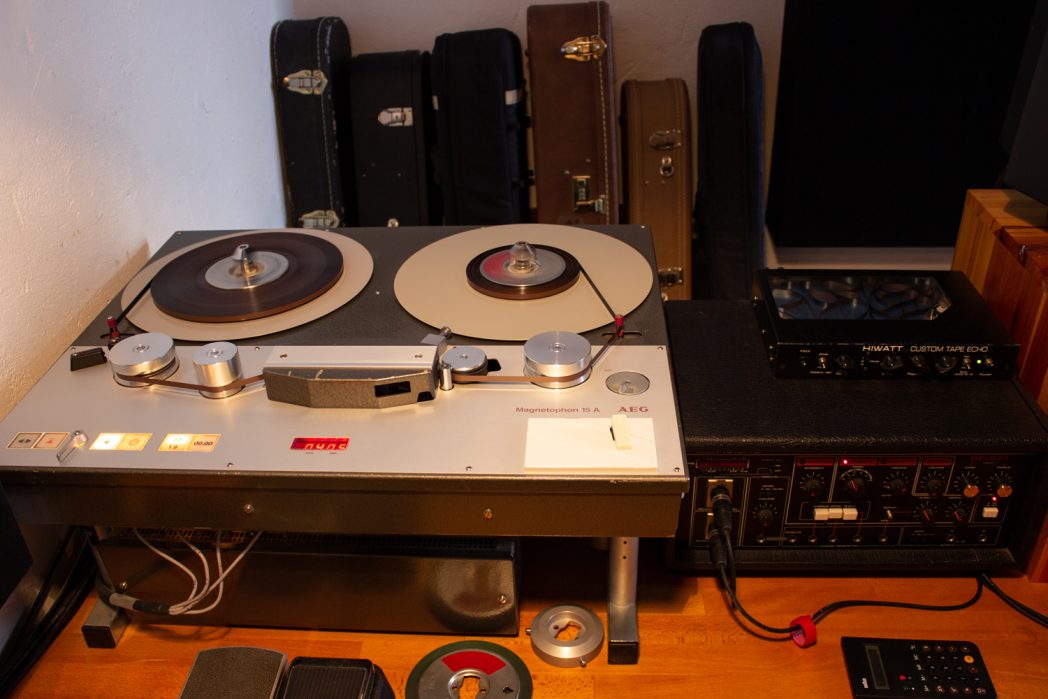 Do you ever procrastinate? If so, what do you usually find yourself doing during those times?
Sorry, what? I was on my phone. Can I get back to this question on some unspecified day in the future?

What gets you inspired?
Well, that’s exactly what I would like to know! Really though, I believe that inspiration has to be sought out regularly. Reading, looking at things in museums, walks, the usual. Nothing in, nothing out! That’s where the Tempelhof airfield just outside comes in handy again. This last photo was taken there tonight. Thanks so much for having me in this series and letting me talk about music. 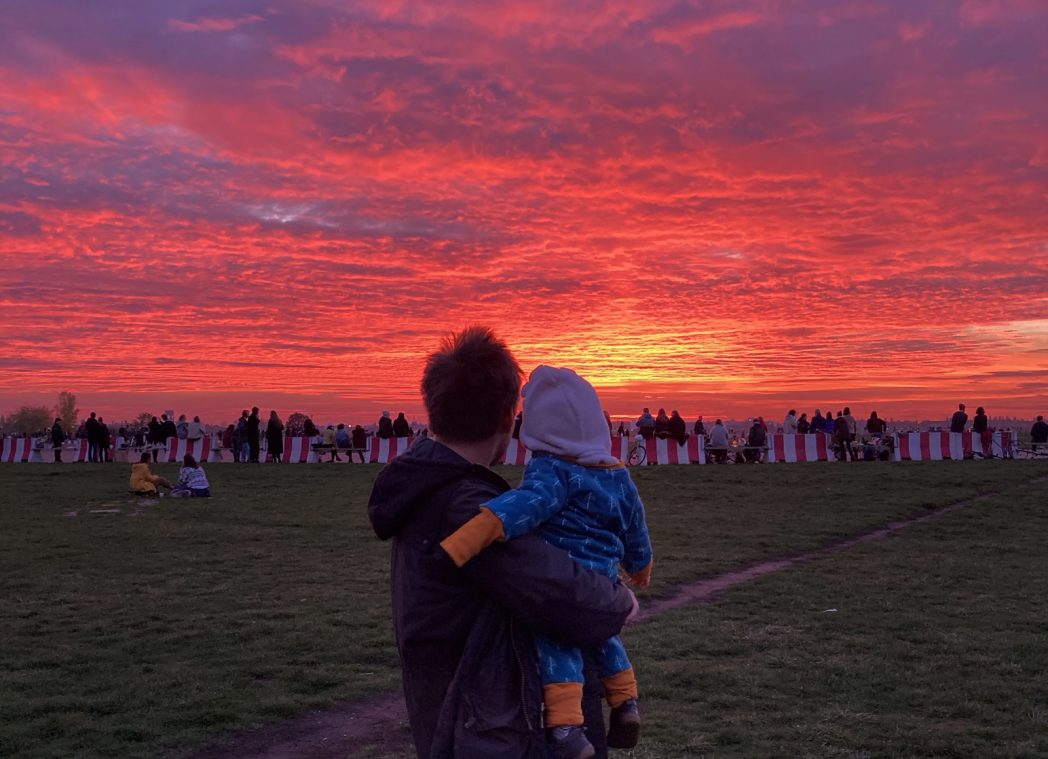