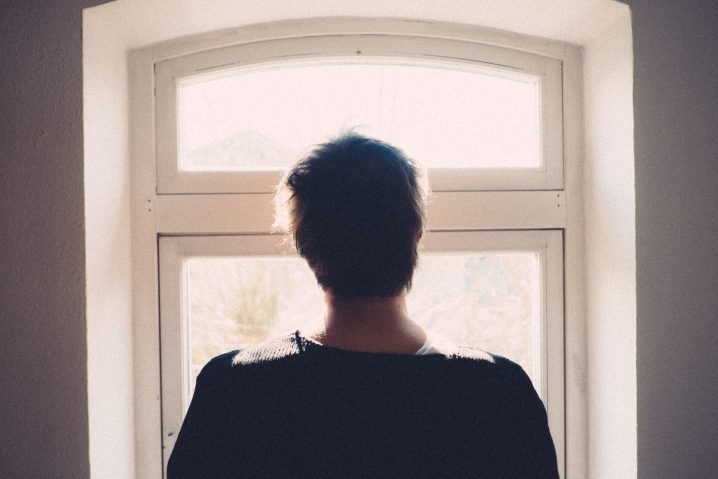 Let’s start at the very beginning. Can you tell us how you got involved in composing, and what was your very first piece of gear?
At the very first beginning, there was a good friend of mine playing guitar and starting to compose his own music when we were 14 or 15 years old. I never learned to play an instrument but I really felt like I want to create something too. At that time I was heavily into computers, games, and programming. So it felt natural to me to create music by using the computer. Since then I was basically making music in the box and when I was 19 I got my first synth, which I still use, a Korg Polysix. Still, I do many things with software just because it feels so natural to me. 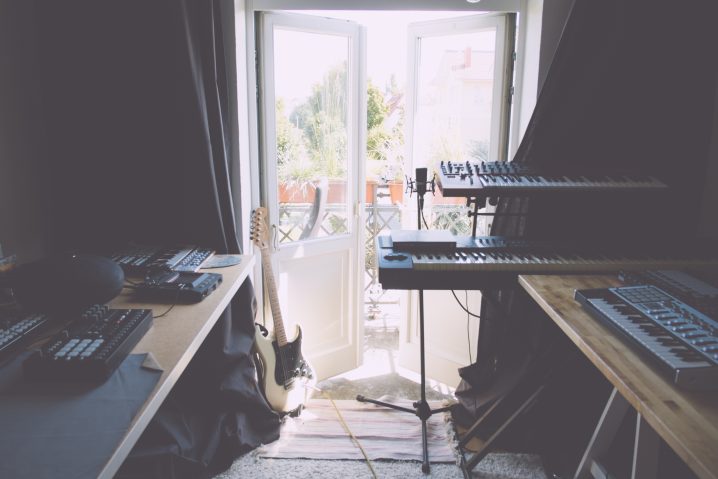 How many different studio iterations have you gone through, and what does your final setup look like right now?
I moved places quite often in the last years so I had quite a different workspace every year. I never had a separate studio, it has always been a part of my flat. At the moment the room is a bit smaller again. Before that, I had a studio that I also used as a painting atelier. Now it’s for music only and focused on functionality by just having set up what I really use. 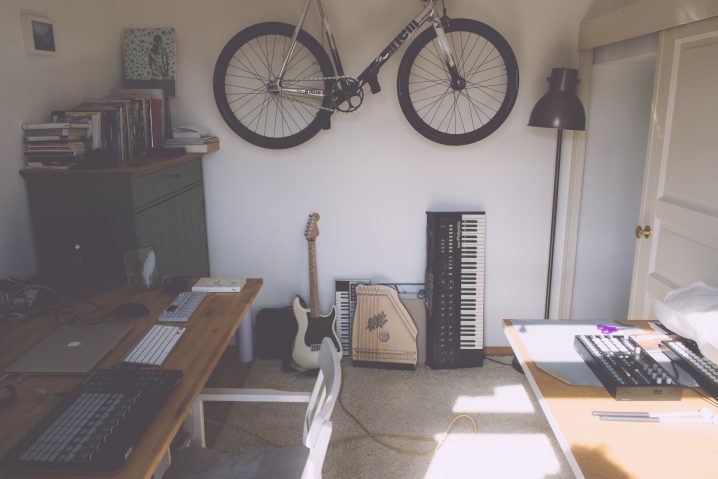 Tell us about your favorite piece of hardware.
Even though it’s not a synth or effect, the Olympus ls5 field recorder in combination with Ableton Live feels like an instrument for me as I’m using it on nearly every piece. Still, I do many micro-recordings playing just a chord on the Nord Lead for example but recording it with this little thing and creating something from it with Sampler in Live or Native Instruments Battery when it comes to percussion. Also, I like to record external sources and work with it on the Teenage Engineering OP-1. 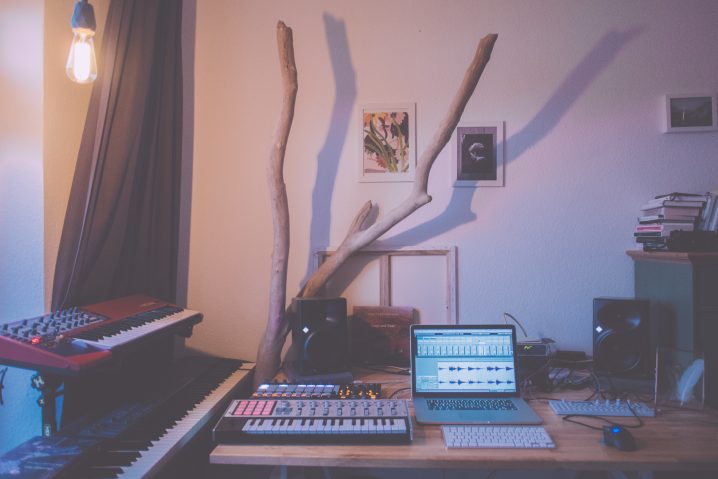 And what about the software that you use for production?
I went to many different programs and combinations of them. A long time I was using Cubase in Rewire with Reason. Also, I was working with working with Logic a long time ago when it still was a PC software. Since I started playing live with Ableton Live, I also switched to it for productions. 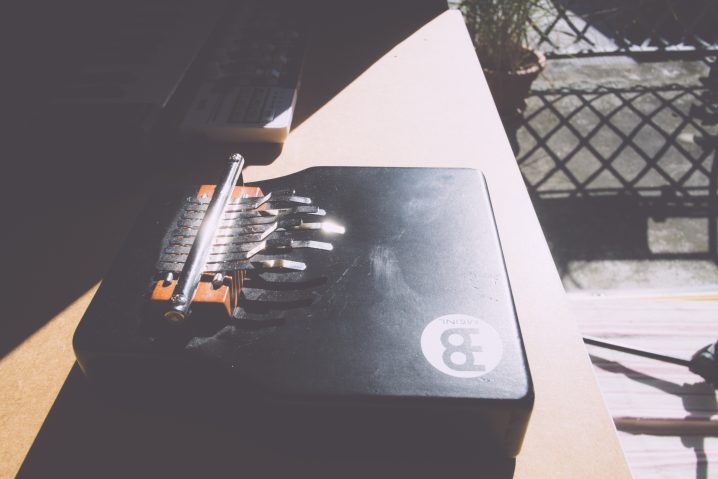 Is there a particular piece of gear that you’re just dying to get your hands on and do you think one day you’ll have it?
At the moment I starting to collect a little range of pedal effects. A friend showed me the Montreal Assembly ‘Count to Five’ which is really interesting. Also, I’m looking for the Tonal Recall. 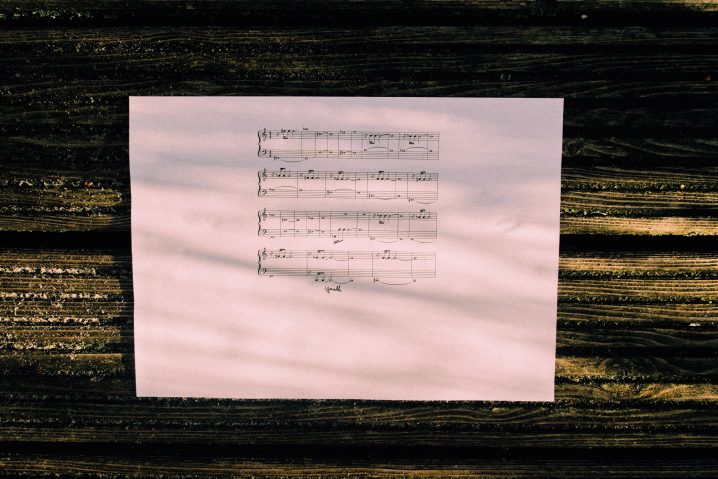 Can you please share some aspects of sound design in your work?
For the percussion, it is a lot of layering. I have all those little sounds recorded by myself or super small parts, pitched and reworked from libraries. So for a snare sound, for example, I can have up to 6 or even more sounds playing simultaneously all with different velocity and timing. Melodically my music is always based on pad sounds. So when I’m starting with something I’m looking for a good lively atmospheric basement. Underneath that there is usually a heavy sub bass as a fundament. For finding my sounds I use Native Instruments FM8 as an effect on the channel. Building effect chains in it and putting in on samples or synths. My favorite is the Psyche/ Delay. 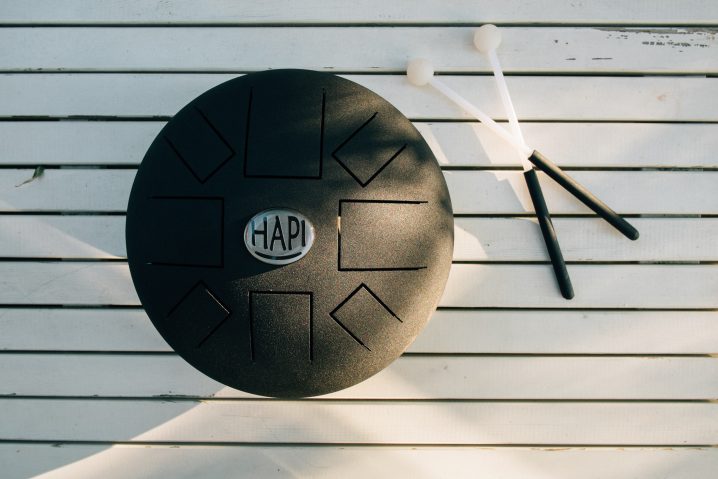 Any particular new techniques that you tried out for your new album?
I recorded a lot by myself. ‘Silk’ is based on a melody I played on a little kalimba. Or in ‘Pacific’, I played the lead melody on a steel tongue drum. Some rhythms are tapped on the table for example and I converted the recording into a MIDI file triggering samples. 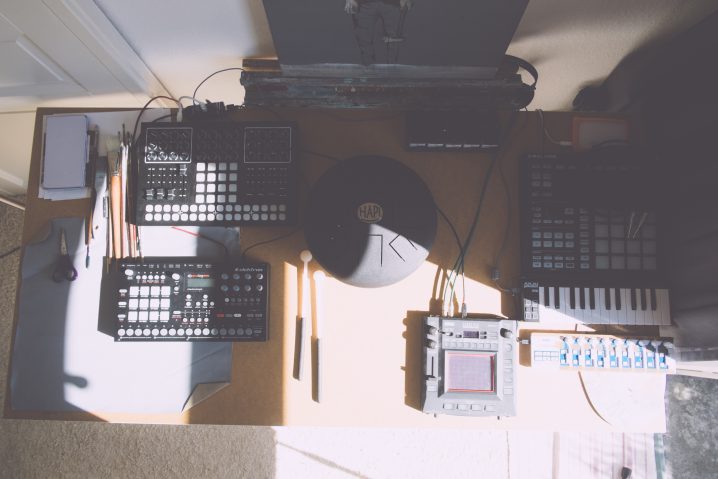 What does your live setup look like, and what do you bring with you when you travel for an extensive tour?
Right now the setup is me, Mohna on the vocals for our collaborative tracks and a friend performing the visuals that filmed myself. I use Ableton Live controlled with an APC 40 and an old UC33 Evolution. All the drums are coming from the Elektron Analog Rythm. Besides that, I have a MIDI keyboard which I use to play key elements in some tracks. Also there a piece of wood with a contact microphone which I can knock on for wooden sounds running through filter, reverb, and delay. 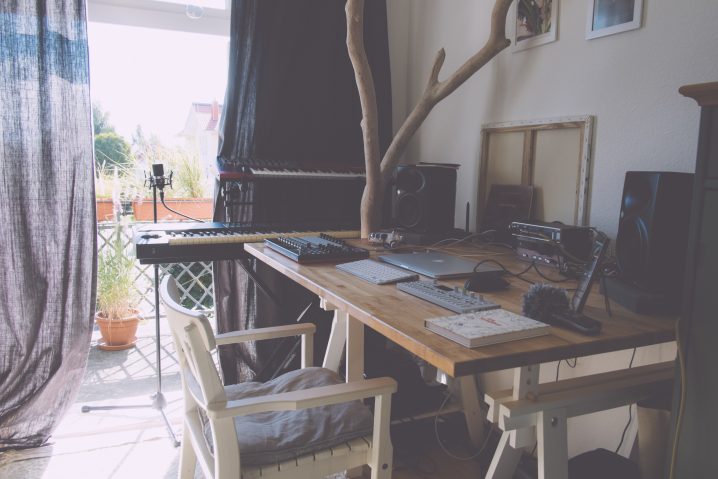 What is the most important environmental aspect of your current workspace and what would be a particular element that you would improve on?
The room isn’t treated acoustically at all. So that’s definitely a point I would love to work on. 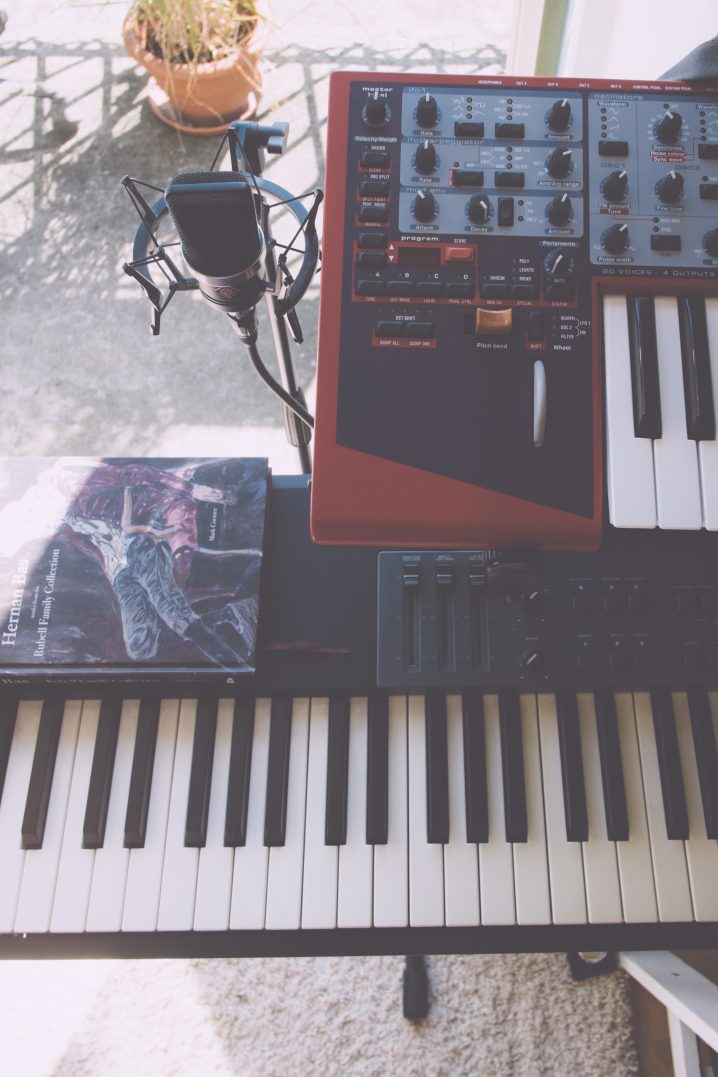 What can you tell us about your overall process of composition? How are the ideas born, where do they mature, and when do they finally see the light?
I’m trying break out of my routine. After all the years you have strategies that are always leading to a result. But now it really feels inspiring to experiment. For instance by just putting an insanely huge line of effects on an arpeggiator melody, sampling, cutting and pitching it, again some more effects, so it becomes something really different to the original material. If you record this again and play just a short single note on the sampler, you will probably come up with an interesting new sound. The pieces that I’m really satisfied with have been finished super quickly, sometimes even in one or two days. Sometimes you hear it and it I maybe would like to polish it and add some details but everything is already said and it’s honest just like that, so I stop working on it. The best ideas don’t really mature. Usually, I don’t go back to an old project, I just start something new. That’s why I have hundreds of loops. 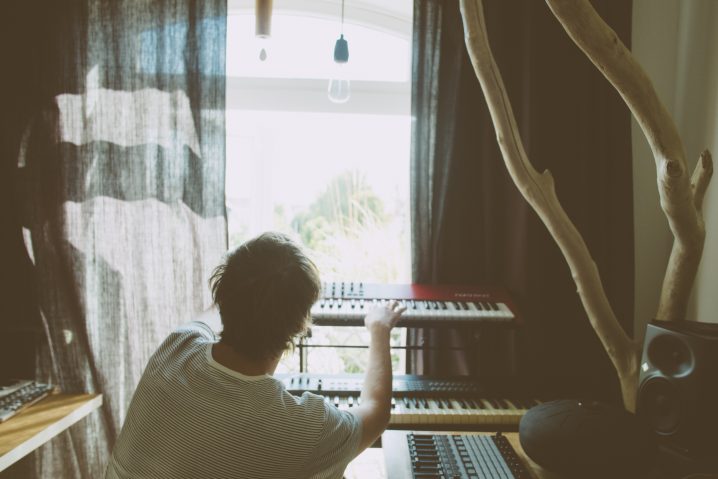 After the piece is complete, how do you audition the results? What are your reactions to hearing your music in a different context, setting, or a sound system?
I have this routine that I upload my sketches to a private soundcloud account combined with a photo. I always have a picture for every piece I create. So if I have a walk on the beach I’m listening through it. And being outside, having an open view, brings new ideas how the song could evolve from there. 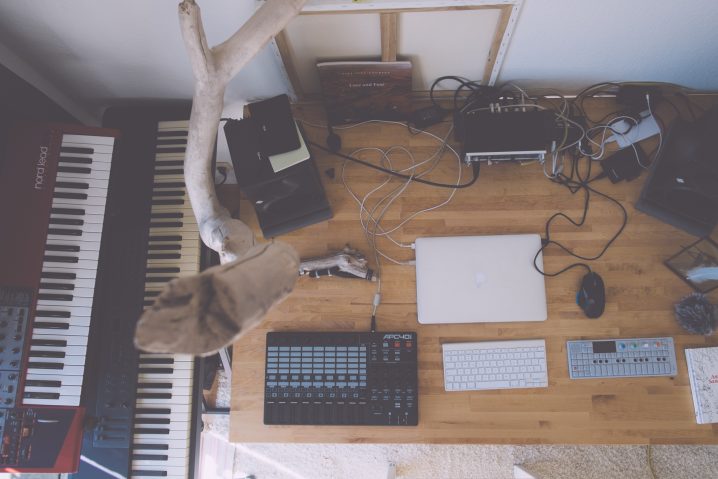 Do you ever procrastinate? If so, what do you usually find yourself doing during those times?
I take a break for some days or even longer and do something else. Maybe not even listening to other music. Riding my bike and going for a swim is always refreshing. 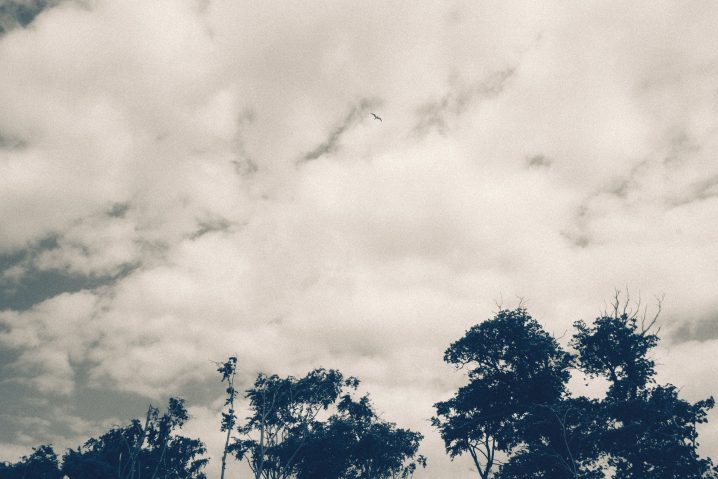 What gets you inspired?
It’s mostly the silent moments. For example, while traveling when you’re sitting in a taxi or train after a long flight and everything is passing by. Also, I’m very interested in art like painting or photography. So discovering new artists or seeing exciting exhibitions are getting me inspired. But of course also music, books, and movies. 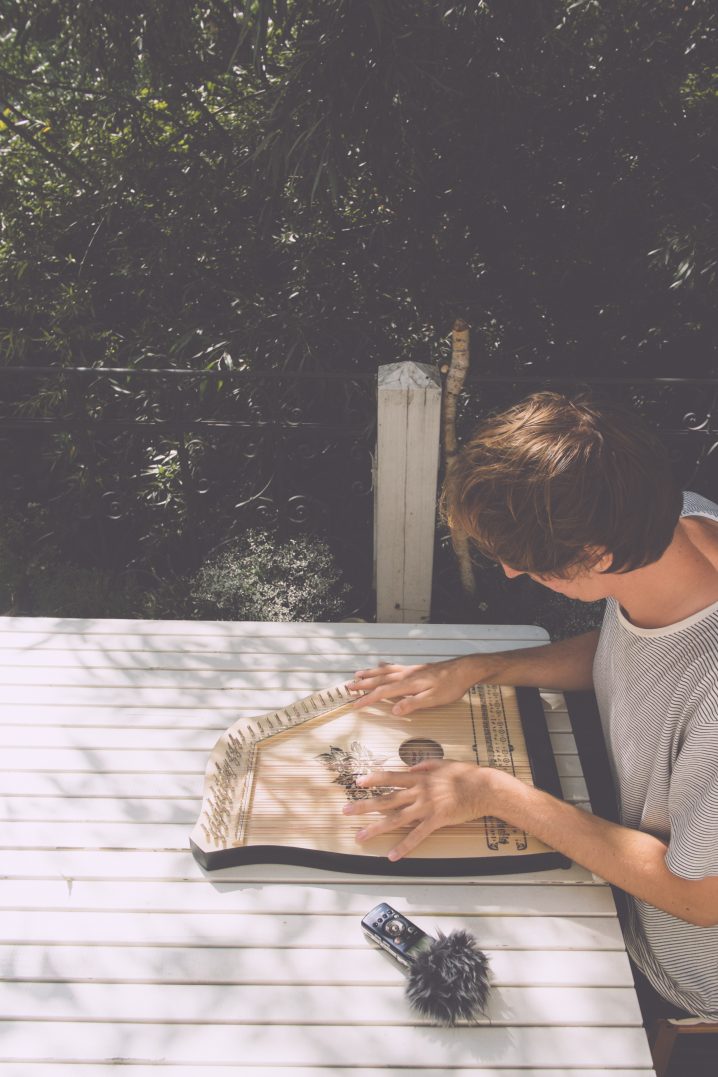