Let’s start at the very beginning. Can you tell us how you got involved in composing, and what was your very first piece of gear?
I started playing music when I was 8 and my first piece of gear was the piano. I wanted to be a pianist but happily, the music school teachers persuaded me to play the cello (I was too old – according to Polish standards – to start learning piano professionally). Somewhere in secondary music school, I realised that I wasn’t interested in playing classical music. However I still wanted to play the cello – so had no choice and had to join a classical university of music. In Poland, there were no schools preparing you for being involved in any music other than classical or (classical) jazz. There were no production / sound design departments. And studying composition – that was something that was treated very seriously, in another very traditional way. I had never felt I was good enough to try to do this and so I started composing when I left university and put all these old-school, conservative attitudes behind me. Probably something clicked in my head when my friend and producer/ non-classical composer (who also finished university of music) told me that I should try to write my own music. It started seriously when I was invited to write music for a dance performance for the first time (when I also used delay and looper). It was a loooong way in my case. 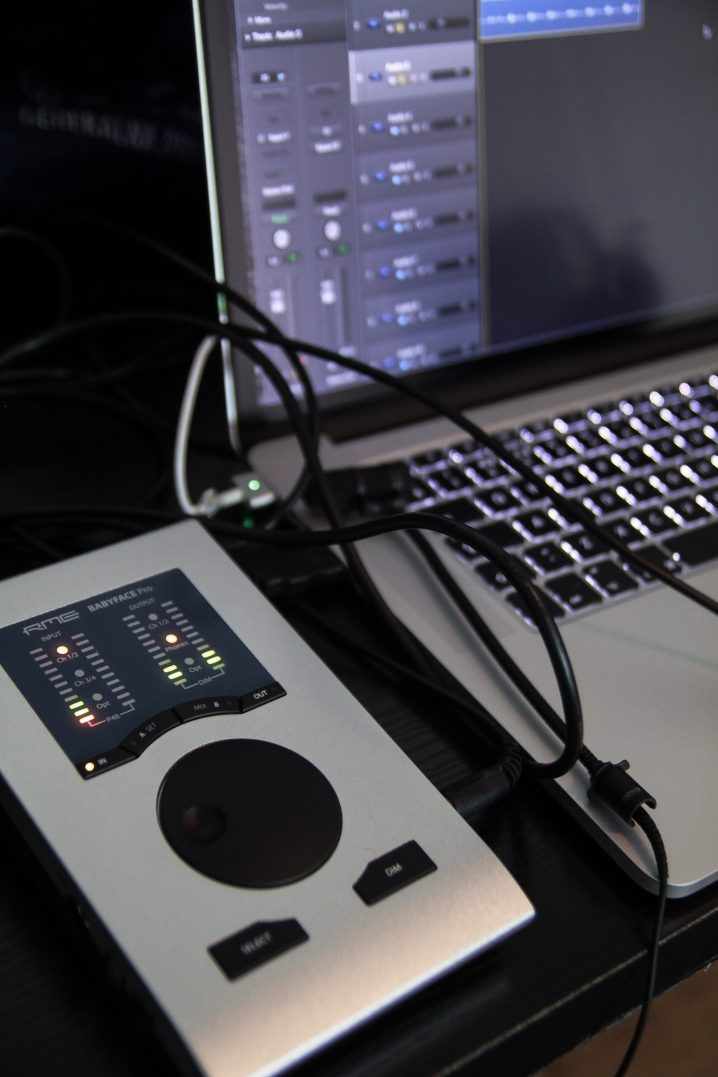 How many different studio iterations have you gone through, and what does your final setup look like right now
I’ve never had a proper studio, but I have a brand new place which I call my rehearsal room – actually right now I’m organising it and I think it’s my first real music space. I share it with my friend M8N: I have some basic monitors borrowed from him (don’t know the name yet!), an RME Babyface and a bunch of small musical instruments (old toy synths, a zither, bells etc.), but I still haven’t set up most of my gear, so that’s why I can’t show you the final effect on photos. I can write music, do some basic stuff there and record demos but I wouldn’t really call it a studio. Actually I’ve been working for many years at each of the places I have lived – and happily, people living with me have never had any objections(!). I usually record outside my own room/ studio because I really do love to work with different producers in different studios, to learn about how they listen to things and what they do with them.

Tell us about your favourite piece of hardware.
No surprise here: it’s my cello, a real piece of luthier art which I bought in Warsaw when my previous cello (which I didn’t like) was damaged. It was made in Brussels, but I don’t know how it came to Poland. It has a very inspiring, deep and quite dark sound. 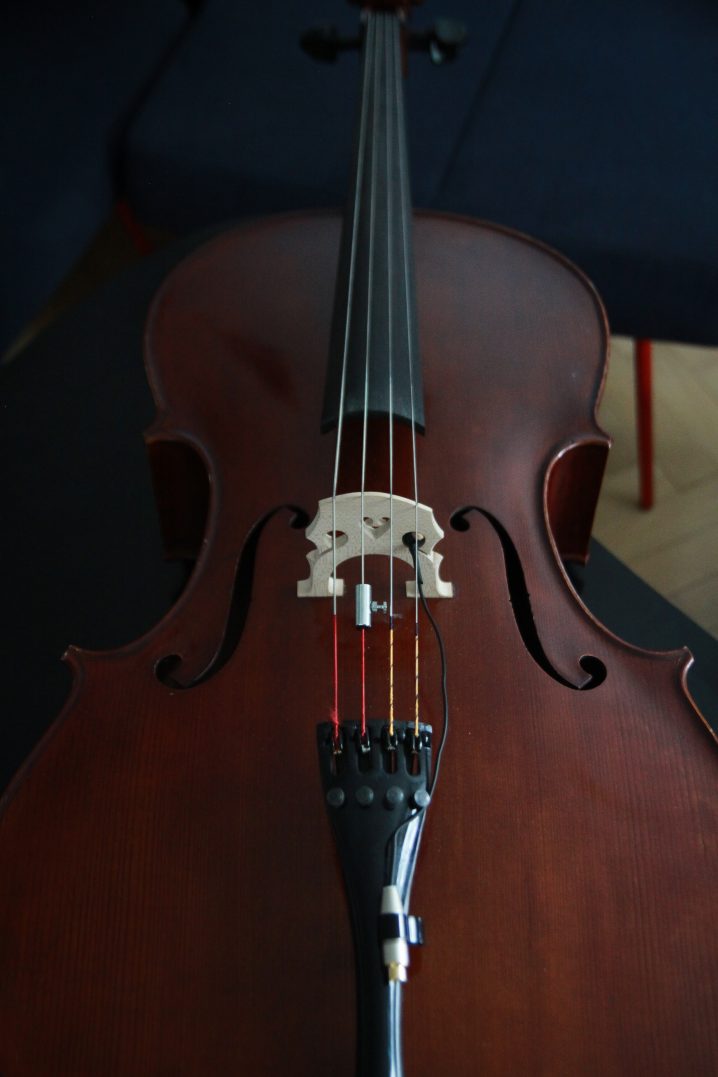 And what about the software that you use for production?
I’m used to working with Logic (on a very basic level). However, Ableton is the thing I’d like to learn now.

Is there a particular piece of gear that you’re just dying to get your hands on and do you think one day you’ll have it?
Although I think about and treat my cello a bit like a synthesizer (using layers of effects on it etc.), there is one synth which I would love to have and learn one day: a Synthi AKS. I’d also like to try all existing brands of contact mics on my cello and choose several the best. 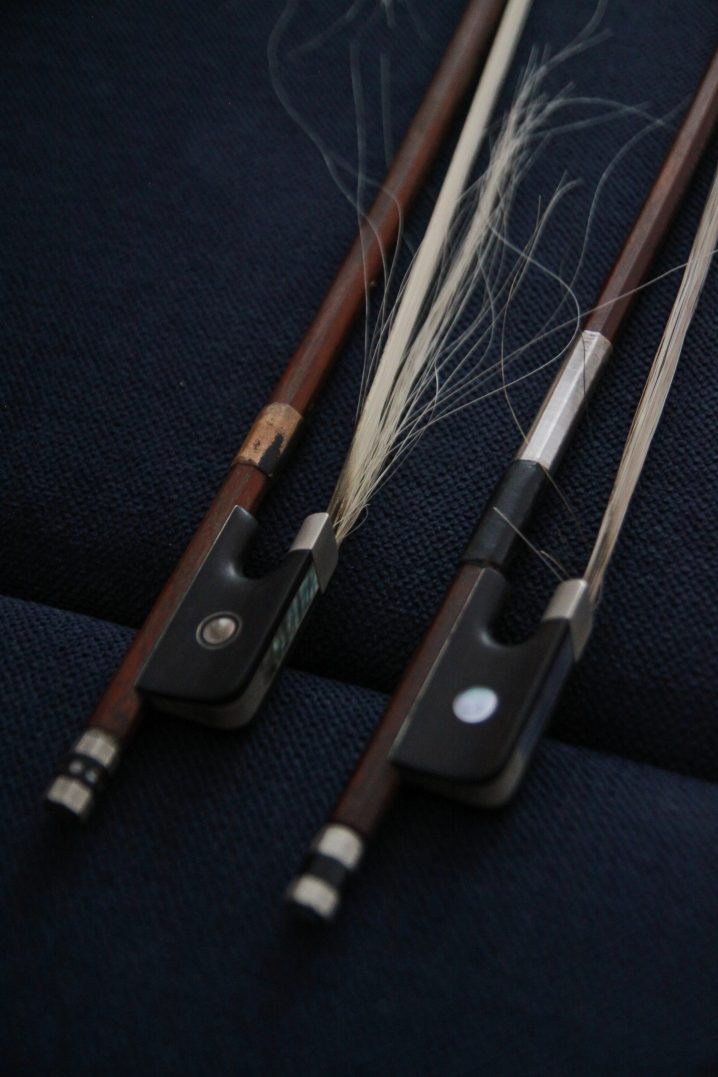 Can you please share some aspects of sound design in your work?
I like to experiment with natural sounds – sounds which come from my mouth or my instruments, but they are not simple “sounds” – or rather, we can say they sound more like accidents or mistakes. Actually, that’s how I started composing: looping / building many layers of sounds which came from the cello but which are comprised of more airy / ambient noises than a pure / clean sound.

Any particular new techniques that you tried out for your new album?
I have been using my voice more and more, and right now I’m learning how far I can go with that and what types of different sounds I can create. 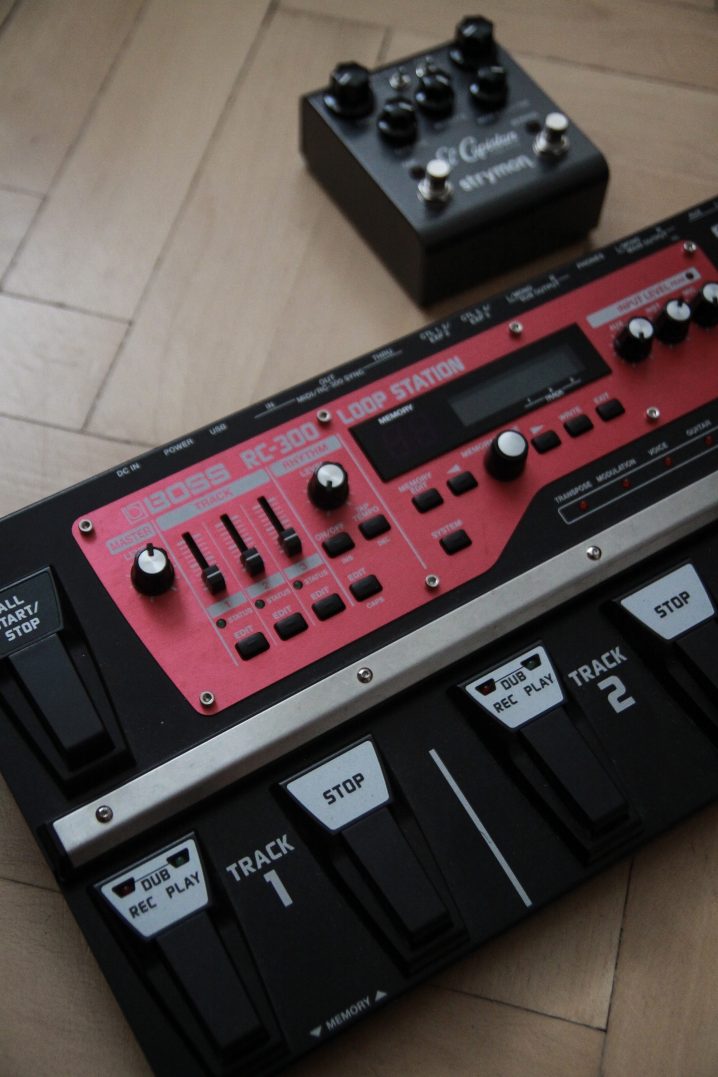 What does your live setup look like, and what do you bring with you when you travel for an extensive tour?
It’s a loop station, reverb, delay, DPA mic (however on the photos you can see Schertler’s bridge-mounted STAT-C contact mic, which I test now), an in-ear monitor – all of that gear always travels with me for live shows. Basically, it’s just hardware. What I ask for as back-line is a simple mono synthesizer: usually a Micro Korg which is easily available everywhere. That’s for now but I’d like to change some things in the future – especially in terms of experimenting with my voice.

What is the most important environmental aspect of your current workspace and what would be a particular element that you would improve on?
It’s a new space for me, I still need to learn it, but probably we’ll have to work on the acoustic aspects of the room. It’s a basement, where there can be a nearly ideal silence but unfortunately, there is no natural light there – though a very special lamp which imitates a natural light helps a lot.

What can you tell us about your overall process of composition? How are the ideas born, where do they mature, and when do they finally see the light?
Usually, it’s a long process. I feel that we live in times of overproduction in every aspect, so I don’t want to produce so much when I’m not sure if my work is good or if I’m just not happy with the final effect. I prefer to produce music which – at that certain moment – has no compromises in my ears and is rather a challenge for myself. I’ve noticed that lately I actually have a pattern of “working from scratch on a new thing”: during my composing process usually two things happen simultaneously. One is starting from some kind of an intellectual background which means I’m interested in some certain idea/ part of science which involves me strongly. I learn, watch movies, read books, dig into that subject a lot. At the same time, I do a lot of improvised sessions, sometimes with no specific purpose. I try and catch what touches my attention and work more deeply on that. This may be a strange mix but when I’m really focused on these two things I start to see some good results, a kind of intersection of what we call intuitive and intellectual. 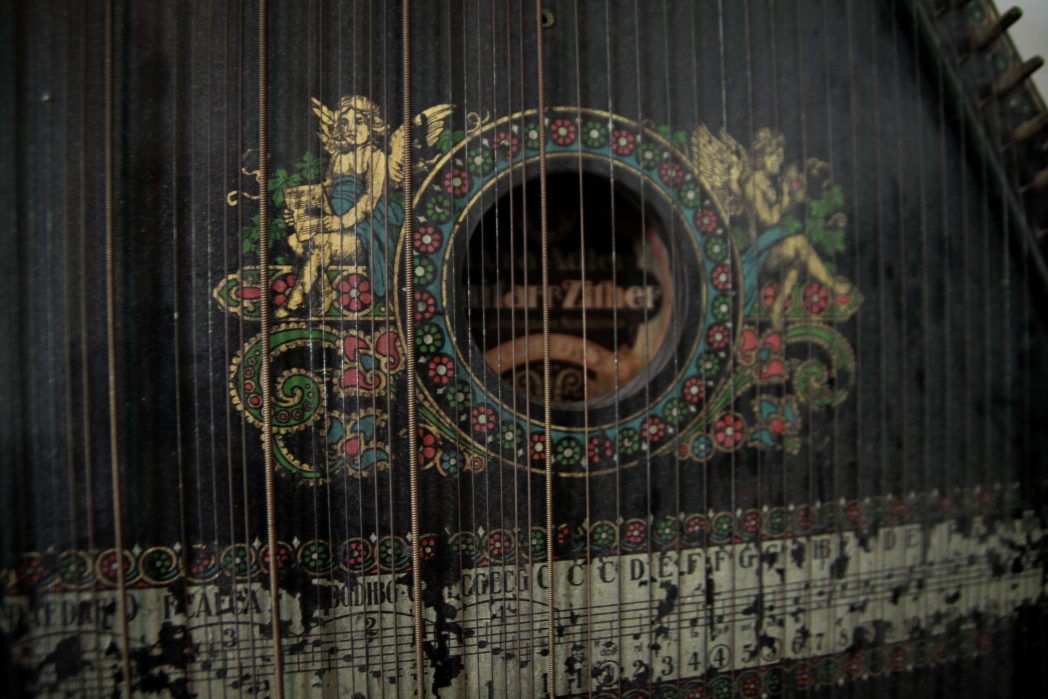 After the piece is complete, how do you audition the results? What are your reactions to hearing your music in a different context, setting, or a sound system?
Usually, the first listener is my husband – he’s interested in music generally and is super honest about his impressions, so I like to ask him about that. I try to listen to the mixed pieces on any available pair of high-quality monitors in the studio (which usually brings a “wow” effect but is also a bit far from everyday reality), and on my own monitors which I know very well, a pair of popular Yamaha MS10 speakers. I will also listen on headphones which I use (f.e. DT770) and on laptop speakers (I learnt that’s a very important tool for verifying any drastic moves in EQ). I really like doing all of this when it’s possible but it’s also a super exhausting type of activity for me. It’s important for me to listen to it and not be looking at a screen at the same time.

Do you ever procrastinate? If so, what do you usually find yourself doing during those times?
Oh yes, sure, although it happens mainly when I work “for myself”. There are also certain situations when I feel it’s just a part of the natural process when some ideas are working in my head but not ready to be taken away at that moment. Obviously, I try to do some things which fuel the creative process like studying certain ideas/ reading to feel less guilty. Sometimes I just need to do something physical or to take some time outside the city to clear my mind. 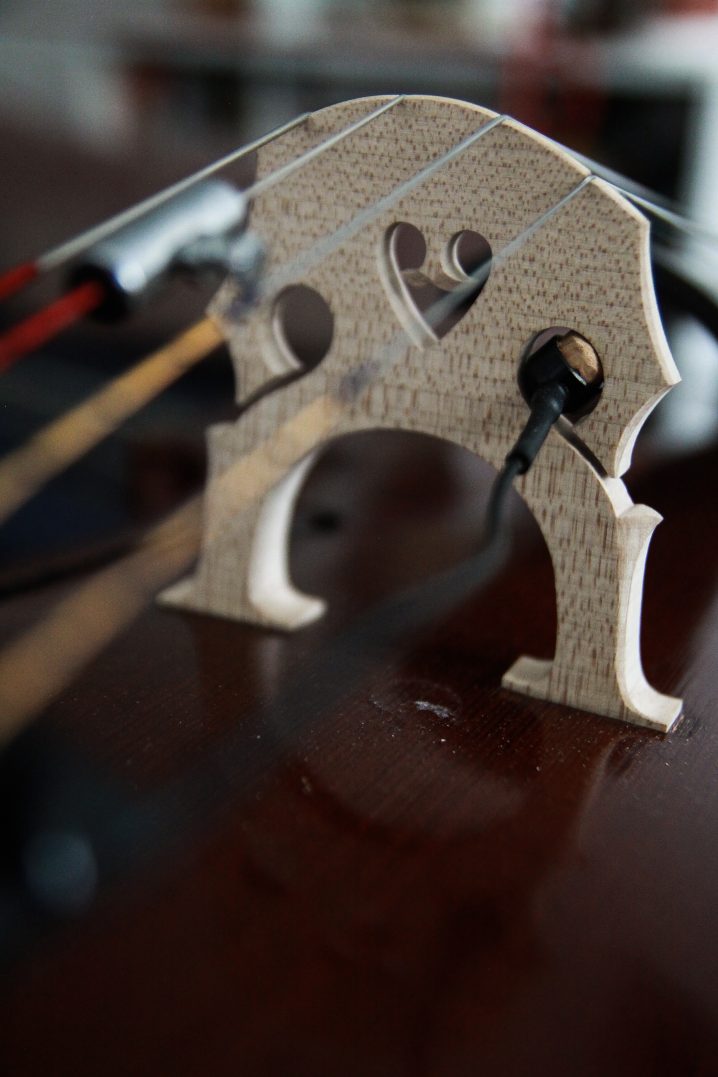 What gets you inspired?
Ideas which bring an emotional/ physical response. Great shows, music which I like, creative people – it’s like a spreading disease: when I hear great sounds or meet an inspiring person I want to touch and connect to my instrument immediately. Also lately I’m very much inspired by this type of art which “happens in time” but uses non-verbal ways of communication, like contemporary dance theatre.

And finally, what are your thoughts on the state of “electronic music” today?
I’ve been so heavily interested in electronic music that I can say my own music is very much influenced by the freedom which comes from the electronic music world. I feel like this is the genre which nowadays still cultivates freedom truly and in every aspect. But I must admit that sometimes I miss this type of physicality of sound, this organicity or massiveness which is created not only by the loudness of interfaces, sound systems and the arms race of new technologies. So probably what’s most inspiring in electronic music for me as a listener and creator is mixing those two worlds: the human/acoustic and the electronic.