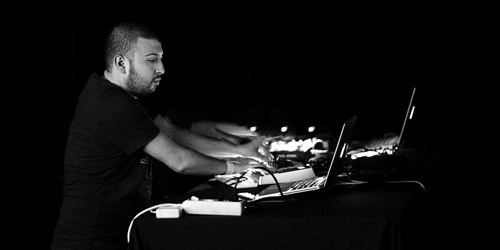 First, I wanted to find out, what does SaffronKeira mean and where does it come from?
SaffronKeira in the literal sense is simply the set of two names attached, Saffron & Keira.  SaffronKeira was the name that I wanted to give my daughter… In a musical sense, saffronkeira is simply looking for sound evolution, sensation-seeking, all without a precise meaning, like a painter who paints a picture in a trance without following any logic.

How did you get into producing electronic music?
oh! it’s a long history… when I was a child, at the age of 8, I spent my days listening to records and looking at the cover art, and when the turntable was spinning I remained hypnotized and I wondered how it was possible – how was the music pressed on the inside? When I turned 12, a new neighbor moved into my building, a gentleman from Genova. My mother once said, “Did you know that this gentleman can cut a record?” I didn’t believe her, but she repeated that it’s true! So I did not waste any time, walked into his studio in our building and asked if it was true that he could make a record? He said, “Yes! I’m an electronic music producer!”

All this might sound strange, but when you live in a small country with a few dwellers, and on an island, where the internet was still scarce, for someone like me, such a thing was something very important and rare! It was just what I needed! so I asked him if I could stay with him in his studio during his music production, and he said yes!

I still remember the first time I ever saw Cubase and Rebirth run on a PC. I was enchanted by just turning the kick drum on and off, and so I spent my afternoons watching and learning how to work a synth and a sequencer, and in my head I was already thinking about when and how I could have my own little studio and make my own music.

In 2004 I bought my first Macintosh, 2 monitors and a keyboard and i started to produce music on my own. Over the next few years, I produced techno and DJ-ed in several places. In 2007 I was in the middle of a crisis of identity for what was my own sound and my approach to composition, or to be more clear, I could not to put out what I had in my head. in those years I produced mainly techno, but every time that some label contacted me for releasing my music, i felt more and more that the things I made and consequently published, were not really from my heart, also the club scene started to appeal less and less as it lost some of its emotion that I felt in the past.

With time I understood and felt the immediacy and the need to create music more personal and different from the mainstream, I felt that it was my beginning of SaffronKeira, it was my time, the time for greater musical maturity, so I started to produce new music, without following a particular path, without a logic.

From my knowledge, A New Life is your very first full-length release. How did you get signed on to Denovali and what took you so long to get a record deal?
Yes it is, the first full length! I sent the label my demo album, I thought they would understand my musical world, and so it was! love at the first sight! It was not in fact that simple to find a label for a release of “A New Life”. I received many offers from different labels, but I constantly refused, because I could not see anything in common between me and them, I was looking for a label that cared a little about everything, from artwork to printing on vinyl. I did not want to leave my album in the wrong hands because I spent several years working on it. It means so much to me, I would call it a piece of life. And so I knew that sooner or later I would find a label just like Denovali who understood perfectly all of my needs.

On your site you hint that there will be a few posts in your ‘experiments’ section. Care to share and tease us with a few now?
for now it’s just some ideas, i must find the time and the right people to accomplish this. One of them is a performance I would create with more elements: audio / circuit bending / video / mapping. All accompanied by typical tenor choir and typical instruments of Sardinia. but for now, as I have said, it is just an idea, we’ll see if it will come to life… Another project that fascinates me is the contemporary dance, cinema and theater, although I am pleased to experience something with my music…

Is A New Life (and its compliment of Old Life) a conceptual album? What is its central theme?
Yes it is, this is a conceptual album. A new life marks and represents two fundamental parts of my life, a pre and a post. A part of suffering and another which still today marks to me, and that at the same time I believe that without these phases of my life I could never make a new life, hence the working title of the album. The central theme is the transition, the exchange rate, maturation, mutation, such as white and black of a part of life.

What is your production setup like?
Computer, audio interface, two monitors, mixer, some synths, drum machines, some external FX boxes, field recordings, osc protocol, various controllers, orchestral library, but most of the entire production runs through Ableton Live with different plugins, i try to make music in a very spontaneous way. I’ll spend a lot of time experimenting with samples of field recordings and play with them until i have an idea of how it will sound later, after i map the plugins to a MIDI controller, so that I’d have the same feeling as touching a button on a real hardware.

What are you working on right now, and what’s next for SaffronKeira?
I am currently finishing my second album and looking for some free time to finally make some collaborations with other artists, constantly refer to lack of time, as I had previously mentioned above. Then this winter I think I’ll go to Iceland to make some field recordings and to begin my third album. Among those dates I must include the magnificent Denovali Swingfest in October this year, where I will perform. I’m also trying to create my own performance with audio and video alone, without the aid of a second person.