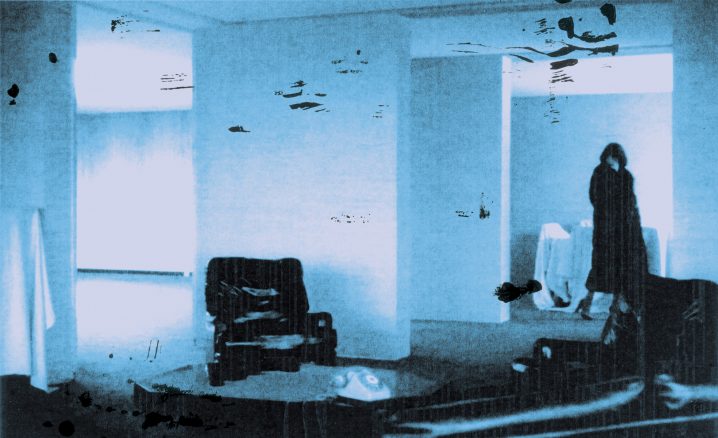 Hey Josh, where are you these days and what have you been up to lately?
Josh: I’m installing new hard drives in my computer, which took a shit on itself the other day. That, and collating everything Turk and I need to get ready for Berlin Atonal in August. There are other album projects that I wish I could tell you about that are happening right now, but that news will have to wait.

How did you guys meet?
Turk: Josh and I met through our mutual friend Charlie Cooper back in 1998. Charlie knew Josh from the both of them being in bands around the New Orleans area in the mid-90’s while in high school. Charlie and I at the time, 1998, were working on techno and primitive “experimental” electronic stuff together. We had just come off of playing a few shows in Atlanta which had Charlie super inspired and he mentioned Josh… he said that he really wanted to bring him around and get him involved in what we were doing. A month later Josh and Charlie had secretly made a track together which totally upped the game!

You’ve have already collaborated together as Benelli, what prompted for you to get together on this project?
Turk: I had been working on some tracks on my own and was having Josh help me finalize things once I got the tracks to 90- 95%. At some point Josh said, “I hope I’m not imposing here, but why don’t we just start fully collaborating on this stuff together… it just makes sense and we work well together”… within less than a year from that decision, not only did we had our gestalt moment in regards to concept, but we also finished the first album too.
Josh: Turk and I have made a ton of music together over the years, almost none of which has or will see the light of day, so we figured that the time was ripe to do something together and take it seriously enough to at least attempt at getting it released.

Can you tell us what the name Second Woman means and where it came from?
Turk: It has to do with different versions of self or perception.
Josh: Also, for me, it refers to our complete fear/fetishization of the “other” and “othering” with which our society is currently pregnant.

Any chance you can share the mystery behind the title tracks and what they represent?
Turk: That’s for you guys to figure out!

Was there a particular aesthetic (as it appears to sound) that you set out to explore on the album?
Turk: We had been working on music that was much more gridded and we both felt that we were becoming a slave to the grid… very inhibited by it. We made a conscious choice to ignore the grid and to distill the things that we had been inspired by to the barest of their bones. Those inspirations being time dilation and asmr, dub and footwork. When we did both of these things, ignoring the grid and distilling certain concepts that we had to their core, everything just started to click in a way that I haven’t experienced since making “October Language” over a decade ago.
Josh: Yeah, I think we were probably frustrated with making ersatz techno and realized the grid was a fucking prison for us if we were going to work together. I love gridded music and I love making it but for Turk and I together I just don’t see how it’s possible.

How would you describe this music yourself?
Turk: Contemporary music focused on engineering perceptual slips.

Can you talk a bit about the instruments and software used in the production and sequencing of sounds?
Turk: It’s entirely software at the moment. It was made inside of Ableton, but really only using Ableton as a recorder, and using the Push to control multiple parameters on instruments and effects… Doing live automation runs with the Push was the main composition and arrangement tool. Most of the processes on the record involved our bespoke Max4Live devices and sound generation from some Native Instruments stuff like Razor and Maschine.
Josh: Modulators modulating modulators which are also modulating other modulations…

How did you end up on Spectrum Spools?
Turk: I had been a fan of SS for a while. We really only had a few labels that we thought would be right for the project, and SS was at the top of our list …especially because of its American roots. I had some interaction with John Elliot a few years back on Twitter and knew that he was a fan. When we completed the record we emailed it to John and heard back from him less than hour later. It was just meant to be.

I am personally hoping this is just the beginning. What is the future of Second Woman?
Turk: We have an EP coming out later this year. And then our second full length for Spectrum Spools in the beginning of 2017