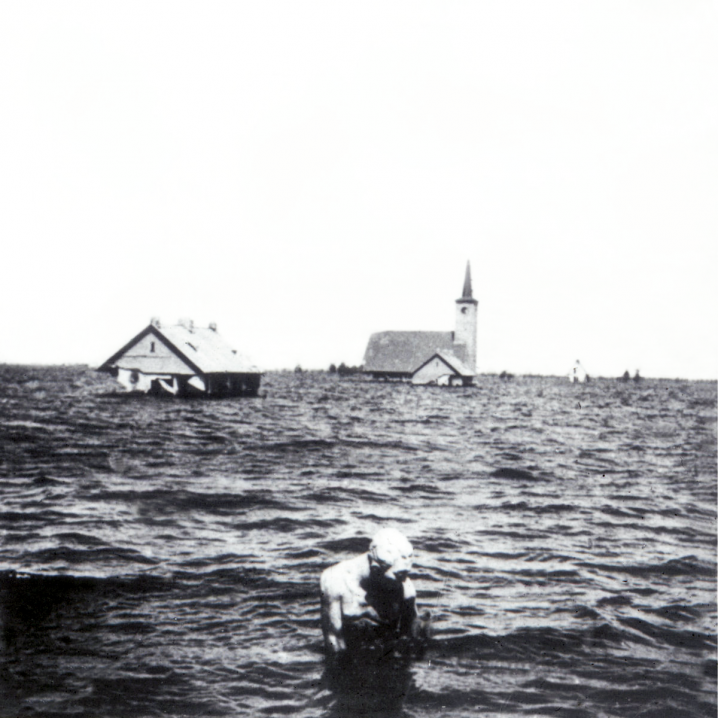 Lakker’s latest full-length veers even further from the dancefloor than their last, the utterly fantastic and impossible-to-recommend-enough Tundra (incidentally, also one of our favorites of that year). Right out of the gate, Struggle & Emerge presents itself as an industrialized concept album. And that it is; RE:VIVE Initiative commissioned this music as an interpretation of the relationship between the Dutch and the North Sea in all of its scale, tumult, volume, and awe [solely sampling field recordings, TV and radio broadcasts from the Dutch National AV archive of The Netherlands Institute for Sound and Vision].

The gaseous blasts of the opener “Reclamation” feel like triumphant trumpets of industry, the glory of man taming the sea with flood protection. This nod to heavy industry — literally — feels like an amped up variation on some of the themes of OMD’s Dazzle Ships. Of course, nothing on that particular album sounds as remotely caustic as the sputtering grind of “Maeslantering Gating,” but it shares much in its focus on industry as a by-product of, or causer of conflict.

In order to combat the catastrophic power of the sea Dutch engineering has needed to go to equal extremes. […] Lakker gained inspiration from archival footage of the closing of the 32km Afsluitdijk, a man made barrier protecting the Netherlands from the vicious North Sea, a first hand visits to the futuristic engineering marvel, Maeslantkering and the never ending challenge of keeping the sea at bay.

Struggle & Emerge recalls some of the industrial bite of recent works by Emptyset, but the physicality of its sounds feel distinctly Lakker, particularly that harsh, distorted ping pong ball of a snare. Some of their more out-there moments include the syncopated pink noise of “Broken Clouds,” lent an extra layer of ominousness via an archival recording of a broadcast after the Nazis’ inundization of Dutch polder Wieringermeer. “Ever Rising” denotes the inherent risk in living in such close proximity to a barely-tamed force of nature, complete with droning alarms and steady, reverberated clatter.

They pile on into a dizzy chorus that abruptly stops to provide only a short breath of air before the urgent mechanisms of “Fierljeppen,” denoting the Dutch national sport of pole vaulting over a body of water. The track bristles with activity, a fidgety precedent to “5,000 People.” One of many things I love about this body of work is that it both excels as a concept album and as a standalone, pure listening experience. In other words, its history and source material need not be known or understood fully to appreciate Lakker’s music, but more likely than not, I think listeners will be as compelled as I was to look up the context and meaning behind the music. Exceptionally good, another masterpiece from Lakker — highly recommended.