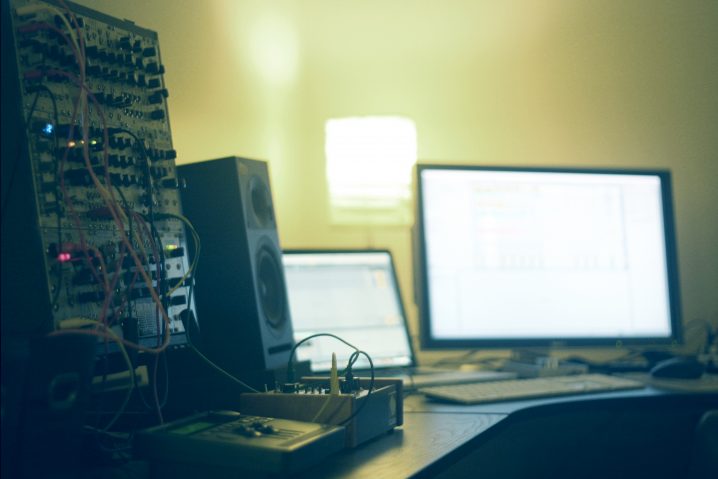 And we’re back with yet another entry in our new “In the studio with…” column. You guys seems to like these, noh? Today we’re featuring the working environment of Christopher Bissonnette, a Canadian sound artist with numerous releases on Kranky and a gorgeous piece with David Wenngren (of Library Tapes) on Home Normal. Bissonnette is also a founding member of Thinkbox, a media collective exploring sonic and visual art, from which eventually his solo work has spurred. His latest album on Kranky, Essays In Idleness, is a series of composition studies with focus on generative processes, textures, and fragments that modulate through a self-built analog synthesizer. I hope you will enjoy…

Lets start at the very beginning. Can you tell us how you got involved in composing, and what was your very first piece of gear?
My formative years in music began, as with most, in my early teens. I was an avid synth pop fan and I filled my ears with the likes of Depeche Mode, OMD and Pet Shop Boys amongst others. As I grew older, I branched out into more adventurous sounds that included industrial and experimental music. The warehouse scene was at its peak in Detroit at this time and I immersed myself in hardcore techno as well. All of these influences fueled my interest to compose. While in art school I began to experiment with audio as part of the multi-media program I was enrolled in. As my understanding of audio art evolved, I began to concentrate more and more on the sound component of my work. It was an accessible medium at the time and the results were immediate compared to working with video. I purchased my first piece of gear, a Yamaha TG-33, which I still own today. It was a fairly innovative synth for it’s time and it enabled me to produce much of my early experimentation. I quickly added a mixer, a drum machine and a couple of vintage analog keyboards, which were cheaper and readily available at the time.

How many different studio iterations have you gone through, and what does your final setup look like right now?
My studio has changed at least six or seven times over the course of twenty or so years. But in truth it seems to continually evolve through a process of expansion and contraction. I’m currently in a state of expansion as hardware has made a return into my process. My Macbook Pro is still the center of my studio set up, but it’s been getting less attention as of late as I spend more of my time building patches with the modular. In addition to the modular synth I have a handful of external processors and sound generators. Even though hardware has made a welcome return in my setup, it’s still important for me not to collect too many devices and disturb the simplicity of my studio. Too many choices can become paralyzing, for me anyway. 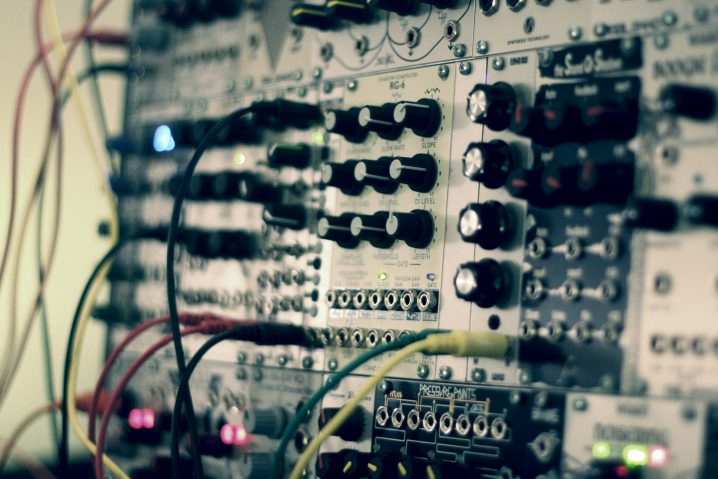 Tell us about your favorite piece of hardware.
My favourite piece of hardware has changed over time. A few years ago I bought a Jomox T-Resonator on an impulse. I had been listening to a lot of noise as well as older post-industrial work from the nineties. The T-Res seemed to satisfy my need for a more aggressive sound and to work with hardware again. I found a way to incorporate the unit in much of my work. It was a purchase that inspired spontaneity and introduced an element of risk I’d not found with my previous process. At present, I’m trying to integrate a new module into my modular system. It’s a random controlled voltage generator called the Turing Machine. I have an affinity for random sequence and note generation and this appeared to differ from a few of the other random modules I currently utilize.

And what about the software that you use for production?
I am a long time Audiomulch and Reaktor user. Those two programs, in addition to a handful of plug-ins, were the main source of production for me for quite a few years. I also use Logic for final composition and mix downs and Ableton Live 9 for performance. Over time I decided I wanted to focus on just a few flexible pieces of software. I’ve always toyed with the idea of getting into Max/MSP but ultimately I’m not really interested in that level of detail it offers. I prefer to have working tools and not spend too much time building from scratch. There are people who far better at it than I anyway and I feel my time is best spent creating sound. 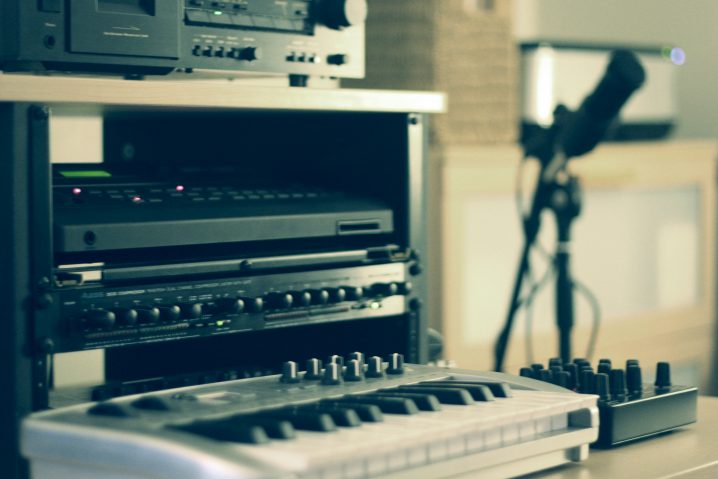 Is there a particular piece of gear that you’re just dying to get your hands on and do you think one day you’ll have it?
There is always something I feel like I want/need but I have to say that Kyma systems really intrigue me. I’ve worked in modular style software for years, so I feel like I could adapt to its way of operating fairly easily. Kyma systems tend to be expensive and there is almost always something I need for the studio or a more accessible piece of gear to attain. It feels like quite a commitment but I won’t rule out investing in one in the future.

I’ve never been on an extensive tour. I play live events from time to time but I’m rather inconsistent. My basic live set up consists of a laptop, controller, a small compact mixer, a few contact mic’d instruments and an external effects unit. I’ve considered constructing a small modular unit for performance but I haven’t reached that point just yet. Live patching feels a little too risky for me right now. So I can appreciate those who do perform with a modular system. 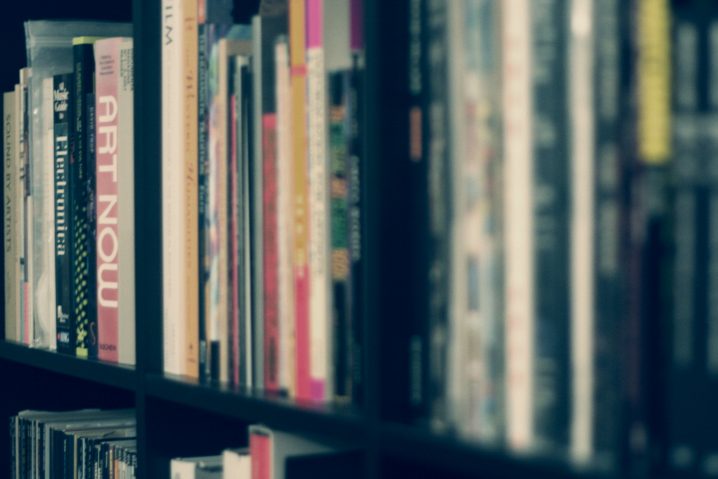 What is the most important environmental aspect of your current workspace and what would be a particular element that you would improve on?
I have always attempted to create a studio space that reflects simplicity. It’s not an easy task. Audio cables, patch cords, MIDI cables and gear can easily create clutter. I try to keep it down to the essentials. I don’t work well in a disorderly environment. Strangely, I would like to have a smaller workspace than I’m currently working in. I feel I could control the acoustics and immerse myself in the work if I was well isolated.

What can you tell us about your overall process of composition? How are the ideas born, where do they mature, and when do they finally see the light?
Many of my compositions are born from open-minded experimentation. I begin with a very loose idea. If I attempt to predict the results, it’s less likely that I will be satisfied with the final product. I tend to build tracks with one or two simple elements and expand on them. I often create a palette of sounds and ideas and then work them into a composition, trying not to dictate specifically how they interact. The element of chance plays an important role in my work. It keeps me engaged by discovering serendipitous moments when combining sounds together. 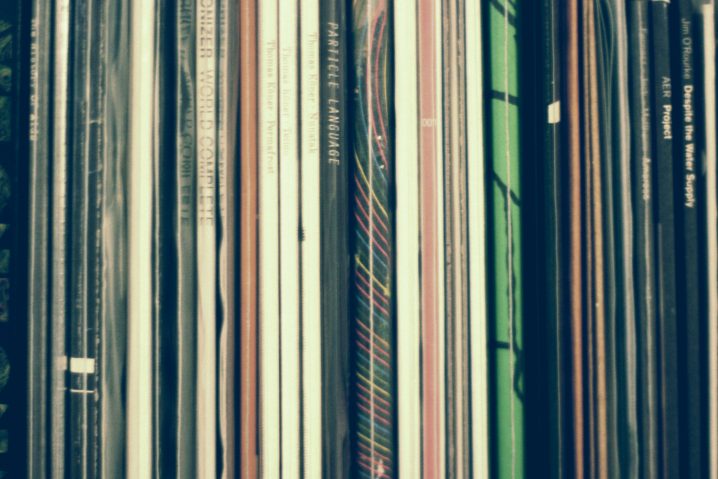 After the piece is complete, how do you audition the results? What are your reactions to hearing your music in a different context, setting, or a sound system?
It’s always difficult to recognize when a piece is complete. I may go back and reorganize, replace or eliminate elements of a track once I’ve listened to it in a different context. This means taking it in the car, listening on my phone or on a sound system other than in my studio. In studio I’m too in the moment, conscious of all the tactical decisions I’ve made to produce the track. It’s important for me to remove myself from that environment.

Do you ever procrastinate? If so, what do you usually find yourself doing during those times?
I’m not sure I procrastinate as much as I find myself distracted. There are far too many things I take interest in and very little time to visit them all. Balancing family, career and art is a complex endeavor, so it’s important for me to prioritize. If I do procrastinate it’s usually with the final step of a track’s production that involves a detailed mix and finalizing EQ. It’s an essential step but not as gratifying as the emergence of an idea.

For more, check out Headphone Commute review of In Between Words and a 2009 entry of Two and a Half Questions with Christopher Bissonnette. More to come!