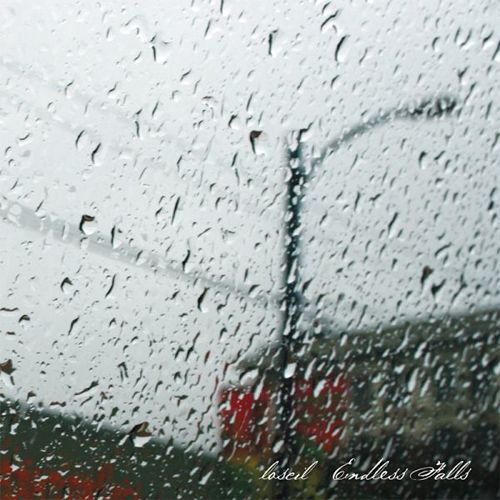 It begins and ends with rain. But when the waterfalls subside, a picturesque landscape reveals itself through haze and fog. Vast fields of textural sound unfold beneath the soaring heights, with a slight pulse of bass vibrations, originating from the unexplored depths, and an echoing muffled synth line, dying in the cavernous emptiness of this landscape. With a microscopic nod to dub, Loscil weaves sonic parachutes that lift up beyond the clouds and slowly coast down to earth, only to have it curve beneath them, in an endless fall.

Endless Falls is Scott Morgan’s fifth full length album on Chicago’s Kranky, not counting the digital freebie, Stases, released out by a net-label, One. Endless Falls also comes on the heels of Strathcona Variations digital EP, released by Ghostly International in October 2009. I was sure that the follow-up full length was going to be put out by Ghostly as well. But, alas, Morgan returns to Kranky, which has been the home for his last four albums, Triple Point (2001), Submers (2002), First Narrows (2004) and Plume (2006).

Since Plume, Morgan has been busy developing his ambient soundscapes, complimenting looped drones with subliminal melodies and modulated bass. The intricately designed dense textures wrap one’s unoccupied consciousness in melancholy, sadness and reflection. The mood fluctuates the listener from wakefulness to hypnotic dream states, crackling and clicking with stripped down rhythms and wet minor pads.

On the last nine minute piece, “The Making Of Grief Point“, Morgan features a long spoken word piece by Daniel Bejar (member of indie band, Destroyer, for which Morgan plays the drums and saxophone), delivered softly and deliberately, over a pulsing tone and walking synth notes through an unresolved chord. This is the first time Loscil brings vocals of any kind into his work. About this choice, Scott Morgan states:

“The collaboration with Dan made us both incredibly nervous. Dan felt out of his element doing ‘spoken word’ but rose to the challenge. I felt self-conscious about changing the listening perspective from abstract, ambient music into foreground, conscious listening. The first time I heard Dan’s voice recording I was terrified and was tempted to call the whole thing off. I listened to it a few more times and it completely grew on me. Now I can’t imagine that piece without his performance. I love Dan’s use of words, his vocal rhythms and the intimate intensity of his voice.”

Additional collaborators on the album include the return of Jason Zumpano on piano, Kim Koch on strings and Robert Sparks on bass recorder. Scott’s four year old daughter, Sadie, is responsible for providing the cover art for the album, taken from the backseat of the family car. Check out an interview with the photographer on Loscil’s Blog. Endless Falls is incredibly gorgeous, sublime and subtle yet precise. Recommended for fans of Pole and Gas, as well as Stars of the Lid, Christopher Bissonnette and Tim Hecker. “The answer to the making of grief point is picnic baskets filled with blood.”

See also Two and a Half Questions with Loscil