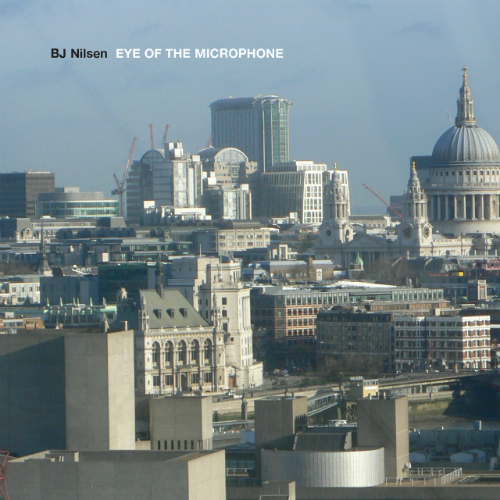 I first heard BJ Nilsen’s music as Morthound, a deadly serious ambient project that was an early highlight of Sweden’s death-ambient Cold Meat Industry label in the early 90s. Nilsen was only a teenager when he worked on those albums, followed by a more sublime, less horror-tinged minimal drone project, Hazard. Since working under his own name, I haven’t kept up much with Nilsen’s output (his solo releases put out mostly by Touch), and the Eye of the Microphone seems as good a place as any to start.

There is still an emphasis on environment, but rather than the desolate dronescapes of Hazard, Eye of the Microphone falls closer in line with Chris Watson’s hyperrealism field recordings, letting his microphone document his travels through England. “A city without sound does not exist,” writes Nilsen in the press release for the album. His goal was to tirelessly document its streets, sights, and sounds using his reliable microphone, with no real emphasis on route or destination. Rather, Nilsen aims to simply log the aural experience of his surroundings, wherever they may take him. As a result, the three pieces on Eye of the Microphone vary, though they have that unifying tactical thread.

“Sound composition can alter space and time and transform a specific location and experience into an imaginary world.”

My favorite track might be the first one. “Londonium” consists largely of ambient street sounds, the mundane drone of everyday urban life. That I first really listened to this album while out and about walking on the street greatly enhanced the experience. Nilsen juxtaposes the drones of modern living — river boats, a far-off chainsaw — with natural sounds of the Thames and Canary Wharf. It ends with a disorienting blitz of manipulated sound before proceeding into the other tracks. On second track “Coins and Bones,” Nilsen blends field recordings with more manipulated, tense drones, evolving the music into something much greater a role than composite observer.

The third and final piece, “Twenty Four Seven,” features the amplified sounds of natural wildlife as the key elements. “A microphone is both a lark and a night owl,” writes Nilsen. In this final piece, urban life resounds faintly in the distance, and his high-pitched drones add an otherworldliness to the otherwise quite earthly sounds of his recordings. Like his labelmate Watson, Nilsen’s interest in the tiny sounds of natural and urban life shines through these startlingly clear recordings and assemblages. It’s an engaging document of particular places at particular times in which found and created sounds intertwine in ways that complement and enhance one another.