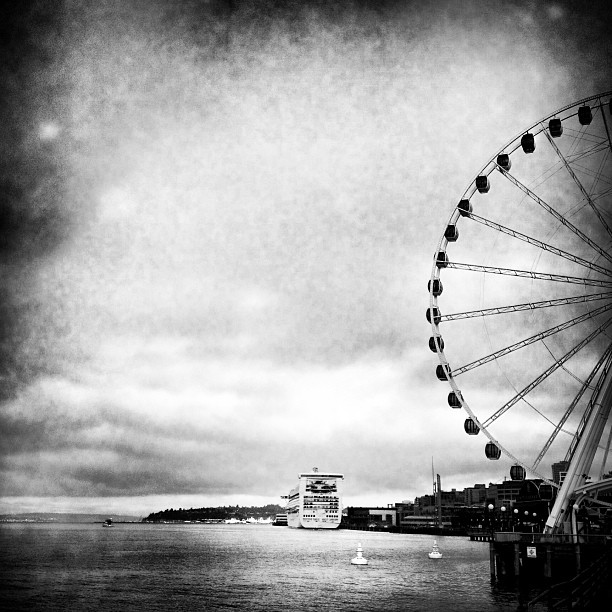 It’s five o’clock on a Monday night. I peel off my cold and wet jeans and collapse on top of my hotel bed. This morning I woke up with that jet-lagged headache that came on slow with that chilling wind and that sideways rain, and even Starbucks was slightly disheartened. And now, eight hours later, exhausted from walking around Seattle, doing that obligatory touristy thing, visiting the Pike Place Market, EMP Museum and Bill Spiedel’s Underground Tour, and in the process acquiring my first “50 Floors in a Day Award” from my fitbit, I’m starting to think about the upcoming festival. It’s only five o’clock on a Monday night, and in just a few days at about this time, my day will be only beginning, with an Opening Gala at the Chihuly Garden and Glass gallery, and a night full of first wave of performers.

And does Seattle even know that Decibel is about to descend upon its autumn ears?

My first glorious encounter of the week occurs the next day, on a Tuesday. Indeed, as you may have guessed by now, I arrived to Seattle a few days prior to the festival, to ease into my musical vacation before a five-day sonic onslaught. After another long day of running around, I come upon an intersection, across the street from my hotel, and notice a peculiar gentleman leaving his taxi. He has two Chihuahuas on a leash, and it is perhaps the two little creatures that I notice at first, darting in and out of the street. I stop to pet them and ask for their names.

Cash Money and Lucky Cassius lick my fingers, and after zoning in on the owner’s painted toenails I finally look up for further small talk. We cross the street, and taking a shot in the dark I ask if he’s a musician. He’s not, but he does own a hip-hop label in Austin, Texas, and he’s here in town to sign some more upcoming acts. I wasn’t that far off. I tell him that I’m visiting Seattle to cover Decibel, and a few minutes later we stand on the corner of a busy street, his gold chains swinging from his tan and aged neck, rapping along to a recently recorded gangsta track, booming LOUD from a portable bluetooth speaker. And I mean it was loud!

Stay tuned for an in-depth coverage of Decibel Festival…