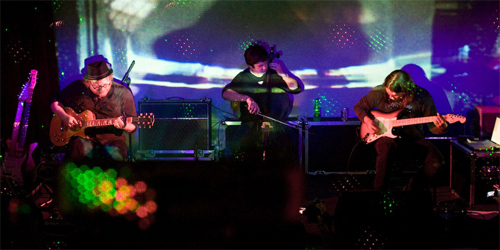 Editors’s Note : All answers are by Andrew Thompson (AT) and Marc Byrd (MB)

So first of all, a double disk album? Wow! I know it’s been two years since The Longest Year, but how did you manage to compile so much amazing material?

MB—Well it took a long time. The music for the most part came about fairly easy but the editing process was painful, really difficult. We have A LOT more pieces left over. We were thinking, “We’re going to have to get this down to twelve tracks” and then that just became impossible for us to do on our own. We sent the potential 18 tracks to timEbandit Powles (Tim from the band, The Church.) He was set to be the mixing engineer and he has a nice producer’s ear. He listened to all of the songs and we expected there would be some brutal comments but instead, he insisted that each of these pieces should have a home together. He didn’t make any more money for mixing the extra pieces, he just sincerely liked all the music and that each track seemed to be cut from the same cloth. As mixing went on (long process) we created the piece “Cold Front.” I insisted that this be the opener, it just had to be… That tends to happen with us. “The Air Between Us” was the last piece we wrote for Kenotic. It happens… So the album got even longer before it was all said and done.

There was a four-track EP in 2011, Asleep In The Downlights, where you tried a bit something different. Tell us about that.

AT—We’ve been longtime fans of the Australian band, The Church. timEbandit mixed our last full length, “Chasing After Shadows… Living With the Ghosts.” We really bonded during that time and he suggested that Steve Kilbey (lead singer of The Church) sing on one of our tracks. Kilbey came in and wrote a lyric on the spot and went into sing. When he heard the track he asked Tim, “Why doesn’t the Church write ambient music like this?” He loved the music. We released the instrumental version on the “Chasing Outtakes EP.” We decided “Asleep In the Downlights” should have a different vocalist on each song. Kilbey is on the first track, I’m on the second track… singing my first vocal for Hammock, timEbandit sings on the third and Marc sings on the fourth. It was a labor of love for all and an honor for us to work with those guys.

And how did you come about incorporating Christy’s vocals on the new album?

MB—Well Christy has sung on all of our records except for three. She’s featured on “Ten Thousand Years Won’t Save Your Life,” “Awakened, He Heard Only Silence,” “Dark Circles,” “Mute Angels,” “Hiding But Nobody Missed You” and “Tornado Warning.” Sometimes we’ll already have something written for her to sing like “Ten Thousand Years” or “Hiding.” Most of the time she improvises and we just let her go—maybe give “some” direction, get a few takes and assemble it together. She’s brilliant at that kind of thing. She’s our secret weapon and also my wife. It’s confusing for some because they hear me sing in my falsetto and they think it’s her. “(Let’s Kiss) While All the Stars Are Falling Down,” “Words You Said… I’ll Never Forget You Now,” and “You Lost the Starlight In Your Eyes” are all examples of this.

Departure Songs has a strong theme of death, departure, and loss. But there’s an element of hope in every single track. What particular aesthetic did you attempt to capture with this release?

MB—Yes it does. In May of 2010 my house was flooded and we lost our entire first floor as well as some other things. Before that my stepfather suddenly died and before that a friend who had done some scoring work with us also suddenly died, all within a few months of each other. I think that all of this happening in such a compressed period of time made us more acutely aware of the fleeting nature of life. The “Longest Year” EP was a summation of just feeling overwhelmed by it all. “Departure Songs” is an attempt to unpack all of it, an attempt of accepting the finite nature of life. I don’t think it’s completely dark though. There is a real sense of triumph as well. Temporary triumph but triumph nonetheless… I personally have a hard time being around super happy, positive people but I also can’t stand to be in the company of the needlessly negative either. This is our attempt to take the middle path of balance between the dark and the light.

AT—We purposefully went for a much bigger and more expansive sound on “Departure Songs” and ended up with just that. We consciously went down this road sonically and ended up marrying the “BIG” themes with big sounds.

I’m sure you know that I’m a big fan of Keith Kenniff – how did you guys connect and get him to contribute piano of the first four tracks?

MB—Keith is actually only on the fourth track, “Artificial Paradises.” We’ve never met face to face but I guess it started when we were asked to do a remix for him (hasn’t been released yet.) Then we were asked to contribute a song to “For Nihon.” A record that he and his wife, Hollie, put together for charity in response to the 2011 earthquake/tsunami in Japan. We’re also fans of Hollie and Keith’s band, Mint Julep. Hollie and I had corresponded some. So things just became more comfortable and mutually respectful so we asked Keith to contribute and he didn’t hesitate to say yes. It turned out amazing. We’ve released a set of commentary discs that come with the Departure Songs deluxe package. You can hear ALL of Keith’s tracks soloed and isolated. He contributed, texture, piano, keys, drums and percussion… Perfect!

Another thing I always wanted to know: You seem to be confined to releasing material on your own label (and Darla). Is there a particular reason you’re keeping it pretty independent?

AT—Considering the state of the music industry right now it would have to be a really great deal with almost complete artistic freedom. As it stands we can release how much or how little music that we want, when we want. This allows us to be able to work on material over a long period of time, giving us enough space to experiment and time to allow the best songs rise to the top of the mountain of material that we inevitably write.

Will we finally see you guys on tour? Perhaps a live performance in New York?

AT—We’re furiously working in the studio right now. There will probably be some live dates brewing sometime next year.

And I hear that you’re already working on the next album? Care to give us a little hint about your new work?

MB—We are. Actually we just finished a new piece before we started this interview. There’s a ticket that comes with the “Departure Songs” artwork that ties directly with our next release. We’ll be taking the next one in a completely different direction from “Departure Songs.” We’ve been planning this for quite a long time. We’re calling this one our “Maybe They Will Sing For Us Tomorrow” on steroids. The only drum on the next release is one lonely timpani. Oh so lonely…

Be sure to read Headphone Commute review of Departure Songs