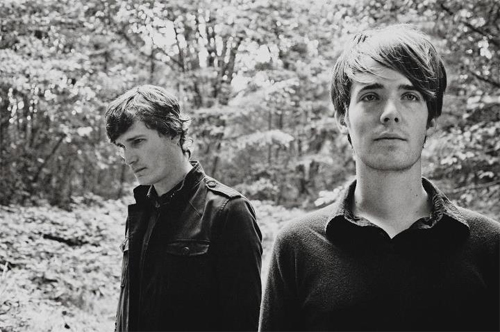 Hey Tom, how is it going? Doing a lot of rehearsing for your performance at Decibel, I reckon?
“It” – as in, the general state of things – is great, I’m pleased to say… and yes, there’s been a decent bit of work put into our set for Benaroya, revisiting familiar things, reworking them and adding new pieces to the set. After the handful of shows we did in Europe this summer it feels like a nice, natural movement.

So I wanted to start at the beginning. How did you first meet Rafael?
As a curator for Decibel Festival he booked me for one of the audiovisual showcases in 2009, where we crossed paths and struck up a conversation… Somewhere in the months following, I was invited up to Seattle from Portland to do some non-specific kind of collaboration at his studio – very much a low-pressure, let’s-see-what-happens kind of thing. I think we admired each other’s aesthetics enough that there was a feeling of promise in the idea of working together… It could’ve gone worse.

And what prompted you two to form Orcas?
Like I said, each of us was a fan of the other’s work… and despite sharing certain similarities I think our respective styles are different enough to suggest something dynamic and complementary – like, we each bring a different set of ideas and experiences to the table so there are lots of possible permutations, especially when beginning with improvisation and a lack of well-defined goals.

Going to Morr was an interesting move for you two. How did you settle on the label?
We’ve both been fans of their output for the decade-plus that they’ve been around… I remember discovering Manual, Populous, Lali Puna, etc, when I was in high school and at university – and somewhere along the way I found out that Thomas (Mr. Morr) was a fan of my Benoît Pioulard albums, I think because of a Boomkat year-end best-of list feature, if that matters… Once the first LP with Rafael was wrapping up it felt different enough for both us to consider a totally new label relationship, and when we discussed it Morr ended up at the top of the heap – lucky for us, they were interested.

I’m absolutely in love with your cover of Broadcast’s “Until Then”. What prompted you to record this piece and eventually include on the album?
One of our recording sessions in January 2011 began immediately after the news broke that Trish Keenan [vocalist/guitarist for Broadcast] had suddenly passed away, which shocked both of us to say the least. There wasn’t even a second thought that we had to make a tribute of some kind, the only discussion was about which song it would be… Once we settled on ‘Until Then’ we spent two or three long days in the studio getting the song to a place we felt was appropriate, and then released it the following week online. As for inclusion on the album, Rafael just wanted to hear it on vinyl initially, but it also ended up fitting nicely into the flow of everything else we’d recorded.

Who writes all of the lyrics for Orcas?
I wrote & sang all of them, but there are also a couple of non-lyrical vocal contributions on the album from our friend Jesy, who goes by the name Tiny Vipers and is also half of Mirrorring.

The songs on the album bridge the gap between ambiance and lyricism. What is the balance between instrumental accompaniment and the vocals which you try to achieve?
There were no conscious goals that I can speak of, but I’d say our ultimate aim was to have every element seem to be in its place… You know, nothing gratuitous or overwrought. I think we both adhere to some form of restraint in our aesthetics, while still trying to create something that sounds full.

What have you been working on lately?
I just finished a new album for kranky that ought to be out in the first quarter of 2013, and am also working long-distance on a slew of pieces with my friend Kyle Bobby Dunn, which are turning out really nicely so far.

Be sure to read Headphone Commute’s review of Orcas