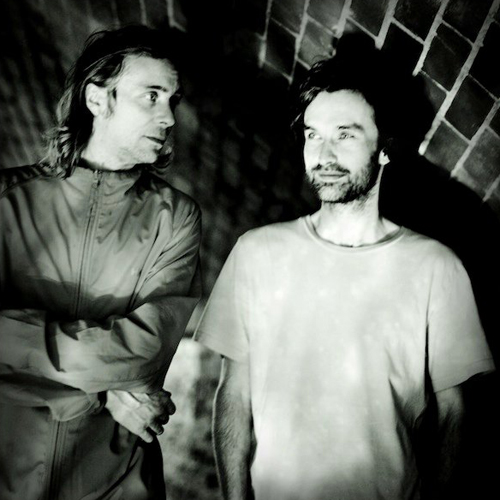 Hey Miles… where are you right now, and what have you been working on lately?
In Berlin at the moment, where I recently moved. Working on a bunch of things, some new Demdike Stare material, as we finally conjured up the directions we want to move toward after some months of research and experimenting. Also working on various solo projects, the Suum Cuique and Miles monikers should have some movement in the coming months. We’re also working toward some exclusive shows later in the year under the Demdike Stare and Slant Azymuth projects, we have some big plans for Poland’s Unsound festival which will take a lot of research and rehearsal to get right.

When I last met you at Mutek you spoke with excitement about record digging at some obscure flea market. Describe your latest found treasures.
It’s a tad difficult without giving too much away of what we’re looking for at the moment, but we’ve recently moved more toward avant-garde classical recordings, and unheard early electronic records. There’s also been some amazing jazz records we’ve discovered while on tour in the States, though as a genre it’s an acquired taste, and most people probably wouldn’t link Demdike Stare to jazz, if it wasn’t for the mixes we release, but believe me when I say we’re heavily influenced by a lot of jazz.

I’m not going to ask you to reveal your secrets behind the process, but what is the overall aesthetic that Demdike Stare strives to achieve?
Mood and atmosphere is all we try and create, the music is almost a by-product of us striving to achieve this. I think no matter what you say about the process, it’s very difficult for anyone to understand how or what you do without having the same context. As Sean and I are from different worlds of music, it’s the blurring of the lines between our two worlds that makes the music happen. There are a lot of areas where we are similarly leaning, but then there are areas in music that each of us has solely, and we probably will never cross over into. The places where we do cross over, are of course the lines of the project. It’s a process of hybridisation more than any pre-emptive plan that makes us tick. We actually have no idea what we’re doing, and I think that naivety is part of the success.

What are your thoughts of composing a soundtrack for a film? And what kind of a film would it be?
We already have, and it’s (kind of cliche) a vampire movie. Originally we started to write music for a non-existent movie, that’s where Symbiosis came from, those sketches were intended for a non-existent film.

I love describing and slotting your music into ‘hauntology’ category. Tell us of what you think of music classification and bending the predefined genres.
Bending and blurring genres is what it should be about, but categorising is not often a good thing for music, as the artists themselves are then put into pre-defining areas, and almost boxed off from being free within the spectrum of music. Demdike Stare is an open ended project to us, we can go anywhere and do anything, we consider some of the music we write as light, (mathilda’s dream, repository of light, etc) and some as dark, though more often than not we’re judged to be a dark and gloomy outfit, which is far away from our actual outlook and character. Hence we try not to think of ourselves as classifiable in any way other than just electronic. Hauntology, simply because of the ghostly reference in the name is probably a highly misunderstood word within music. It’s meant in the Derrida sense of referencing archival material, or triggering historical or psychological memories, and not meant as a gloomy, or horror inspired term in any way, though i think it’s now acquired that meaning.

Another curious question for you – what prompted a decision to release slightly altered material between the vinyl and the CD of Elemental?
There are a number of reasons, but mainly we want each release to be different, most vinyl buyers don’t buy CDs if the music is available on vinyl, and vice versa, so why not give each area something different, more special. It’s also good to design music around formats in a subtle way, to play with the form, like altering the running order, or the technical aspects of the format can dictate what you can do within them. Locked grooves for vinyl, or hidden tracks on CDs, etc. Often we also have different versions of tracks, as they’re generally recorded ad lib, and not built up over time, so we’ll sometimes make one or two versions, in case we’re not happy with one or the other. If they’re both good, then why not release them? Though not on the same release, that’s kind of boring!

I must applaud you – your vinyl sold out incredibly fast, even at my local record store! What are your thoughts on the impact your sounds make on the music scene?
Yes, it sold rather fast, and took us by surprise, it’s always good to sell out than have copies lying around. Though being honest it was a logistical and economic nightmare making the last record, and will maybe be the last time we attempt to create an artifact of such scope. Repressing it under the current format is probably not possibile, though we may well re-issue Elemental as another vinyl format, we’ll see.

What’s next for Demdike Stare?
Now that’s the big question we’ve been wrestling with for a few months. We’re now coming to the end of touring a lot for this year, so that should well be answered in the coming months. There are a couple of things already in the pipeline, though they’re special little projects being released for events, so sadly we can’t spoil the surprise, but watch this space!