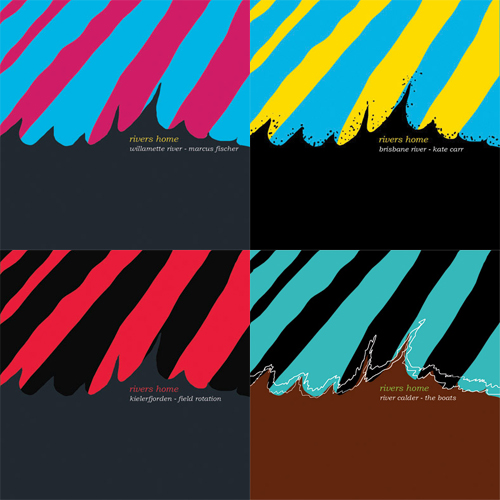 After almost two weeks of going out for the Unsound Festival and a few performances by Nils Frahm, Ryuichi Sakamoto and Taylor Deupree, I feel a bit overwhelmed, worn out and tired. Thankfully the weekend is here, and so I can settle comfortably in my studio chair to catch up to the latest releases and share some of my favorites with you. On the rotation today is a set of ten three-inch CDr releases from a small Australian independent label, Flaming Pines. The Rivers Home series began with an initial installment of five EPs released in September of 2011, and concluded with another set of five, published this past March. The series is dedicated to the rivers of the world, celebrating with the music inspired by the flow of water from a variety of ambient, drone, and minimalist musicians.

As our environment continues to change, rivers represent some of our most vulnerable eco-systems with urban runoff, over fishing, changing rain patterns and the clearing of river banks just some of the challenges to river systems worldwide.

The compilation of miniature hand-crafted gems opens up with a twenty minute meditation on Willamette River by the one and only Marcus Fischer. On the piece, Fischer gently strums over the ambient soundscapes, echoing some of his best work previously appearing on the beloved 12k. The delicate composition follows the path of Willamette river through Fischer’s native Portland (Oregon, USA), and explores abstract minimalism and organic ambient textures of water and sound.

The label founder and visionary behind the project, Kate Carr, appears on the third disk with a dedication to Brisbane River, flowing through the Queensland in Australia. Field recordings of gurgling waters and washes of guitar pads reflect on the transformation of the river in January of 2011, when the river flooded its banks, disabling entire communities of Brisbane, and shutting down the city for several days. The unprecedented power of water appears in this miniature composition as melancholy guitar chords strum through the running ripples and churning tide.

Christoph Berg contributes to the project under his Field Rotation moniker, with a ten minute piece on Kielerfjorden, a river near his home town of Kiel, Germany. Subdued filter sweeps, rhythmic sounds of shipyard, and synthetic chirping encompass this farewell piece to Berg’s childhood. The music captures the grey dullness of the daily life, with its cold air, scent of the Baltic sea, and “oppressive colour, bringing nothing but rain and storm.” The composition is a somber tribute to the environment most likely responsible for shaping Berg’s aural perceptions – and for that we thank Kiel Fjord.

The second half of the series opens with Seth Chrisman‘s piece on Rio Grande. Hailing out of New Mexico, USA, Chrisman (aka Widesky) recorded the sounds of the mighty river using a hydrophone. The thirteen minute exploration of the river’s 2,000 mile course drones with deep vibrations, field recordings of birds, and delicate burbling of the water. The music is broody, steady and calm, covering vast spaces of audible climates. Besides the Rio Grande piece, Chrisman managed to release another mini EP on Flaming Pines, titled Aetherdrift, Do You Copy? Be sure to also check out  Within That Aura out on Futuresequence.

A celebration of the River Calder appears on the compilation courtesy of The Boats. The river runs through Andrew Hargreaves’ home town in Burnley, UK. The piece recalls a vague flashback on a near-death experience from Hargreaves’ childhood. “My grandfather was showing me how to build a dam at one of the overflow tunnels that leaf off from the river […] I began to explore the far end of the tunnel […] The next thing I remember is flowing like a poohstick down the Calder […] A stranger dived in and rescued me and returned me to my grandparents.” This is an emotional piece that is just as pungent as its story.

Besides the five contributions covered above, the series also features releases from Broken Chip, Billy Gomberg, All N4tural, Dan Whiting and Savaran. Each copy in this limited run of 100 CDs comes in a numbered handmade sleeve, with an insert containing a personal message from the artist (from which I quoted some of the above words). The entire set has been mastered by 12k, and is a beautifully crafted compilation for connoisseurs and collectors alike. It’s no wonder that Flaming Pines has been featured as one of the Best New Labels of 2011 on Headphone Commute. Highly recommended!