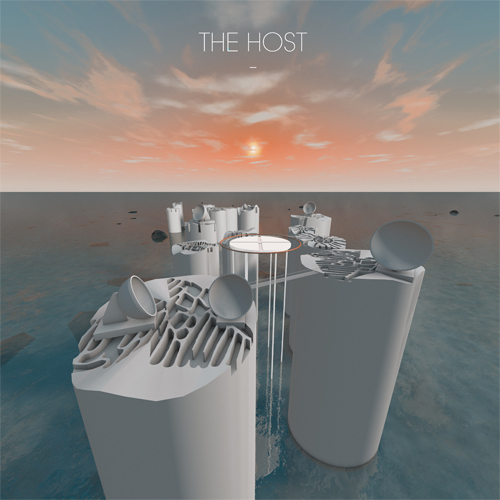 At first I thought that The Host was going to be another mysterious artist hiding behind an anonymous moniker to generate curiosity and buzz. Thankfully we can all avoid that anxiety and instead celebrate this new project, because The Host is none other than Barry Lynn, also know for his Boxcutter alias on Planet Mu. So why the new name? The self-titled album is indeed different from Lynn’s previous output, it doesn’t really bear much resemblance from the famous Boxcutter sound that we’ve all grown to love. So it only makes sense to create another alter ego for this Northern Ireland musician. For more, read our Interview with The Host.

Two of the most interesting elements on The Host become instantly clear: first, there’s the never-ending wide-stretch of Planet Mu’s influence with the footwork style rhythms prominent throughout the album; and second, the unmistakable acoustic guitar and bass presence that manages to wrap the album into a warm and fuzzy organic motif. Lo-fi recording techniques of hissing tape and buzzing amps add a touch of 70’s psychedelic studio feel, spacey synths and all, to create an atmosphere of this futuristic past, first introduced by Africa HiTech, then slightly echoed by Machinedrum.

[Barry Lynn] creates a unique suite of modern impressionistic sonics that tumble and waft in and out of the mix, earthed with strong melodies that take inspiration from net-age genres while never recalling them directly. Throughout, he masters all the potentials of vintage synths, drum machines and reverb, along with guitar and bass to explore a sound that sets him apart from producers working on computers, creating something much more band-like but rich with lively micro-detail.

Hearing Lynn playing the guitar finally reveals his true musicianship, previously masked behind the laptop and knobs. It gives me that same type of appreciation as when I first learned of Squarepusher‘s bass skills. I suppose it shouldn’t be a surprise that one of my favorite artist’s can actually play an instrument (I’m referring here back to Barry Lynn), but in this day and age of bedroom studios and free VST plugins, it’s too easy to get lost in the constant torrent of internet’s output, and the lack of genuine quality that often accompanies the result. Lynn proves otherwise, delivering a cohesive album worthy of multiple listens and in-depth exploration.

On The Host, Barry Lynn demonstrates a variety of styles, juggling abstract trip-hop, leftfield ambiance, UK garage and even experimental funk. So prepare yourself for a full on listening experience. Be sure to check out Lynn’s 2008 release under his real name, Balancing Lakes, as well as a suite of his albums under the Boxcutter moniker: Oneiric (2006), Glyphic (2007), Arecibo Message (2009), and The Dissolve (2011), all released by Planet Mu.

Don’t forget to check out our Interview with The Host