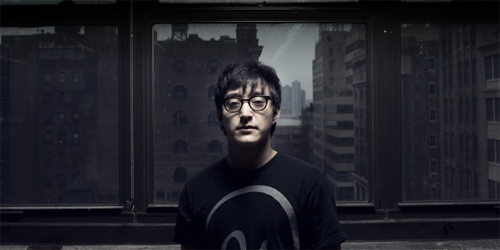 Hey Zach, what are you up to these days?
At the moment I’m doing a lot of performing and traveling. I just returned from a small west coast tour and I’ll be headed down to SXSW this year as well as another West coast tour at the end of March. I’ll also be headed over to the UK and EU in mid April. Besides that, just writing new songs, doing a couple remixes and thinking about starting some new projects in the future.

So talk a little about your musical journey – from education in jazz to ending up on Ghostly – how has it been?
My parents bought me a small drum set when I was three. I couldn’t play a thing on it then. When I was about ten, I brought it out of the closet and somehow could play. I spent my middle school/high school days playing music in all sorts of bands from rock to hip hop to jazz. I was self taught my whole life until I attended The New School of Jazz in New York, but I only lasted about three semesters. I continued to play, obviously, in several projects in New York and London, where I moved soon after. In London, I discovered my love for producing music. I had started due to the fact drumming had given my chronic tendonitus in both my forearms. Once I started though, I couldn’t stop. It was so much fun. When I moved back to the U.S. I got signed to a small label called Moodgadget which was founded in Ann Arbor, MI. It basically just escalated from there. I’m grateful for how things turned out.

Lineage is an album that references your ancestry — tell us about preserving your history through music.
Including my ancestry in my music is my way of letting my family know how much they effect me and how much I care about them. It’s easier for me to do it this way than in words.

Do you look at your personal past with nostalgia, celebration, or simply as neutral events that happened to another you?
Maybe a bit of everything. I definitely look at it as a friendly reminder of how good I have it.

Where did you get those photographs, and how did you decide to feature them as album cover art?
The photos were my grandmother’s. Mike Cina (he designed the artwork) suggested finding some personal photos that represented my “lineage” or some feeling I was trying to show and I had my mother pick them out.

It’s easy to assume that you play all of the drums on your album – what about the rest of the sounds? Describe your production process…
Every instrument you hear on Lineage is my own playing with one exception (the harp on “Soaring”). Even the singing on “Please Stay.” My main instrument is drums, but I can dabble in most things you pluck or strike, strum etc. Haha. The process for Lineage was basically me just playing takes of each instrument live. Whether it was Rhodes, xylophone, dulcimer, kalimba, etc., I was just recording through out the whole track and then editing where it was needed. I wanted it to sound more organic and feel more live. I used instruments I felt would sound nice together and stuck with them for every track. I felt it created a nice cohesiveness throughout the album.

If you could collaborate on an album with your dream artist (dead or alive) – who would it be, and what would it sound like?
Such a incredibly hard question to answer. I’d love to collaborate with D’Angelo. Maybe start an industrial R&B group.