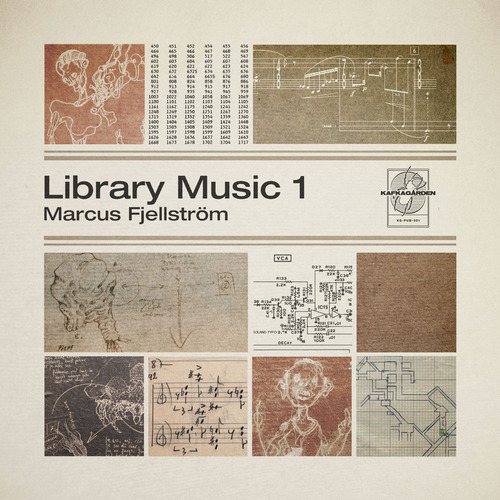 Marcus Fjellström first appeared on my radar after his 2010 release on Miasmah, titled Schattenspieler. His dark, moody and always beautiful passages quickly captured my attention and remained at the top of my rotation queue. Appropriately, Schattenspieler appeared on Headphone Commute’s Best of 2010 : Music For The Film Behind Closed Eyelids. Needless to say that I was pretty excited when I received a personalized copy of his latest, self-released album, Library Music 1.

Inspired by “the classic old music libraries used for TV and low budget movie productions in the 1960’s and 1970’s, as well as the curious early electronic experiments of Raymond Scott and the BBC Radiophonic Workshop,” Fjellström created 18 short vignettes covering a range of of experimental electronic and home listening genres. The pieces are short for a reason – their fragmented nature draws an image of a ripped patches of musical cloth that are then stitched back together at irregular angles, shaping a colorful sonic blanket for a cold winter night. Taken in as one cohesive project, the album becomes a score for an obscure vintage film – carnival memories, circus dreams, and cinematic fantasies are all collected in this library of hazy, deliciously dissonant, and ghost friendly loops.

At times a little gray and eerie, the music cuts through dusty grooves of gritty recordings, like a soundtrack to a surreal life kidnapped by an eavesdropping composer. Perfect for your own “Malice in Wonderland” head trip. Make sure you pick up Fjellström’s earlier releases, including above mentioned Schattenspieler as well as Gebrauchsmusik, released by Lampse in 2006. Library Music 1 is available from Fjellström’s own Kafkagarden. Based on a hint from the album title, let’s hope there is a volume two in the works!

Read Two and a Half Questions with Marcus Fjellström