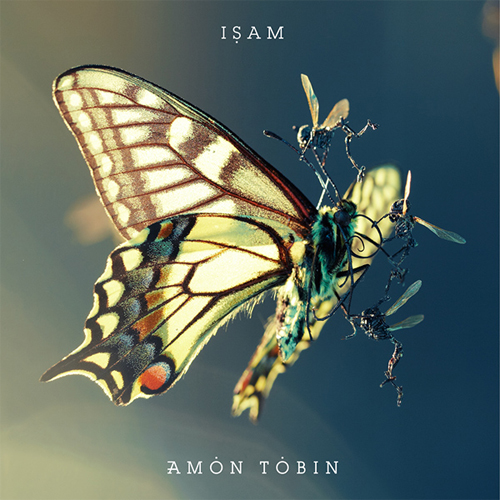 Listening to Amon Tobin’s latest album requires preparation. You can’t just throw on the record in the background and expect it to woo you. It requires a certain setting, a certain mood, a focused attention and an acute sense of perception. ISAM is a new full length release from Tobin since his 2007 Foley Room. And since it took him over four years to produce his most intricate and intense work to date, I can certainly take an hour of my time to fully absorb it. Actually, let’s make that an entire day. ISAM is more than an album. Subtitled “Control Over Nature” it is a also collaboration with Saatchi Collection artist Tessa Farmer, which extends into an installation, an audio/visual show, an artbook, a film, and a collection of stunning photography. So where do I start?

At the center of the album, whether through visual or auditory means, we are confronted with recurring themes of “sensory deprivation, disorienting situationism and the mechanisation of natural things”. The latter is accentuated with Farmer’s occult sculptures, constructed from organic elements, and pieces of roots, dead insects, and bits of bones. Working together on this concept, Tobin and Farmer are both “re-arranging and augmenting natural elements to make something imagined but tangible”. The main focus of Farmer’s installations are insects, devouring decomposing flesh, while controlled by supernatural fairy-like skeletal creatures. In the same sense, Tobin’s compositions are constructed from a wide range of organic source material, seamlessly incorporating field recordings with complex sound synthesis, incredibly sophisticated sound production and warping skeletal structure of the rhythm. Together, these images and sounds are archived in a special 10×7″ black cloth hardback artbook, featuring photography by Pelle Crepin. A deeper exploration on this work is featured in the form of an essay by John Doran (founder of Quietus).

To fully appreciate Amon Tobin’s achievement with ISAM, one must quickly traverse his musical career. Let me help you with that. Amon Adonai Santos de Araújo Tobin was born in Rio de Janeiro, Brazil. Traveling with his family around Europe, Tobin eventually settled in Brighton, England and began producing tracks with a sampler and a 4-track. His debut Adventures in Foam was released under the Cujo moniker on Ninebar Records. In 1997, Tobin finally landed on Ninja Tune with his critically acclaimed Bricolage. Although still mostly sample based, the album had a heavier jazz influence and more complex drum patterns. For his third album, Permutation (1998), Tobin continued working with mutated rhythms and loops, establishing his own instantly recognizable style. This genre-defining approach finally reached commercial appeal with Supermodified (2000). At this point, Tobin was already focused on turning familiar sounds inside out, obsessed with modification of original source beyond all recognition.

In 2002, Moving closer to Ninja Tune’s North American Headquarters, Tobin found himself surrounded by the industrial area of Montreal, Canada. Finally working out of a professional studio, Out From Out Where put aside jazzy riffs, and took on a darker, colder, moodier side. Two years later, Tobin was contacted by Ubisoft to compose a soundtrack for a video game, Splinter Cell. The new approach to sound design and production, opened up a whole new world, challenging Tobin to compose individual parts which could be assembled in real-time with unfolding events. Working with the company’s sound effects crew, Tobin became fascinated with the reproduction of realistic sounds for soundtracks, named after Jack Foley, which culminated into his sixth album, appropriately titled Foley Room. At this point, Tobin finally disentangled himself from previously sourced material, and began recording his own sounds. Quickly skipping Tobin’s collaboration with Joe Chapman as Two Fingers we arrive at ISAM.

Although ISAM is entirely different in style from Tobin’s earlier works, and as such may not be instantly welcomed by his faithful followers, the album is a logical progression in sound design, experimentation and exploration for an artist with such a defined path. Listening closely, one immediately senses the amount of work and attention to detail that went into every single micro second of the record. Gone are the scratchy vinyl loops interlaced with sample triggered beats and glitchy percussion of Bricolage. Enter the tightly coupled, complex, clearly cryptic convolutions, that at times rush, stagger and fall over each other and then as effortlessly are left to pause, ponder, and catch their breath. Managed within a framework of rubber-band rhythms, pattern defying progressions, and just enough razor-sharp rumbling bass, the musical beauty of ISAM unfolds through its own metamorphosis, like an alien insect shedding its exoskeleton.

Saturated with evocative aural imagery, an in-depth listening of ISAM is rewarded with an interplanetary ascent into a world where self-aware machines use home grown brain-tissue for their neurological computation, following by an unpredictable dive into a dark cavernous space of enormous proportions where sonic frequencies reverberate through every warping surface. Stitched from self-created field recordings, found sounds, and obscure DSP-rich programming, ISAM is a microscopic exploration into the nature of rhythm and sound. Everything is composed of new and ‘made-up’ instruments, including every percussive element. Even the vocals are synthesized and gender modified – an ultimate feat in having “control over nature”. As Amon Tobin says himself at the beginning of his track-by-track commentary accompanying his full-album stream on SoundCloud: “Anyone looking for jazzy breaks should look elsewhere at this point. It’s 2011 folks. Welcome to the future.”