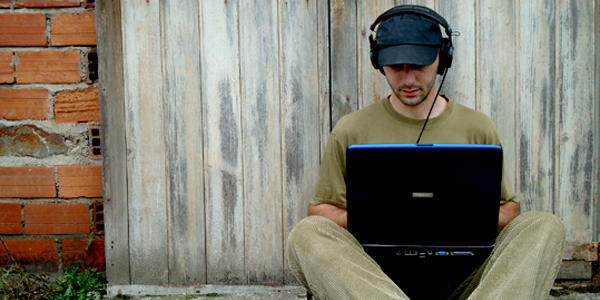 What are your reactions when your music is compared to Amon Tobin? How do you feel about being called a copycat?
It’s flattering in a way, because Amon Tobin is a legend.  But sometimes it’s a bit boring too. I think some people always try to compare me to Amon Tobin, even if it’s not comparable. My latest music is not that similar in my opinion. I can understand why some people call me a “copycat”, but to be honest, I don’t really care about people who are not open-minded. He influenced my music a lot, for sure, and that’s not a secret at all. Tobin is a sort of master Jedi to me – a role model. You can treat me as his padawan. We have similar tastes too, I guess. He somehow opened up a new way of creation, and I’m just following in his footsteps. Some follow the dubstep movement, and I follow Tobin’s. But I always try to make my music more personal. And it’s just a matter of time… I’m 29 and still a rookie. There are so many things to learn. I just want to point out that everybody is influenced by everybody on this planet, we do all things together – we are a kind of unity. Even Tobin has his musical influences. Just the fact that Tobin used a lot of samples on his songs can mean that he’s kind of a copycat too. Even if the samples are manipulated in a new way. The main idea is somehow ‘borrowed’.

What are some of the sound samples in your music?
Everything, really, from classical to hip hop, world music, psychedelic rock, hard rock, jazz, blues, experimental… there are good things in everything. I’m a music lover, and I don’t really care for the genres.

How has your music production evolved over the years?
A lot, considering that I started producing at 16. I was focused on hardtekno/acid from 20 to 25, but then I decided to make more complex music. Aphex Twin was my first inspiration and then I fell in love with Tobin’s universe. The previous albums have been produced with the same sensible techniques. For my upcoming music (new EP and album out very soon on Spectraliquid), I developed a new methodology of creation. It was a pain to be honest, it’s like changing your life… but I learned so many new things in the past few years. My music is not 100 percent sample-based anymore. I use real musicians and instruments now. Some of my friends play my own composition, my own melodies. I still use samples but it’s just 30 percent of the whole source now. I always record a lot of stuff with the mics too, for drums especially. I’ll try to improve my skills again and again over the years. I don’t want to stay focused on things that I can do, there is a lot of thing that I can’t do, so I just want to explore the possibilities forever.

What is your studio setup like? What software / hardware do you use for production?
I change my software/plugin setup all the time, I always want to try new tools. But like every musician, I guess, I’m in love with Kontakt, Kontak player. I use Cubase 5, mainly. I use tools from NI, Ohmforce, TC, Kjaehrus, Waves, Izotope as well. I don’t use hardware for production that much now. I still use my sampler AKAI Z4 and my Nord Rack 2 though, TC electronic reverb too. I use hardware especially for mastering. Compressor Avalon for instance. I hope that one day I can buy more of these tools. It’s too expensive to me at the moment. I also use Marantz recorder with quality mics for recording musicians.

What type of movie will your music be best suited for?
Dark FX with a complex story, definitely like Blade Runner, but realized by Tarantino! haha!