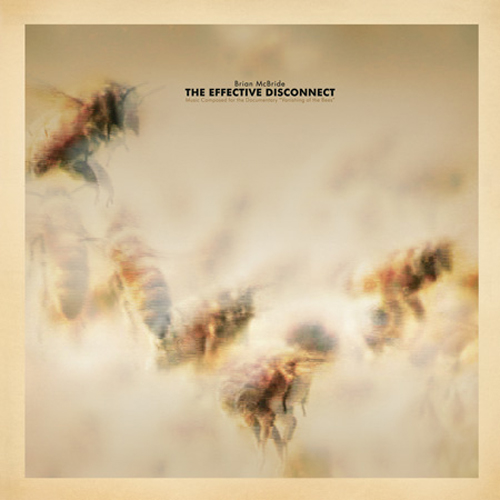 In a strange turn of events I came face to face with a bee today. It was about 3 o’clock in the afternoon and a bee slowly landed on my mouse right when I was reaching out for it. It looked weak and wasn’t at all spooked by my sudden movement. The coincidence is that I was meaning to review Brian McBride’s new album the Effective Disconnect all week, but never got to it. This album is the official soundtrack for the movie The Vanishing of the Bees, a documentary investigating Colony Collapse Disorder, a condition that is currently threatening the bees and the welfare of the people around them. I feel as if this bee was suffering the consequences of this now widespread disease.

For many people Brian McBride does not need an introduction. As one half of the duo Stars of the Lid, famous for their cinematic drones, he has been around in the minimalist ambient scene for almost two decades. Together, they literally have been setting the tone for contemporary musicians working in genres ranging from modern classical to drone. But even after hearing many artists working within a similar genre, there is no beating the real thing. And so after releasing his widely praised first solo effort When the Detail lost It’s Freedom (Kranky, 2005) in 2005 he now presents us the Effective Disconnect.

Although on first listen this record does not seem to stray far from the sound STOL got famous for, this cd does convey a very specific change in style. The on and off swelling layers of sound are still there, but there is a decreased emphasis on repetition. Instead, Brian introduces many different themes that seeminglessly flow over into each other. And even though the slow movements and stretched-outness of themes used to be one of the fortes of STOL, a increased emphasis on melody treats the listener to a very rustic yet emotional listening experience.

While striving to present the listener with a a piece that justifies the gloriousness of the bees through hopeful themes, the mood of the music quickly turns into a heavy and emotional account. I feel that “With Several Tries (in an Unelevated Style)” really conveys the gloomy tenor of the documentary. And the following track “Supposed Essay on the Piano (B major piano Adagietto) ” builds on this with a French horn melody that is supported by a sustained string section in the background.

For me the pivotal piece is “Beekeepers vs. Warfare Chemicals”. The track starts with a high pitched chime-melody and goes on with a build up of strings that finally culminates into an almost aching piano piece. After this, we are introduced to the protagonists of the documentary through isolated bee wisps that fill the silent elements of “I Know That You Don’t Like the Future Like I Do”. The slow purring sound the bee makes, feels as if this bee is also contemplating landing on someone’s computer mouse.

I read in several reviews of this cd that the change to more rapidly changing melodies is a bad thing. They were longing for the stretched horns and guitar-based drones that SOTL once brought to us. But Brian McBride has been moving away from this form of composing in favor of a multitude of motives and this was already noticeable in When the Detail Lost It’s Freedom (Kranky, 2005). I feel that this new direction is proving fruitful and as I get more familiar with the sounds, their influence over my mood increases. It’s an excellent record and a welcome addition to the record collection of anyone that likes Tim Hecker, Brian Eno, and Stars of the Lid.

Read our Two and a Half Questions with Brian McBride