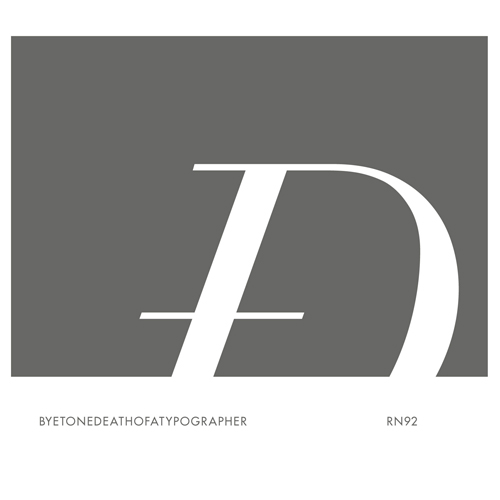 Chemnitz (Germany) based artist Olaf Bender has musically been in the shadow, as one of the co-founders of the Raster-Noton label, together with Carsten Nicolai (Alva Noto) and Frank Bretschneider (Komet). Mostly focusing on the visual presentation of the label’s catalogue, he had only produced two solo outings before offering to the world Death of a Typographer. Where his earlier projects presented us with a very abstract experience, filled with static and rhythmic clicks typical to the Raster-Noton sound, the sound of his new album shifts to a more approachable terrain.

The first track quickly exemplifies this change of character. An almost danceable bass line takes hold when “Plastic Star (session)” starts, and only slows down four tracks later, when the first segment of “Capture This” sets in. Distorted tones and short stabbing percussion can not hide the melodies that encompass the songs as we move through the album.

As Bender balances the distant and cold background, that has typified the label with a sound that scuffs against the techno-genre, the album really unfolds when “Rocky Soft” starts. You can quickly discern the Bretschneiderian jabs to your earlobes, accompanied by an almost funky bass that makes you want to move. “Black is Black” is probably the most accessible track of the album, with its almost threatening build up that finally melts in to the dark dystopic feel that both installments of “Capture This” convey. Rounding up with an almost Alva Noto-esque “Grand Style” and “Heart” filled with rhythmic yet dark percussion this album is something special.

Created in the Berlin winter, it is very well suited for those cold days when you are still coming to grips with the fact that the summer is really gone. Play this record when you feel that there is no way you’re getting out of bed. Its energy, even though it is cold and distant, is infectious, and will have you master the cold temperatures of autumn and the upcoming winter in no time. Suited for listeners that are into the Raster-Noton aesthetics, but also listeners of Sleeparchive, SND and Pan Sonic.