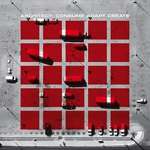 While other Architect albums have been somewhat minimalist affairs, Consume Adapt Create is crammed full of sounds… individual and myriad in number, placement and aesthetic. You might have wondered what happens when Daniel Myer is placed in a creative vacuum and allowed free reign to run as far as his imagination will take him. This is the concrete evidence of where it goes.

‘The Shadow of Eve’ is the only hint I am going to give for this record. It’s breakneck pace should confound and contuse any PA it is played through. Myer weaves in melodic lines throughout it, a hi-hat roll here… a syncopated break sped up to maniacal pace there. Power restored indeed. The connection to previous work could best be ascribed to his track ‘Sir Alfred’. Suspense drum ‘n’ bass is alive and well. There’s been a remix contest for this tune initiated by the band, it’s no accident this track was the one chosen. You have not heard him push it this far before.

One gets a healthy inoculation of atmosphere on this record, sure, there are alien peel offs into sci-fi land but more often than not it’s the overall composition which unleashes this tone. Consume Adapt Create is all about this somewhat elusive aural currency. Van Delta’s album ‘Studio Reality’ is the only thing which comes remotely close to the end result of this and even it didn’t contain as many changes in tempo or emotion. Myer somehow manages to squeeze a lot of feeling out of his machines, a feat few others have pulled off convincingly. It is as though a part of him has been subsumed and re-patterned in an electronic exorcism of sorts; it’s a lot to ask of the listener, I know, but the pay off is that by the time you do finish listening… the world is pleasantly askew.

He’s spent his time very wisely creating some masterful electronic scenes if this is the right word; each song is a soundtrack to places we have never been and worlds we never suspected existed. Christmas may have come late but at least it showed.

If you were to take Galactic Supermarket and heap on the maturity accumulated in the last twelve years by this musician you’d have a small measure of the majestic heights Myer has encapsulated here. Unlike that record, though, there’s a lot more flesh on the bones. He knows his sound design almost too well. All the time spent in the trenches of Haujobb’s love/hate existence with it’s fanbase was not undertaken lightly, neither was this record.

See also Two and a Half Questions with Architect