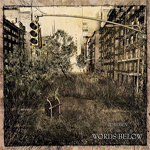 Noël Wessels wants you to think everything’s going to be okay — that the storm has passed, the survivors are carefree and strong, and that, should trouble rear its ugly head again, there’s a good chance of escape. Turns out, the kind locals are killers. And, surprise surprise, the lovable protagonist is secretly mad, and growing madder. What could have been so perfect, so hopeful or so noble is now utterly screwed up, and we never saw it coming. This is how DJ Hidden wanted it.

It doesn’t feel like two years have passed since the Dutch d’n’b producer’s directorial debut The Later After (Ad Noiseam, 2007), because 2009’s sequel, The Words Below, appears to have picked up the narrative exactly where the former left off. The world is still vastly in disrepair, but the dust has settled some, and from it emerges a new, more powerful threat. A hunter-turned-scavenger, Wessels picks through the rubble of his own devastation with an even craftier, time-tested set of breakbeats, basslines and breakdowns. His drum’n’bass DNA has mutated to the point where it can not only withstand the new wilderness, but match its hostility blow for blow.

It’s a minute-thirty into “Broken Seconds“, and I’m being chased down. I didn’t get a good look at it, but it’s big and it’s fast. I’d take refuge in an abandoned building if it weren’t for the fact that the buildings here aren’t completely abandoned. It wasn’t enough that I was on my guard. Planned a strategy. It got the better of me anyway, and now I’ve dug myself a dank little trench here in the dark. I’m as still as the grave, but I’m sure my scent will give me away. Dear God, I can feel its breath on the back of my neck. This is it.

Like its predecessor, it’s impossible not to weave some story around each track on The Words Below. From its epic opener to introspective, quasi-dubstep moments like “It Feels Wrong,” to the packaging of the album itself, care has been taken to inflame your senses, string you along, and make you get your hopes up before vivisecting you while you watch. Even those who enter cautiously are sure to be toyed with. Repeated listens may well land you dribbling in a padded cell, nightmare and reality fused, begging for mercy. DJ Hidden offers only one kind, and it’s permanent.

See also Two and a Half Questions with DJ Hidden