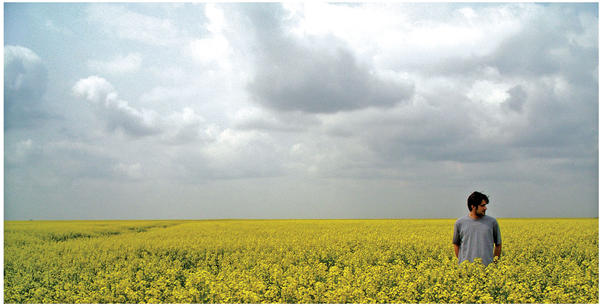 What was the most challenging aspect in composing an entire ambient album?
The biggest road block for me with ambient music is my nagging desire to make it sound more interesting. I have trouble justifying making a jazz piece last more than 3 minutes, much less something simpler. I have to keep reminding myself that I’m serving a different purpose by writing it. It isn’t for entertainment or musical thrills.

How did you come about the idea of writing a thematic album dedicated to Carl Sagan and our little planet?
I’ve always been into astronomy and astrophysics, and I’m always in some stage of reading something on the topic. At some point after Soundtrack To A Vacant Life came out, I started writing what I was calling “space music”. I had no intention of making an album at the time, but for some reason I just kept making more and more of it in my free time. If anything I thought that I’d just add it to my licensing pool or use it as a foundation for an actual score should I get offered one in the near future. Then at some point I realized that I had over a CD’s length of music. I thought about what it would be like to just leave the planet into the darkness. I went back into the sessions, made it blend chronologically to the story in my head, shaved it down to CD length, and there you have it. A funny coincidence: The day Pale Blue Dot was released, BBC Horizon aired an episode titled “Are We Alone In The Universe” that had licensed a bunch of my previous music (some released in albums and some from my film libraries). So I guess some people thought my music was extraterrestrial sounding before I ever meant it to be.

Overall, your work seems to have continuity from one album to the other. In Soundtrack To A Vacant Life, you allude to your upcoming work on Pale Blue Dot with a Carl Sagan sample in track, Suspended In a Sunbeam. Was this intentional on your part?
I wouldn’t say it was a coincidence because, to me, those words are quite possibly the truest and most important words ever spoken. I do like the idea of continuity with my albums, but this one wasn’t part of that.

You obviously have admiration for Carl Sagan. How has Sagan’s life and work influenced you and your music?
When I was an 10 years old, while my other peers were studying multiplication tables and Christopher Columbus trivia, I understood relativity and how time travel worked. This wasn’t because I was a smart kid, it was because of Cosmos: A Personal Voyage on PBS. I would lay awake in bed thinking about my own existence and how it wrapped into time and space. I became fascinated with science and figured out how to learn at my own pace. This was a turning point for me where I started getting horrible grades in sacrifice for learning what I wanted to, when I wanted to. There are plenty of astronomers and astrophysicists in the world, but none of them had the philosophical and poetic genius that Carl Sagan had. Sagan wasn’t a genius because he could tell you what a neutron star was, he was a genius because he could somehow map things out in a way that would relate your existence to it. He wasn’t scared to admit that he didn’t have the answers, but he would pass his doubts and questions on to other curious minds. He wasn’t afraid to admit that atheism is no better than dogmatic religion because it requires you to ignore the biggest and most important questions in the universe. Now that, my friend, is a man who deserves an album.

Needless to say that Pale Blue Dot was very different from your previous work, and very much cherished and appreciated. Will we see more of this work from Benn Jordan?
I plan to make more ambient in the future. In fact, lately I have a hard time imagining making an album that isn’t conceptual in some way. I kind of like the idea of splitting themes up into different albums. We’ll see how long this vacation from ADD continues though. 🙂