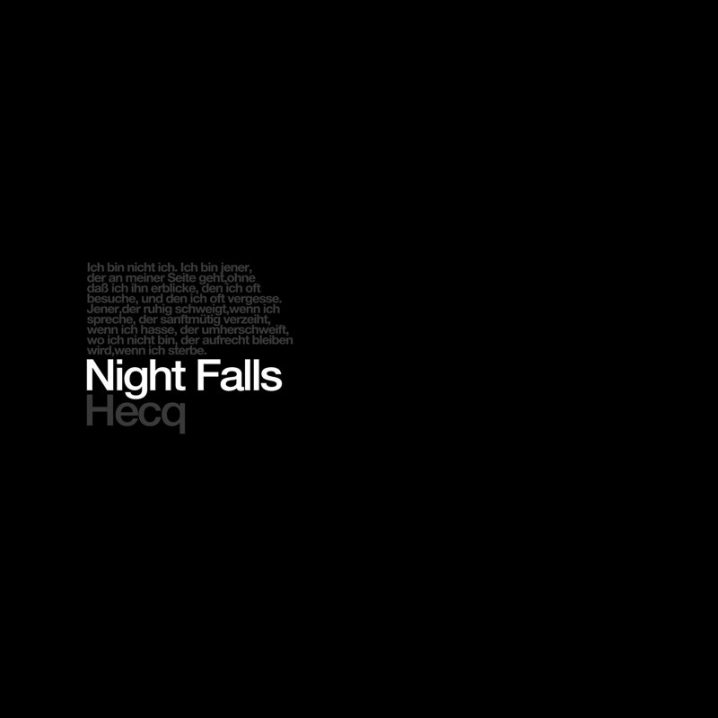 As I turn my attention from ethereal to dark ambient, it is only appropriate that I cover the latest album from one of my all time favorite artists, Hecq. Last year, I already hailed Ben Lukas Boysen’s double disk release, titled 0000, as one of the Best of 2007 albums. It perfectly aligned along my favorite elements of grandiose orchestral sound and punctuated IDM beats. Upon my first listen of Hecq’s fifth album , I anxiously await the glitchy breaks that are so prominent in Hecq’s previous albums. Alas they never come. And with this proclamation, Boysen creates a new sound in which he instantly excels.

Appropriately titled, Night Falls, Boysen drops the rhythmic structure altogether, and produces one of the most inspiring, lush, atmospheric and hauntingly dark pieces I have heard to date. There is a continuous cinematic tension of something hiding right beneath the shadow of a thinly layered sonic veil. Night Falls is an album that stops you dead in your tracks to really listen. What is that brooding sound, and does it have a name? I will not hide the fact, that with each swell of dynamic wave, the emotion within me rises as well, and I fight back the tears at the tip of each crescendo. With outstanding production and masterful control of individual frequencies, Hecq propels his sound techniques from a mere post-industrial IDM producer to a contemporary neo-classical composer. Hymen should be proud. Reminiscent of Murcof, Lusine Icl, Kattoo, Nebulo and Subheim.