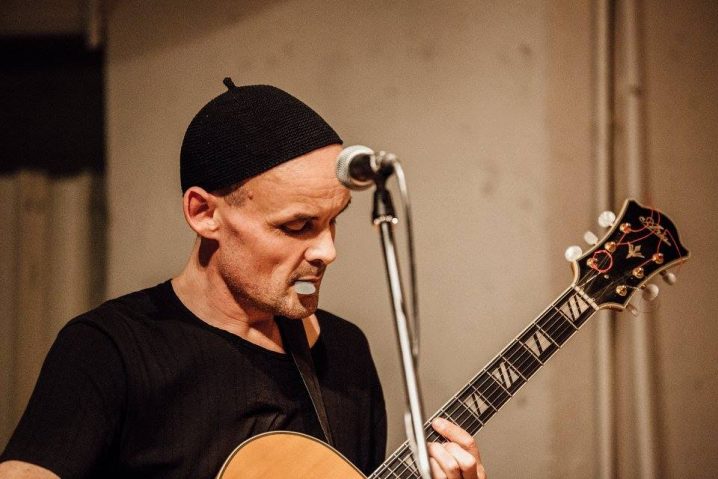 Lets start at the very beginning. Can you tell us how you got involved in composing, and what was your very first piece of gear?
I have an older brother. When I was around 10 years old we were into Hard-Rock and Jeans. So I wanted to play the guitar. I learned playing the electric-guitar by playing along to “Iggy and the Stooges”, but I also learned classical guitar at the same time. Actually I still enjoy switching between different worlds, for example, at the moment I enjoy listening to dub and punk. Anyway, my composing process usually starts with playing the guitar. First gear? I had a stereo cassette-player (SABA) with a built-in speaker when I was a kid. I recorded my voice with it, playing hit-parade… 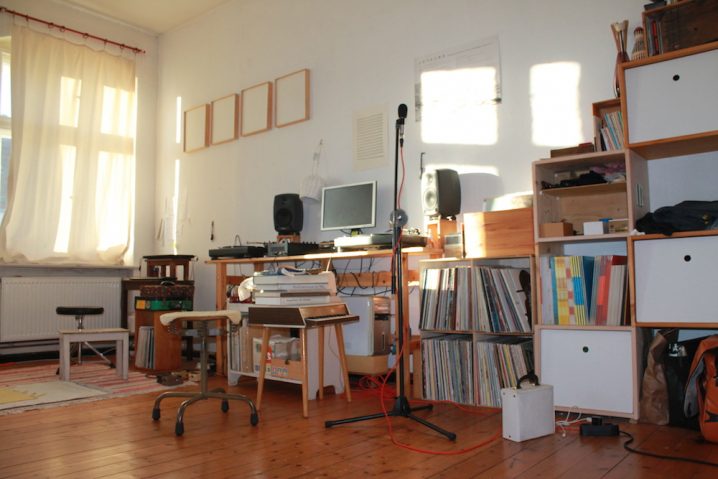 How many different studio iterations have you gone through, and what does your final setup look like right now?
After that stereo cassette-player I had a four-track tape-recorder (YAMAHA) and then an 8 track digital-studio-workstation (ROLAND). Now I record on any PC, but I often still let the signal run through my VS880 or my Gallien-Krüger bass amp and my Boss-pedals. I guess I am a rather minimalistic kind of guy, I only have very few pieces of gear. I do not collect stuff. When I didn’t use something for a year then I dump it, I don’t want it to stand around. Too much material rather holds me, like, having a weight on your feet while you want to run.. I know that’s kind of luxury problem… 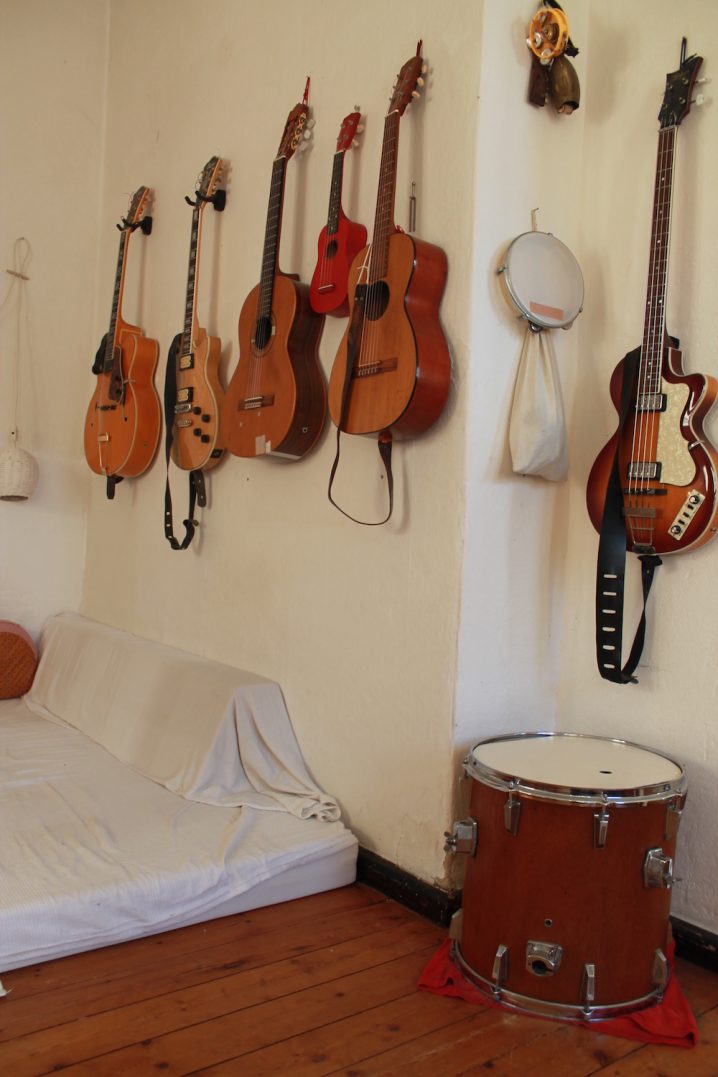 Tell us about your favorite piece of hardware.
It is still that Roland-VS880. I really like the handling, I like the effects and virtual guitar pre-amps inside. I like the size, cause you can take it to the rehearsal room, or to the countryside, or even on holidays. You can achieve an intimate situation with this tool, plus (!) you’re not staring at some monitor all the time, the monitor on that machine has the size of a matchstick, so… you cannot trust your eyes, you have to trust your ears.

And what about the software that you use for production?
Wavelab 5, sometimes feeding it with fruity-loops. 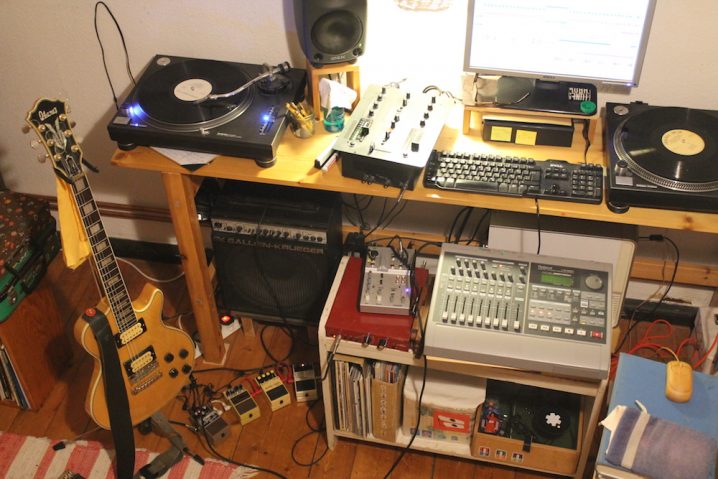 Is there a particular piece of gear that you’re just dying to get your hands on and do you think one day you’ll have it?
No, nothing particular, just the most expensive preamp in the world and the most expensive condenser mic, because I experienced that you can actually hear the price difference in that field.

Can you please share some aspects of sound design in your work?
I always try to shape the sound before it gets on the hard-drive. I first want to achieve a certain atmosphere and inside that atmosphere I want to create the musical idea, because I think it’s a feedback: the sound and the sentence that you’re phrasing. Also, I like the idea that the listener gets into the same cloud that you were in when you actually gave birth to your musical idea. You know? And later, while you do the producing and mixing, your contact is much weaker, you’re not at that core anymore, you’re designing the… appearance, let’s say. 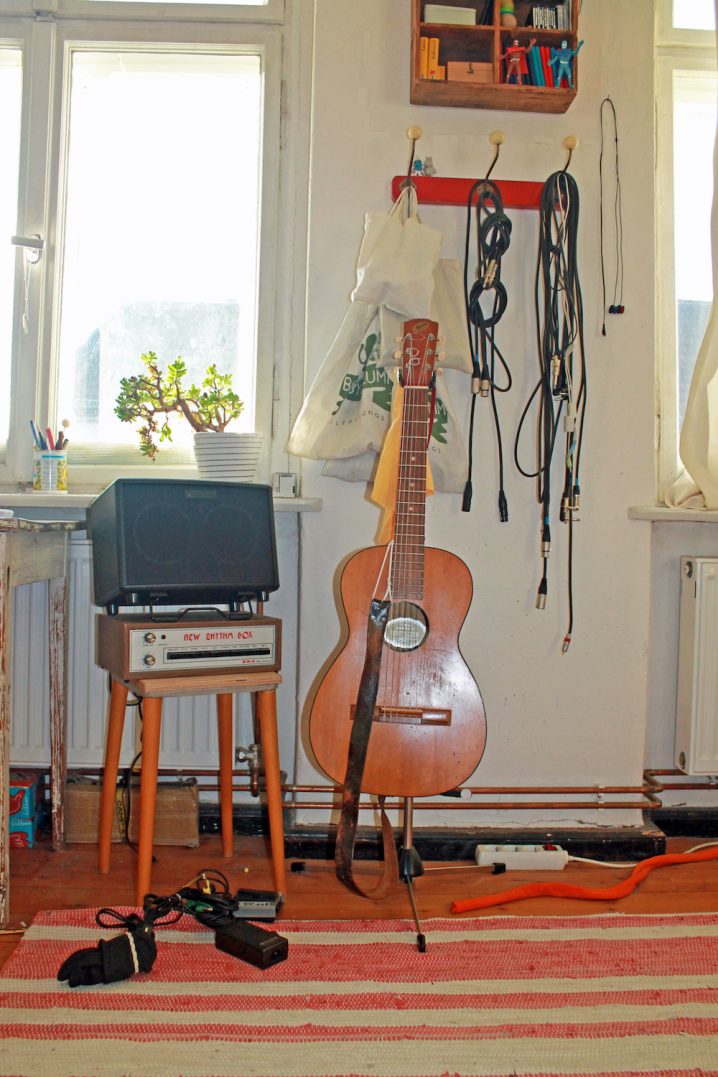 Any particular new techniques that you tried out for your new album?
On my last record I was singing a lot, so, after I recorded my voice I did send my vocals back on a guitar amplifier, used distortion, prepared membranes and I recorded the signal with microphones, as if the speaker was my voice. I did send everything to my Marantz tape-recorder, leveled to the max, saturated tape, because the Marantz has a limiter and I really love that sound when you hear the limiter and the tape. 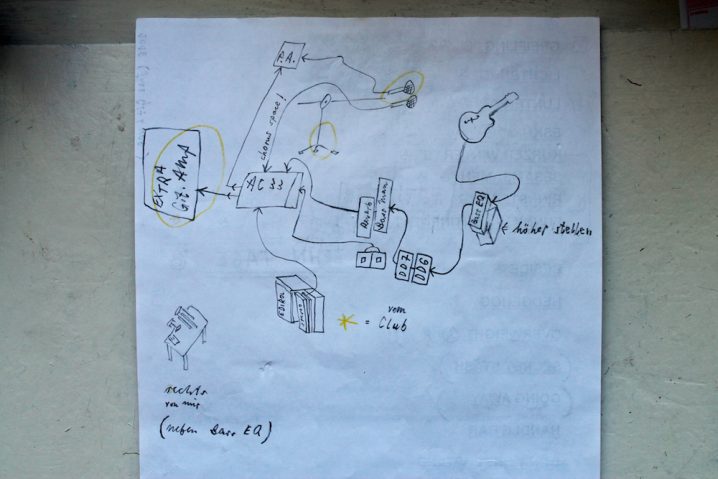 What does your live setup look like, and what do you bring with you when you travel for an extensive tour?
You can see my live setup as a sketch on the above pic. I bring the following: Classical Guitar, Boss-Bass-EQ (GE7B), Boss-DD6, Boss DD7, Boss-Bassman, Boss-Fender-Reverb, Roland R-05 wave-recorder, Boss-FV50 volume-pedal, Roland AC33 acoustic amp with built-in Looper. Then lots of tiny noise- and toy-instruments and finally, in case I bring the jazz guitar, I ask the club if they can provide me with a Fender-Twin-Reverb or a Roland-Jazz-Chorus. Oh man I really should get sponsored by Roland/Boss 😉 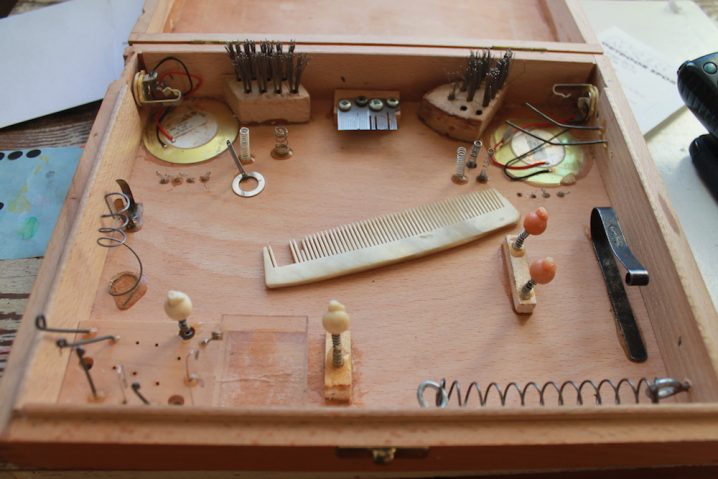 What is the most important environmental aspect of your current workspace and what would be a particular element that you would improve on?
I record at home, and I have a walk-through room, so, first I would change that and then I would ban the tram, ban the cars, ban the neighbor… hmm… I actually should shift my studio into a 100 square-meter detached house with ocean view.

What can you tell us about your overall process of composition? How are the ideas born, where do they mature, and when do they finally see the light?
Again… still… it always starts with the guitar… that’s where it grows and grows up. 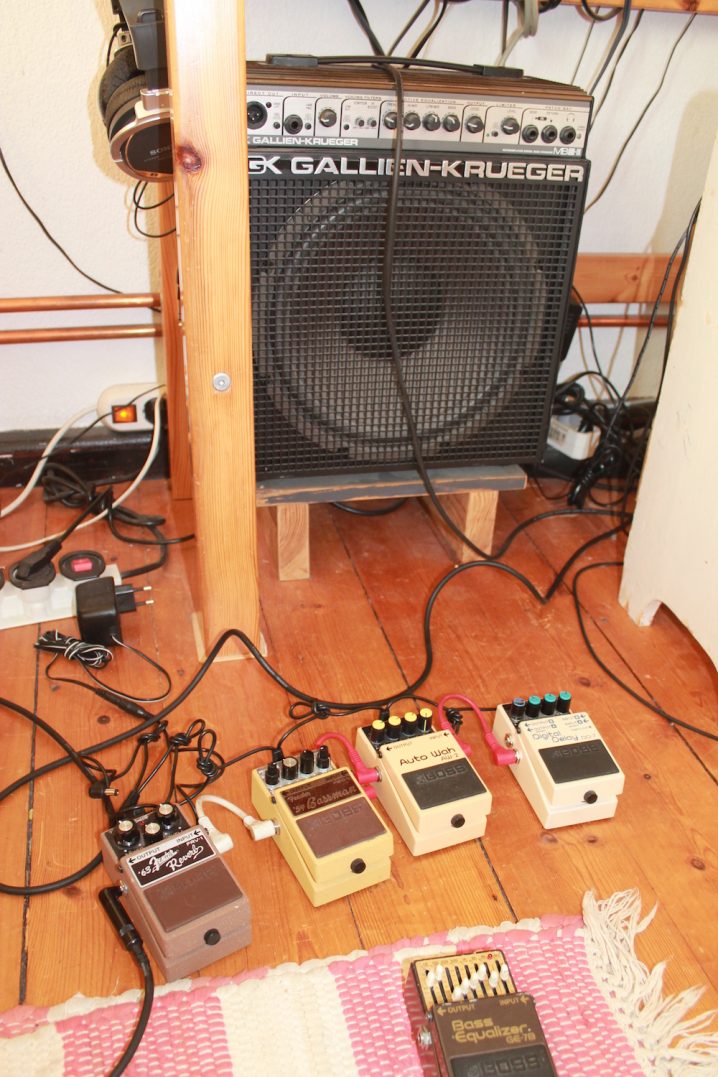 After the piece is complete, how do you audition the results? What are your reactions to hearing your music in a different context, setting, or a sound system?
I return to the first sketch, I play that sketch and then I let it grow again into a new direction to gain a live version of that idea.

Do you ever procrastinate?
No 😉 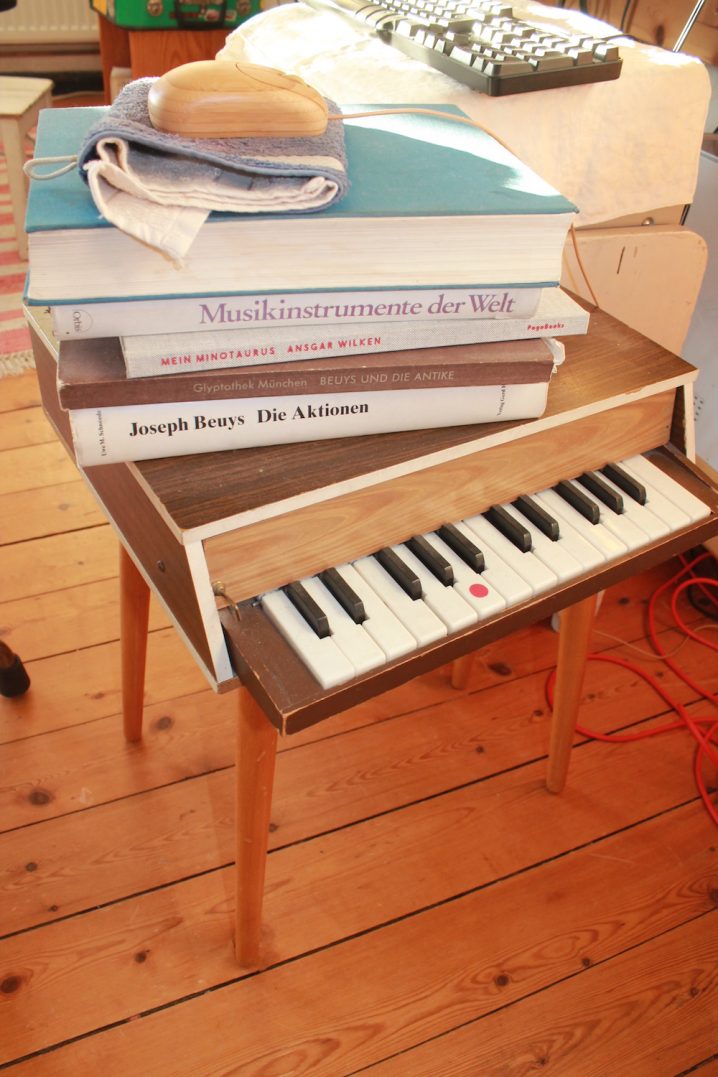 What gets you inspired?
Playing with other people, talking to people.

And finally, what are your thoughts on the state of “electronic music” today?
Sorry, I’m afraid, I’m not the right guy for that question, I really listen to few contemporary electronic music, I like some digital dub, for example the music that you can find on that label “jahtari”… well but even that music is not 100% “todays electronic music”, cause in my opinion, it’s based on something that Prince Jimmy discovered 30 years ago: “computerized dub”. 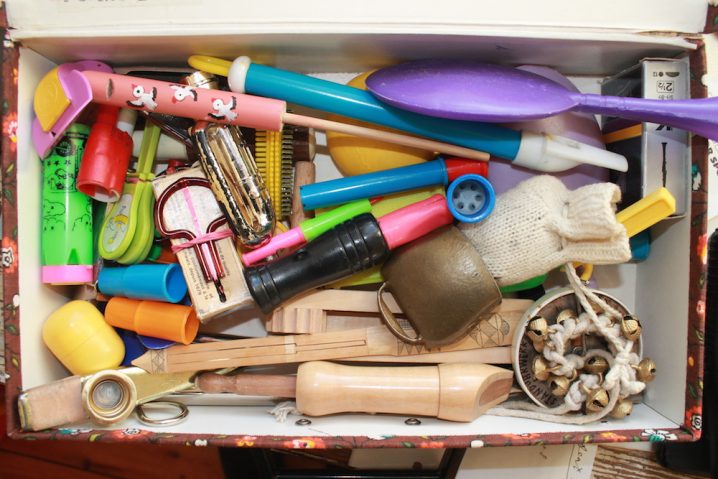