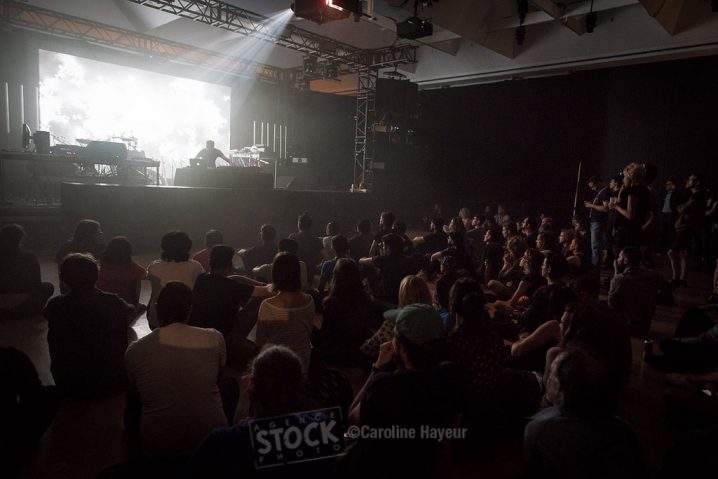 My Thursday MUTEK experience began back in the main room of the Musée d’Art Contemporain (MAC), where Montréal based Jesse Morrison, performing as Fake_Electronics, warmed up the gathering crowd with his filtered sweeps and micro-glitchy tech-housy rhythms, all bathed in a pool of dubby minor chords. These analog sounds blended with the gray-scale projections of abstract structures by Ewerx, and I made a mental note to checkout Morrison’s other work, along with his projects as Ana+one and Yes Ma’am, all appearing on the Canadian HushLamb imprint.

Before I knew it, Dasha Ptitsyna Van Celst setup an impressive stage presence, presenting Antarctic Takt, a monochromatic A/V performance in collaboration with videographer Stanislav Glazov. With a short introduction, reflecting on the injustices of today’s society, Dasha Rush invited the audience to “come with me on a ride to my imaginary abstract Antarctica.” Drone sweeps, punctuated with rhythmic clicks and slow mutating throbbing bass covered the icy molecular fractals, depicting remote regions of southernmost continent shimmering in the polar lights. The arctic sculptures drifted like icebergs, nudged slowly by sound, occasionally stripping away their textures to reveal the naked wireframes.  This Russian-born experimental musician has only recently appeared on our radar, no doubt indebted to her signing on Raster-Noton records, with the 2015 release, Sleepstep – Sonar Poems For My Sleepless Friends.

Following up on his performance from previous appearance at Mutek as Nonotak, Takami Nakamoto invited Sébastien Benoits to play with him in a live drumming accompaniment for a world première of Reflections, an elaborate lighting set up of stroboscopes, projectors and 32 LED bars. With their semi-industrial rhythms and electrifying IDMesque oscillations, Nakamoto feverishly twisted his body in sync with the knob turns, as the array of vertical bulbs lit up the horizontal pathway in smoke cloud.

At the peak of the night Atom™ & Robin Fox presented an immersive live performance, titled Double Vision. For this particular showcase, I pushed my way to the front of the stage, but Robin and Uwe were nowhere to be found. The kaleidoscopic structures and granular abstract imagery danced on the screen of the empty stage, perfectly synchronized with Schmidt’s surgically precise glitchy patterns. I turned back towards the source of light and realized that both artists played from the sound engineer’s perspective, in the back of the room. Making my way rearward and now facing the crowd and the screen as if from the last seats of the movie theater, I realized why. The lasers didn’t just project some intricate patterns, they swept the smoke-filled space to create an amalgam of multicolored lights directly on my retinas. “R G B | L E D | V C R” – it was as if the sonic spectrum of the saw-toothed bass transcended into the visible frequencies of the laser.

But downstairs, in the smaller room of the museum, Richard Devine captivated his cult following with an incredibly intricate all-analog modular set. The complex circuit bends and twitchy living organism bordered (and dare I say exceeded) some of my all-time favorite Autechre sets, layered in warm pads, and even darker, liquid bubbling glitchy pulses. At times my mind would drift among the twitchy disconnected  bleeps, only to be brought back and tied together in an entangled labyrinth of percussive rhythms, lurching with their scratchy and prickly hooks. For an ultimate sonic taste, check out Devine’s 2012 Risp LP on Detroit Underground, as well as his Analog Voodoo Effect clip appearing on I Dream of Wires – The Modular Synthesizer Documentary. 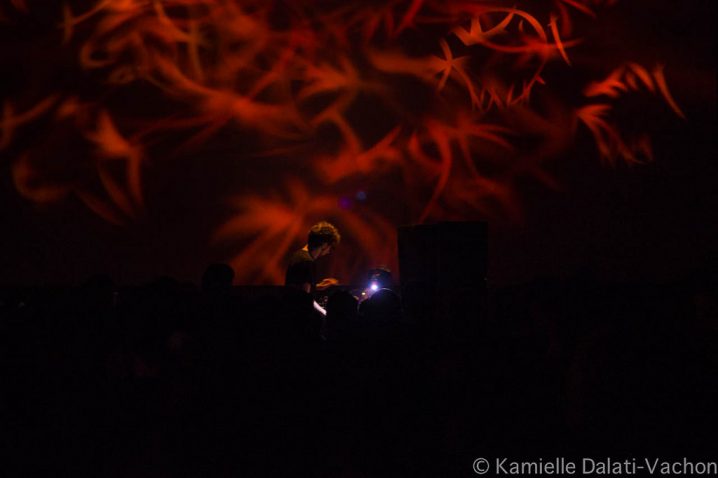 At this point, my mind was properly tangled, and, honestly, it was a bit difficult to concentrate on a much mellower and warmer modular set follow-up by Lucy. So, knowing that I would be able to catch Luca Mortellaro for yet another performance later in the week, I quickly made my way back upstairs for a final glance at Lumisokea‘s set of gloomy, obscure, and hollow rhythms. I highly recommend the group’s 2012 LP on Eat Concrete titled Selva, as well as the followup release, Apophenia on Opal Tapes. Fighting the last minutes of my aural fatigue, I finally decided to call it a night, retiring for anticipation of the following two nights of MUTEK.