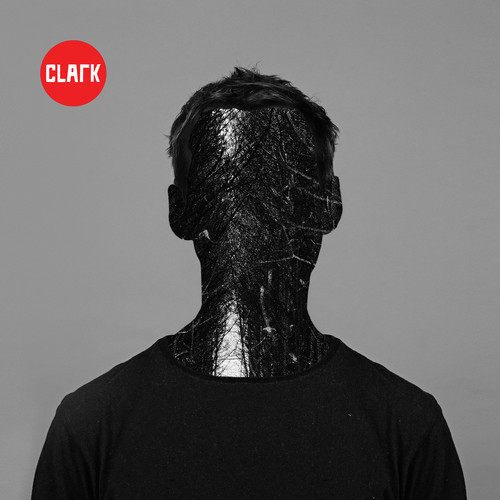 “Music is like sculpture. It’s like trying to capture a moment of ultimate momentum, and distill it forever. An invincible, sealed capsule of sound”. – Clark, August 2014

In order to give the latest self-titled record by Clark all the praise that it’s due, I feel like I must first go back. Go back, perhaps to the very beginning and spend hours listening again. I’ve always enjoyed Chris Clark‘s flavor of idm-meets-techno with its glitchy synth-swirling roughness around the edges, hiding its musical fidelity and beauty beneath the many layers of delicious grime. I’ve been a fan since Clarence Park (2001), and Empty The Bones Of You (2003), since Body Riddle (2006) and especially since Turning Dragon (2008). Clark seemed to be unstoppable with Totems Flare (2009), and even with the gorgeous Iradelphic (2012) he could do no wrong. It also seemed that with the latter, Clark took a side-step from his atmospheric dark electro bruising beats, towards a somewhat organic, acoustic and vocal study – a turn that I have welcomed and highly praised.

With the self-titled Clark, the English electronic musician takes a retrospective look at himself, while somehow managing to black out his existence, as evidenced by the fascinating cover art, reserved for projections of imagery upon the outline of his hollow face. And although there is a hint of nostalgia in some of the post-techno pieces on the album, it’s not exactly melancholic at its core. After a brief cinematic opening, thick with moody pads and processed strings, the storm erupts into a growling slow-moving stomper of “Winter Linn”, full of lo-fi textures, running arpeggios and raw, unsuppressed thunder.

The tempo picks up with “Unfurla”, a piece full of Clark’s staple touch, from complex melodies to the primordial pounding beats. The production of the album feels to be the opposite of those German pristine surgical rhythms, and instead celebrates its coarse and rugged approach by fully drenching all of the sounds in the reverbed, unswept, and a bit noisy room. This is something I mean to express in a positive light – the overall perception of this unique flavor of techno is less that of well-oiled precision machine, and more of an evolving biological beast. A monster with sodium trimmers…

“I wanted to let the weather in with this album”, Clark explains. “It’s outward looking, it’s drenched in sounds of the outside world, sounds free from human intervention: branches crackling in the wind, storms brewing, the stillness of settling snow. It’s all in there, amongst the moreish crunch of industrial machinery”.

Gone are the few gentle guitar strums and vocals progressions we heard on Iradelphic. Instead, Clark unleashes an uncompromising downpour of ideas collapsed between eroded rebar and concrete. Such is the psychedelic dark electro taste of “Banjo” – a surprising drumfire in the midst of Clark. And just when you feel like you have grasped the theme, the “Snowbird” swoops and steals your sound mind. The remainder is a rubbery, stretched concept of a sonic sculpture, thrown over your spinning head like a plastic bag, leaving you in panic, grasping for air, and scarce melodies that Clark has left behind like a few breadcrumbs in his labyrinth. And just before your eyes roll back into the head, the tension breaks and you begin to dance…

I know that I’ve taken some liberties with language and surreal imagery in this recommendation, but with this particular release it’s hard to find the words to capture every single turn. It is precisely why Clark’s kaleidoscopic environment, leaves so much more behind in each and every single play. And then I’m coming back for more! Clark’s seventh full-length LP is once again released by Warp Records. A limited edition album bundle will include a 12″ Edits with remixes by Marcel Dettman and Pariah via bleep.com.