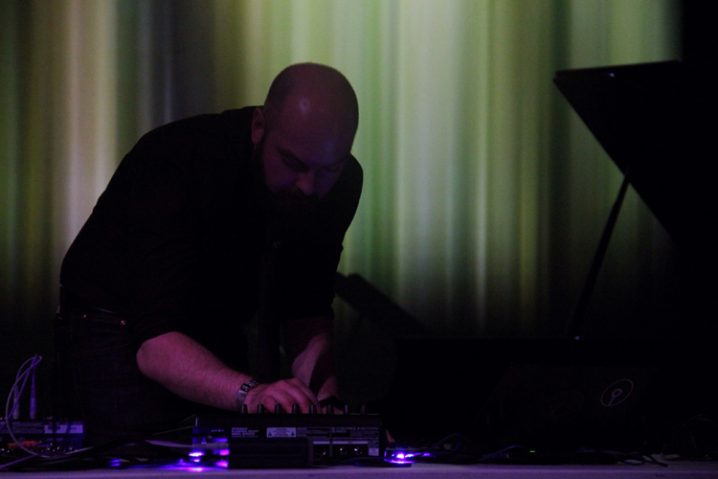 This was my second year in a row making the trip up to Seattle for Rafael Anton Irisarri’s Substrata Festival, but this year, I approached it a little differently. Whereas last time I put together a festival preview and spent time looking into the artists involved, this year had afforded me enough trust in what Rafael would curate, and I put my OCD to one side. Apart from Markus Guentner and Mika Vainio, I wasn’t familiar with the other artists set to perform – and I felt pretty good about leaving it that way.

The festival was once again held at the beautiful Chapel Performance Space in the Wallingford District of Seattle, perfect for the hazy Seattle summer evenings and an intimate space for the attendees to immerse themselves in over the next three days. 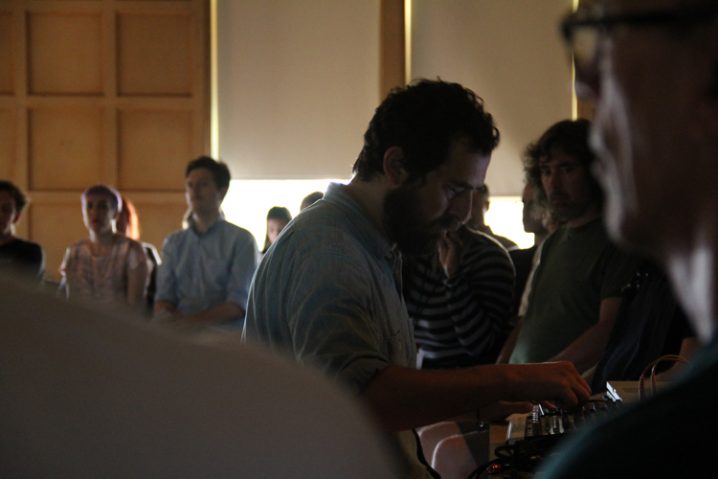 Thursday night began with Gregg Kowalsky taking his performance close to the audience and echoing Raf’s purpose for the night: “The composer as both the outrider and map-maker in their simultaneous manifestation and guidance through geographic, abstract, cosmic, oneiric non-place”. Subtle cracks came to life through numerous tapes played back through the mics – a constant puppetry by Greg as he flicked between minimal analog hardware inputs and three portable tape-decks. Short and sweet, I couldn’t help but want more from Gregg’s creaky, intimate sounds.

New York City based Julia Kent took to the stage and immediately changed the mood in the room. As the sun began to set, Julia settled down bare-footed with her cello and quickly began looping numerous string parts, conjuring up the presence of multiple instruments and compositions depicting the drama and emotion from an epic film. Gently acknowledging the crowds reaction to each short but sweet performance, Julia played through to a dramatic ending and remains one of my favourite acts from the festival.

There are no headliners at Substrata, but Markus Guentner was my biggest anticipation of the week. With his modest set-up, including his notorious PC (Markus loves to sign off emails with “sent from a PC”) adorning an ASIP laptop sticker, Markus wasted no time getting stuck in to his beautifully textured pop-ambient sound, progressing through layers of signature textures and recognisable elements. It was, as expected a pure joy to consume in this environment. 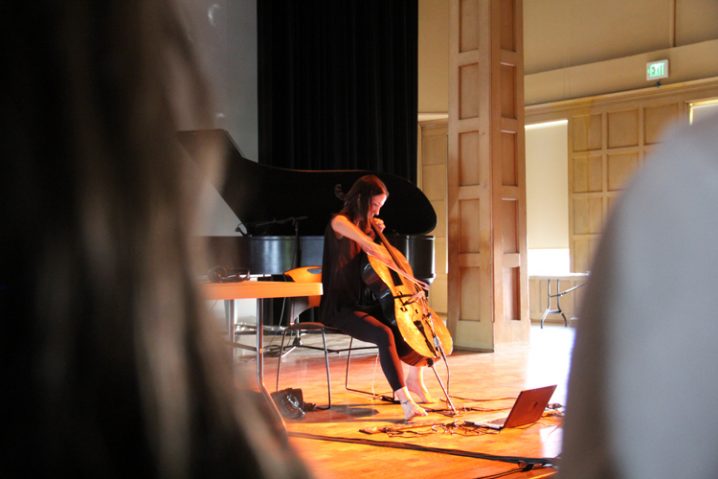 Friday played host to “the evolving field of electro-acoustic composition in it’s intersection with fringe pop, folk, improvisation and non-rock form” starting with Australian Sanso-Xtro. Her set began with random synth-stabs, never confirming to melody, rhythm or pattern and to be honest, it lost me entirely. But when she picked up her guitar and gently strummed home a repetitive melody peppered with tiny string flicks, (and what I’m sure most people would recognise as great guitar playing), she made amends and I began to enjoy her unorthodox and experimental approach.

Koen Holtkamp followed, sat stern behind his analog equipment to the right-side of the stage. I quickly fell into Koen’s subtle shifts and expansive ambience as he masterfully grew his sound to a cacophony of synths pounding through the speakers from all four corners. By the end of his set I felt like I was sat in the middle of a square room of TV screens, lit with brightly coloured circuit boards. It was a modest yet powerful performance.

Raf’s personal hero Carl Hultgren (from Windy & Carl) closed the Friday evening with an ever expanding wash of shoegaze. It was nondescript, yet perfect – I felt myself nodding off numerous times as he gently caressed his guitar into the ears of an audience lulled into every millimeter his fingers moved across the strings. 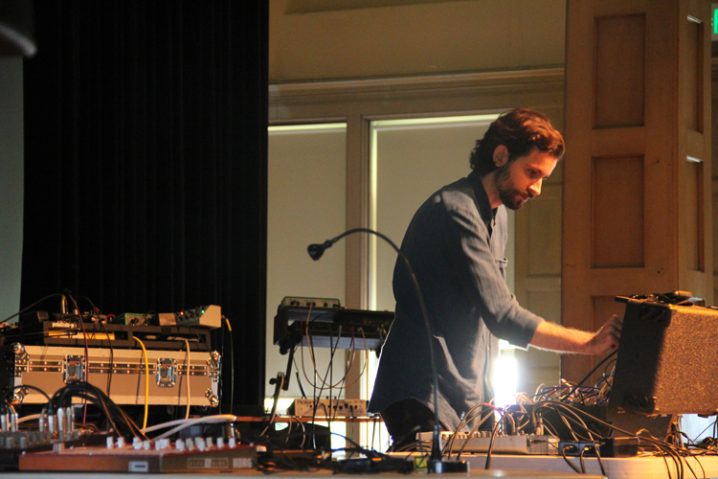 If the Saturday night from last year was anything to go by, it seems like Rafael saves the more epic and immersive characters for the closing night. This was no different, as upon entry, the stage was adorned with hundreds of cables depicting an analog synth heaven: “the night’s performers are all sculptors of ambient sonic narrative created from the colluvium of sound’s rawest materials” and a night in which Raf decided to take up the position behind the mixing board – “Bring earplugs” he said.

Evan Caminiti stood at the front of the stage emotionless as he took to melding, mixing and plugging his world of wires. His pulsating electronics slowly evolved into beautiful landscapes – a feat I still struggle to understand when there’s no single laptop involved – my lack of understanding of analog hardware showing, but my appreciation for it growing, especially after performances like this.

Mika Vainio – one half of the minimal electronic duo Pan Sonic, upon closing all the blinds and turning off the lights, sat in the middle of the stage with just a single lamp shining on his analog synth set-up. Stern faced, the familiar stabs hit hard and I could tell Raf had raised the levels. Non-confirming yet rhythmic, Mika slowly but surely built his glitchy structures from nothingness into full-on head-ringing bangs of the purest, most appreciated sounds possible from the equipment at hand. A true master of his art, there were five seconds in-between beats at times, and I felt myself itching for it go on one more time, harder, louder and bigger as he aggressively plunged and stabbed synth cables, creating a raw and unforgettable musical experience. 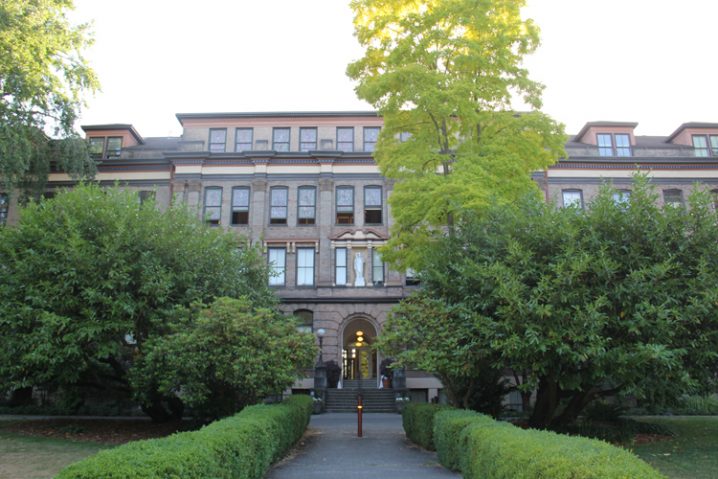 Seattle-based Mamiffer took to the stage to close Substrata 1.4 – the only use of the grand piano helmed by Faith Coloccia, with Aaron Turner taking the lead-presence on stage behind the guitar. Dark and intense, drones were soon shattering around the space with the subtle and quaint voice of Faith and her keys tinkering in the background; unplugged from the main output, i’m pretty sure this was on purpose to help create a sense of depth for the audience and to let the power of the guitar shine through.

A continuous piano and melody and a sweet looping voice were a stark contrast to the sheer strength coming from Aaron’s guitar, and whilst the first 10 minutes seemed a little unsettling, the next 15 or so absolutely blew my mind as Aaron slowly progressed his drones from high-pitched streaks into raw, bone-rattling depths of solid colour. The contrast worked beautifully and the progression was timed to perfection – injecting subtle tonal shifts as the piece grew higher, louder and bigger. Mamiffer’s performance was dark and poignant. 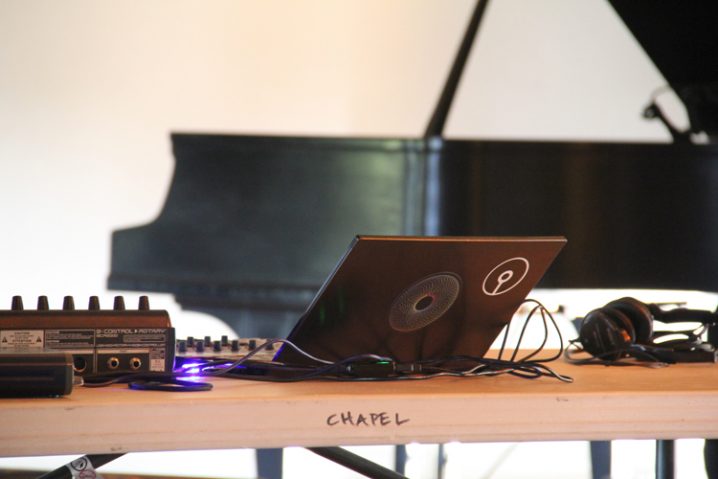 As I walked out of the space that night, I didn’t hear anyone say a thing. Nobody needed to talk about how good that was; how much better one artist was over another; or what they were doing next after the show. When you are immersed in the performances you see at Substrata, you are paying witness to music in its purest form – a vision that Raf pays very careful attention to crafting and a vision that has profound effects on those lucky enough to enjoy it in these settings. It’s not about the individual artists, it’s the overall experience you walk away with.